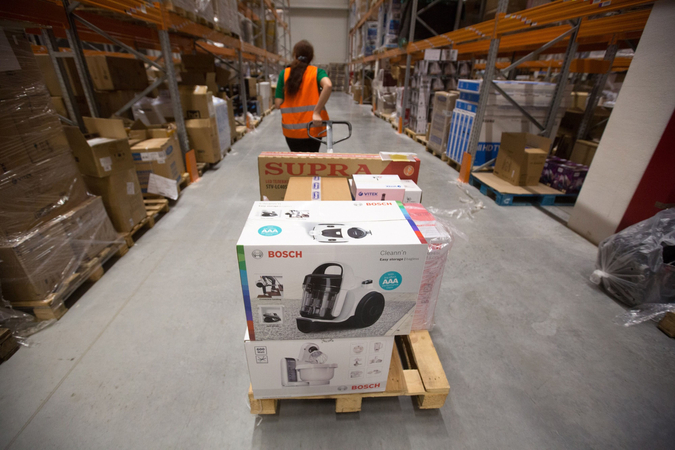 A worker moves electronic goods across the warehouse in the e-commerce distribution center operated by Alibaba Group Holding in Domodedovo, Russia, on Feb. 4, 2019. MUST CREDIT: Bloomberg photo by Andrey Rudakov.

The Chinese e-commerce leader forecast growth in revenue this year of at least 27.5% to more than 650 billion yuan ($91 billion), a deceleration from the previous year's 35% and below analysts' estimates. It also reported a better-than-expected 22% rise in March quarter sales to 114.3 billion yuan, but it marks the slowest-ever pace of revenue expansion.

Online shopping began to bounce back from March, executives said Friday. But the tepid results demonstrate the world's second largest economy has yet to fully shake off covid-19, with consumers still hesitant about spending on big-ticket items. Asia's largest corporation is tackling not just a record slowdown in its home market but also the rise of rivals such as ByteDance and Pinduoduo. Total e-commerce in China rose just 5.9% in the coronavirus-stricken quarter, less than a third of 2019's pace, according to government data.

Alibaba has lost more than $40 billion of market value since the coronavirus first erupted in January, and now has to grapple with not just an uncertain global economic environment but also any potential fallout from U.S.-Chinese financial tensions. On Friday, executives sought to assuage concerns about a U.S. bill that mandates much closer accounting scrutiny of U.S.-listed Chinese companies and may bar them from American bourses.

Chief Financial Officer Maggie Wu said Alibaba's financial statements have been consistently prepared in accordance with U.S. GAAP accounting measures and were beyond reproach. "The integrity of Alibaba's financial statements speak for itself, we have been an SEC filer since 2014 and hold ourselves to the highest standard," she told analysts on a conference call. "We will endeavor to comply with any legislation whose aim is to protect and bring transparency to investors who buy securities on U.S. stock exchanges."

The bigger short-term challenge is in reviving growth: Alibaba's bread-and-butter customer management or marketing business grew just 3% in the March quarter. The Tmall operator is going head-to-head with social media and gaming giant Tencent Holdings Ltd. for internet leadership in everything from online media to payments and cloud computing.

Net income was 3.2 billion yuan, down 88% from a year ago when it booked an 18.7 billion yuan one-time gain on investments. In February, Alibaba declared a waiver of some service fees for merchants struggling financially during the outbreak on its main direct-to-consumer Tmall platform. In April, the company rolled out a new 10-billion-yuan subsidy program for Tmall users to buy electronics, encroaching on JD.com's traditional turf. These initiatives may further compress margins for the June quarter.

But executives were confident in a gradual e-commerce recovery over the year. Beyond its main business, younger divisions such as its cloud computing arm should buoy its bottom line. That division's revenue jumped 58% in the quarter.

"Despite a challenging quarter due to reduced economic activities in light of the COVID-19 pandemic in China, we achieved our annual revenue guidance," Wu said in a statement. "Although the pandemic negatively impacted most of our domestic core commerce businesses starting in late January, we have seen a steady recovery since March."