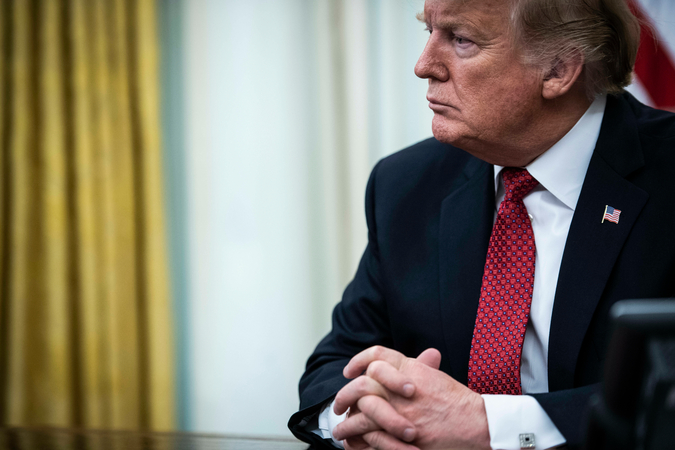 Through three years of economic conflict, the United States and China have erected tariffs that squeezed trade. They have clashed over the telecommunications firm Huawei and the flow of strategic semiconductor technology.

Now, as tensions between the two powers flare over the covid-19 pandemic and the fate of Hong Kong, prospects are rising that the trade and technology war could expand into a volatile new front: finance.

The dimensions of the conflict broadened this month when President Donald Trump moved to prevent a federal retirement fund from investing billions of dollars in shares of Chinese companies. Days later, the Senate unanimously passed a bill that would require Chinese firms listed on U.S. stock exchanges to provide transparency about their finances and ownership to auditors. The measure, if signed into law, could force scores of Chinese firms to delist from the New York Stock Exchange and the Nasdaq.

This week, the stakes ratcheted dramatically higher after U.S. lawmakers proposed sanctioning China's banks if the ruling Communist Party moved ahead with legislation that would undermine Hong Kong's autonomy. The Trump administration is expected to respond to China's passage of a Hong Kong national security law - perhaps by revoking U.S. trade privileges - but it's not clear if that will take the form of financial sanctions.

After squeezing the flow of trade, technology and visas, U.S. moves to choke off capital could present the biggest challenge of all for a Chinese economy that, despite its size, remains highly dependent on an international financial system dominated by the United States. And in China, an increasingly urgent debate is unfolding about whether - and how - the country could weather that pressure.

In recent months, former Chinese finance minister Lou Jiwei and prominent advisers have warned about the inevitability of Washington escalating its tactics from tariffs and technology restrictions to all-out "financial war."

Domestic commentary has reached deafening levels, calling on Chinese companies to prepare to be denied international financing and for China to hasten the development of a new digital currency and alternate global payment system with friendly states such as Russia, Iran and Venezuela that would operate beyond the reach of U.S. sanctions.

Hawkish Chinese commentators have revived the perennial threat that China could sell off its $1.1 trillion hoard of U.S. Treasurys, which would roil the U.S. and Chinese economies alike.

"It's really unfortunate to see the U.S. start warring again not only on technology, but on investment," said Wang Huiyao, president of the Center for China and Globalization think tank in Beijing and an adviser to the Chinese cabinet. "OK, the U.S. has advantages with its financial system. But that's not going to last forever. It could be short-term. It'll only force China to accelerate developing its own system."

The Chinese concerns are existential. They extend beyond the likelihood that its U.S.-listed companies - totaling more than 150 and worth more than $1.2 trillion in 2019, according to a congressional report - may be withdrawn from NYSE and Nasdaq. In an extreme case, the thinking goes, U.S. restrictions on investment would curb the Chinese economy's access to dollars, which it increasingly needs to pay off debt and buy everything from foreign companies and computer chips to oil and grain. Although China maintains $3.1 trillion in foreign-exchange reserves - the world's largest - that war chest has plummeted by 25% since 2014 as the government has tried to prop up the yuan while the economy slows and Chinese firms and families whisk their assets abroad.

Rising aggression from the United States is only reinforcing Beijing's determination to carve out space for itself beyond the reach of U.S. financial power, Wang said.

China's years-long ambition of internationalizing the yuan has progressed slowly, with only 2% of all global transactions conducted in the Chinese currency. But after President Xi Jinping designated blockchain one of the country's top innovation priorities in November, China pushed ahead last month with trials of its new digital currency in several cities, the early tentative steps that could one day lead to freedom from relying on the dollar for international transactions.

"The U.S. may gain a temporary advantage, but they will drive division in the world," Wang said. "They might regret it."

For now, the primacy of the dollar and the pivotal role of the U.S. banking system mean China's banks could be instantly hobbled in the event of U.S. sanctions. That seemed almost unthinkable a few years ago, but in introducing the Hong Kong Autonomy Act this week, Sen. Patrick Toomey, R-Pa., a member of the Senate Banking Committee, explicitly said he crafted legislation that holds leverage over Chinese banks and hence Beijing.

"When business and financial interests realize that this is a tool that can be deployed, I think there's going to be a whole new level of pressure on the government" to refrain from undermining Hong Kong's autonomy, Toomey told reporters.

The Chinese economy "for the foreseeable future will be dependent on U.S. dollar transactions," Toomey said. "So I think these sanctions we've proposed are likely to be very, very powerful for a very long time."

For now, it's not clear how far the Trump administration would be willing to go to restrict investment from China or whether it would be feasible. U.S. financial regulators have worried for years that Chinese companies were trading in the United States while flouting disclosure requirements, citing Chinese national security laws that demand corporate secrecy.

But in an interview with Fox Business this month, Trump expressed hesitation about forcing these Chinese companies off U.S. exchanges en masse because they might list instead in London or Hong Kong - a "Plan B" that has already been voiced by prominent Chinese executives such as Robin Li, who heads the internet search company Baidu.

Still, observers say new measures could hurtle unpredictably forward at a time when the attitude toward China is almost universally hostile in Washington.

Just eight months ago, plans to restrict pension investments and delist Chinese companies that do not meet audit requirements were aired by administration officials but quickly fizzled. This month, both proposals moved ahead, with the financial auditing bill sponsored by John Kennedy, R-La., sailing with through the Senate with almost no discussion.

Trump "loves tariffs to death, but on things that would have an impact on financial markets, he doesn't always like that," said a former White House economic official, speaking on the condition of anonymity to discuss the president. "But it's clear there will be more proposals to further weaken financial ties, and in the post-coronavirus climate, things can happen very quickly. It's almost scary."

China hawks in Washington, including Sen. Marco Rubio, R-Fla., have pressured market indexes, against which trillions of dollars in passive investments are benchmarked, to exclude Chinese companies, particularly makers of surveillance or defense equipment. Others want to go further to use Securities and Exchange Commission regulations to discourage institutional investors from buying up shares of an economic rival.

In a statement, Rubio said he would "continue to work with my colleagues in a bipartisan fashion to address this issue and ensure that the Chinese Communist Party cannot exploit U.S. capital markets" to undermine the United States.

As talk mounted in Washington this week about potential U.S. measures against China, the party-run Global Times newspaper published a series of stories warning that financial war would be calamitous for the world.

"If Trump takes on China in the financial field, he would roil the global markets as such a war would certainly go beyond Chinese and U.S. markets," an editorial said Wednesday. "No developed countries could shelter their open financial systems from the shocks. The Trump administration needs to think about consequences before taking any reckless moves, because no one knows how fast market risks could spread and what crisis they may cause."

Wang Wen, director of the Chongyang Institute for Financial Studies in Beijing and adviser to several ministries, said he believes the Trump administration won't carry out progressively more extreme measures, such as outright banning pension investments in Chinese stocks, because of the "deep power" of an abiding force in America: Wall Street's thirst for returns.

"D.C. hawks want to prevent private capital from investing in China, but it's foolish for them to suppress American profits," Wang said, noting that China in fact lowered decades-long barriers on foreign capital this year in response to U.S. investor demands.

"The profit-seeking nature of capital determines that China is still one of the most sought-after markets," he said. "Whoever loses the Chinese market will lose the future."

In recent days, China's internet, which is often filled with lively financial commentary, has burst into heated discussion about the implications of a financial struggle against the United States. Some commentators urged businesses to prepare for hardship. Others asked Chinese mom-and-pop investors to plow their savings into the domestic stock market to help the development of the motherland.

Most respected voices were more measured - but anxious.

"If the United States initiates a financial war . . . we have to clearly recognize we don't have the advantage and take all precautions," wrote Ren Zeping, an influential economist at the Evergrande property conglomerate. "It's now necessary to elevate the financial war to the strategic heights of national security."