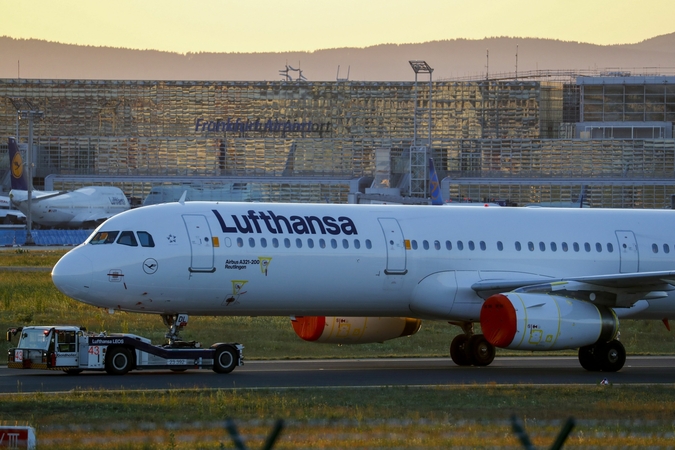 A Deutsche Lufthansa AG passenger aircraft is towed at Frankfurt Airport, Germany, on Thursday, May 28, 2020. MUST CREDIT: Bloomberg photo by Alex Kraus

The European Union's antitrust chief hit back at claims she's being too tough over Lufthansa's German bailout, insisting strict conditions are vital to preserve competition when the covid-19 pandemic abates.

Rejecting criticisms from Lufthansa's supervisory board over the proposed 9 billion-euro ($10 billion) rescue of Europe's largest airline, Margrethe Vestager said Friday she isn't "creating extra hurdles" by requiring cutbacks when the state takes a stake in companies.

"Lufthansa is indeed a very impressive company and they have market power," Vestager told reporters at a Brussels press conference. "There is a high risk that if you hold market power" that "competition will be disturbed," especially when state recapitalizations strengthen a company.

The supervisory board said May 27 that it was concerned about the weakening of its hubs at Frankfurt and Munich airports after the EU asked it to cede airport slots to rivals. That effectively shut down progress on a bailout package the company agreed on with Berlin earlier this week by delaying indefinitely a shareholder meeting scheduled to approve it.

Airport slots that determine when airlines can fly routes from airports are "a very valuable resource" and "often become the center of the debate because in order to fly to to an airport you need two slots," Vestager said. Competitors "need to have slots in an airport."

Vestager's comments come as Lufthansa's labor unions urged her in a letter not to push for measures that would dent the company's competitiveness and lead to job losses. Representatives of Lufthansa's cabin crew, ground staff and pilots unions said surrendering slots to airlines that didn't offer the same level of pay and conditions as the German airline would be unfair.

Lufthansa labor representatives control half the voting rights on the airline group's supervisory board, a body that still needs to vote on the deal in the days ahead. While the deal wasn't voted on at the last meeting, passing the package would be difficult without labor union support.

"Neither workers or other European citizens will understand if tens of thousands of jobs are lost, not to covid-19, but due to terms set by the European Union," the employee representatives said in the letter.

EU regulators are under strain to police huge subsidies governments are showering on companies to help them survive the coronavirus crisis. Germany's aid to business far outweighs any other EU country, leading to fears German companies will survive the crisis while others founder.

A Lufthansa spokesman declined to comment on Vestager's press conference.

"Just the fact that you have the state on board as a shareholder may also trigger more trust in your viability," she said. "And in particular, if you are a company with market power and the recap is more than 250 million euros." She said there is "such a big risk" to competition "that you will have to remedy this."

She said getting an agreement "is high priority" and that officials "are in in very close contact" with the German authorities. "I can tell you that, but I can not tell you when we will be done."

The German government is holding "intense talks" with the EU on the aid package which "meets the needs of the company as much as those of taxpayers, and the employees of Lufthansa who depend on the continuation of a strong business," government spokesman Steffen Seibert said at a press conference in Berlin.