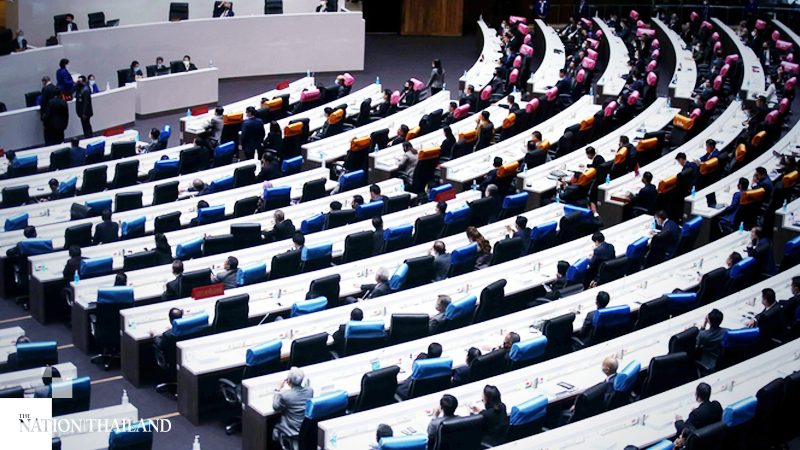 The lower house of Parliament on Sunday (May 31) votes to approve key emergency decrees providing financial support to business and people hit by the Covid-19 fallout. Photo: Tanachai Pramarnpanich/NationPhoto.

The Covid-19 financial aid package sailed through the House of Representatives on Sunday but opposition MPs attacked the Bt1.9-trillion aid as mostly benefiting big businesses.

After five days of debate, the lower house voted in favour of the Bt1.9-trillion package proposed by the government by issuing three related emergency decrees.

MPs voted 274 in favour of the first decree enabling the Finance Ministry to borrow Bt1 trillion in order to provide support to people adversely affected by the virus outbreak, while 204 MPs abstained.

The second emergency decree, authorising the Bank of Thailand to provide Bt500 billion soft loans to support small and medium enterprises (SMEs) hit by the Covid-19 fallout, sailed through with 275 voting in favour and 205 abstaining.

The third emergency decree to support bond market liquidity via the Corporate Bond Stabilisation Fund (BSF), established by the Finance Ministry and the Bank of Thailand, prevailed with the backing of 274 MPs and 195 abstaining. There were 487 MPs in attendance for the voting session -- 276 from the coalition government and 211 from the opposition.

He also criticised the Bt500-billion soft loans available to support SMEs as too small, or only 10 per cent of the total SME market lending of Bt5 trillion.

Meanwhile, Wanvipa Maison, another Move Forward Party MP, questioned the governance of the BSF saying it was likely to benefit large corporations.

She suggested that some conditions to protect labour be added: the companies eligible for fund support must not lay off workers. They must have no record of abuse of labour rights. In case they have a current legal dispute with labourers, they should drop the case. In the future, if they abused labour rights, they must be forced to buy back corporate bonds from the fund. She also lamented that while businesses get financial support quickly, people have to wait longer for assistance.