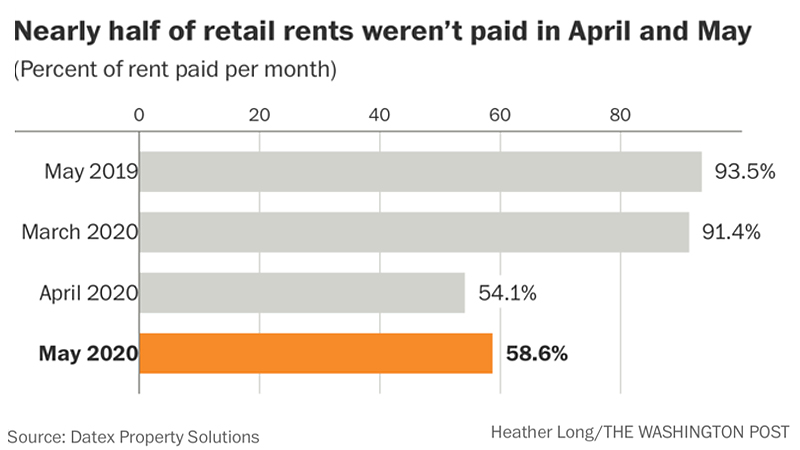 Nearly half of commercial retail rents were not paid in May, as companies as big as Starbucks say the financial devastation from the shutdown has left them unable to pay their full property bills on time. Some companies warn they will not be able to pay rent for months.

The problem for the broader U.S. economy is that when businesses like Ross Stores and T.J. Maxx stop paying rent, it sets off an alarming chain reaction. Landlords are now at risk of bankruptcy, too. Commercial real estate prices are falling. Jobs at property management companies and landscapers face cuts. Banks and private investors are unwilling to lend to most commercial real estate projects anymore, and cash-strapped city and local governments are realizing the property taxes they usually rely on from business properties are unlikely to be paid this summer and fall.

The situation is especially dire for owners of hotels and malls. Such retailers as Bed Bath & Beyond, Famous Footwear, H&M, and the Gap, movie theaters AMC and Regal and gyms like 24 Hour Fitness stopped paying rent entirely in May, according to Datex Property Solutions. Starbucks paid May rent but also sent a letter to landlords requesting landlords to make concessions starting June 1 and continuing for 12 months. Overall, Datex found that 58.6% of retail rents were paid in May. Office and warehouse tenants are still paying rent for now, but there remain concerns about whether tenants will renew leases as working from home gains in popularity.

"Social distancing means financial Armageddon for commercial real estate and municipalities in coming months," warned R. Christopher Whalen, head of Whalen Global Advisors, on his blog for investors. He predicted defaults could be worse than the peak losses of the early 1990s commercial real estate bust "by a wide margin."

The crisis is particularly threatening for tens of thousands of small businesses, some of whom operate on such small margins that they say they won't survive the pandemic recession if they have to pay rent right now. Many small companies are asking landlords for a break, but commercial properties often have a complex chain of owners. Getting them all to agree quickly is proving difficult.

Will Eastman has a lot of nightmares lately that he's going to be the owner who closes down the iconic U Street Music Hall forever. Eastman said he has tried everything to save the independent music venue and club in Washington, D.C., but it's hard to generate revenue when U Street Music Hall has been shut since March 13 and doesn't expect to host live shows until the fall, at the earliest.

"Right now my biggest challenge is with rent. We have had a back-and-forth with our landlord that is kind of mind-boggling," said Eastman, who hasn't paid April, May or June rent. "We have no shows scheduled for summer."

Eastman is in talks with his landlord, but finding a solution has been difficult. Real estate experts say at least U Street Music Hall knew who to pick up the phone and call because his landlord and the property's mortgage holder are nearby in the D.C. area. For many other businesses, the ownership of their property is far more complex.

"It's not just the landlord and the tenant that have to talk. Many properties are owned by a number of investors," said David Ling, a real estate professor at University of Florida. "A lot of this is going to have to be sorted out via lawsuits and the courts."

Fewer than 40% of commercial property loans are owned by banks, according to the Mortgage Brokers Association. The rest are in the hands of various life insurers, real estate investment trusts (REITs) and investors in commercial mortgage-backed securities, which is known as CMBS.

Dozens and sometimes hundreds of commercial mortgages are packaged together into CMBS, which are typically purchased by a bunch of investors. This complex structure is supposed to spread out the risks and rewards, but it adds multiple layers of ownership to properties.

The commercial real estate market ballooned in the past decade to $20 trillion, as investors hunted for high, yet seemingly safe, returns.

"This really is a tale of who is your lender?" said Andrew Little, a partner at real estate investment bank John B. Levy & Co. in Virginia. "If you have a bank lender or an insurance company lender, you can probably get through this and hopefully get to a point where things start bouncing back. If your lender is a Wall Street CMBS lender, you are in trouble."

Typically, when businesses stop paying their rents and the building is ultimately owned by the investors of CMBS, the tenants have to call a management company known as the special servicer. Already, $32 billion in CMBS loans have gone to special servicers, according to Moody's, and almost all have been hotel and retail properties. These servicing firms have little incentive to give tenants a break, Little says, because they make money by tacking on extra fees and penalties.

What this all means is that hotel and retail properties are under severe strain to pay the rent and could collapse in a wave of defaults and foreclosures, warn real estate experts. Already, big investment firms are preparing to scoop up cheap properties. Blackstone and Oaktree have raised massive funds to plunge into the distressed commercial market, much as they did with residential homes after the Great Recession.

Some landlords are asking local governments to delay property tax collections, but many municipalities are already financially strained as tax proceeds plunge and costs skyrocket during the pandemic.

Small-business advocates are pushing Congress to change the rules on Paycheck Protection Program loan forgiveness qualifications, so more than 25% of the money can be used for rent and other overhead costs. A House bill that passed last week would allow up to 40% of the money to go toward rent, but the Senate has not agreed to the changes yet.

Washington passed emergency legislation in May requiring commercial retail landlords to agree to rent payment plans. California is debating an even more aggressive proposal to force landlords with tenants that have been severely affected by coronavirus closures to renegotiate leases. Landlords say this upends the very basis of contract law.

"It's not appropriate policy to have blanket rent forgiveness. It could really create some chaos," said John Worth, executive vice president for research at the National Association of Real Estate Investment Trusts.

Lawmakers behind these initiatives say the goal here is to avoid a massive loss of small businesses.

"Businesses and individuals are hurting because of this crisis and it is no one's fault. We're trying to make sure people can survive," said D.C. Council member Mary M. Cheh (D-Ward 3), who sponsored the emergency legislation. "In the end, the rents will be paid."

Perhaps the most effective intervention so far has come from the Federal Reserve, which has purchased about $9 billion of CMBS and told banks they won't be penalized for making reasonable concessions on loans. The Fed's actions have helped unfreeze the commercial real estate market for investors, although it has done little to help small businesses unable to pay rent.

For U Street Music Hall in Washington, paying the rent looms large. The venue has sold more than a thousand T-shirts to fans to make money during the pandemic. An online donation campaign to help U Street workers has raised over $20,000, and Eastman managed to get $120,000 from the federal government's Paycheck Protection Program for small businesses. But to have this loan forgiven, he has to use $90,000 of the funds to pay his workers.

The remaining funds can be used to pay rent and other expenses, but there's barely enough leftover to cover the $21,000 rent each month. Eastman has not paid April or May rent and doesn't expect to pay June, either. He recently asked his landlord for a payment plan.

U Street Music Hall's landlord is Hanny Chan, owner of JRC Standard Properties, a small commercial real estate company in Washington. Despite the pandemic, Chan still has to pay the mortgage, taxes, insurance, utilities and trash collection for the property where U Street Music Hall is located. His bills have not stopped, either.

Chan spoke with his lender, Industrial Bank, about relief on the mortgage, but Chan found the terms were too onerous, according to his lawyer.

JRC, as the landlord of music hall, "has not received any mortgage relief from its lender. After the public health emergency was declared and U Street Music Hall was shuttered, it withheld rent for April and May without any request for any rent relief," said Ian Thomas, a lawyer at Offit Kurman who represents JRC. He said JRC has asked U Street Music Hall for more detailed financial information, including about its PPP loan, but the documents were not provided.

Industrial Bank prides itself on serving the D.C. community, said chief executive B. Doyle Mitchell Jr. He said the bank has provided "probably 30%" of its commercial real estate clients with some sort of workout plan.

"We have come to the aid of our customers and some non-customers quickly during this pandemic time," Mitchell Jr. said. "Some borrowers looked at the [forbearance] program and decided they did not need it. All of our borrowers know it's available."

Chan and Eastman are headed to court to work it out. Their situation is further complicated by the fact Eastman and Chan have been in a legal dispute for the past year over management fees and the lease extension.

For now, U Street Music Hall's full rent is still due.