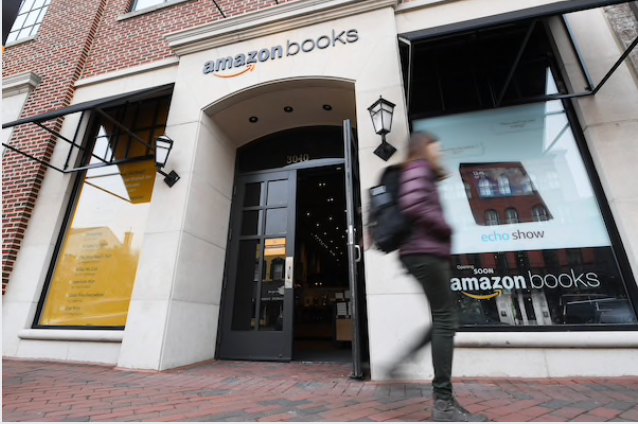 SEATTLE - Amazon on Thursday backed away from a decision to block the sale of a self-published e-book about the coronavirus after critics, including Tesla chief executive Elon Musk, criticized the ban.

On Thursday morning, Alex Berenson, a conservative-media favorite, tweeted to his more than 118,000 followers that Amazon banned his 6,400-word booklet. The booklet, "Unreported Truths about COVID-19 and Lockdowns: Part 1: Introduction and Death Counts and Estimates," argues that the mainstream media is overstating the threat from the virus. Berenson dubbed them "Team Apocalypse."

The tweet ricocheted around social media, retweeted more than 8,000 times. Musk retweeted it with a comment to his 35.6 million followers, calling the decision "insane." He directed his comments to Amazon chief executive Jeff Bezos, who owns The Washington Post.

"Time to break up Amazon. Monopolies are wrong!" Musk added.

Within a few hours, Amazon reversed itself, sending Berenson an email that it would publish the book after all. Amazon spokeswoman Sarah Elison said the book was removed in error. Initially, the company implied in an email to Berenson the decision related to concerns about coronavirus misinformation.

"Due to the rapidly changing nature of information around the COVID-19 virus, we are referring customers to official sources for health information about the virus. Please consider removing references to COVID-19 for this book," Amazon digital publishing unit wrote.

The book criticizes decisions by politicians to shut down the economy, as well as the media coverage of those moves. Berenson writes that a new goal of reducing coronavirus deaths at any cost has taken root "as if deaths from COVID are the only kind of deaths or societal damage that matter."

The spread of the novel coronavirus, which causes the disease covid-19, has slowed in recent days.

After Amazon decided to block the sales of the book, Berenson contemplated making "Unreported Truths" available on his website, he said. He is also in the process of creating an Apple publishing account to sell books in its e-book store. But he said Amazon's initial decision would have eliminated a massive market for the booklet.

"Amazon dominates both the electronic and physical book markets, and if it denies its readers a chance to see my work, I will lose the chance to reach the people who most need to learn the truth - those who don't already know it," Berenson wrote in an emailed statement.

Berenson is not a scientist or a doctor. His primary credential is that he is a former New York Times reporter who worked for the publication from 1999 to 2010.

In February, Amazon began removing listings for products that made dubious claims about the novel coronavirus, stopping the sale of cleaning products that claimed to "kill" the virus. In March, the company took down pages offering digital books about the disease for sale, including one that trafficked in the conspiracy theory that the virus was human-made, according to a Wired article.

Decisions about publishing opinions with regard to the virus push Amazon into the culture wars that have recently roiled other tech giants such as Twitter, Facebook and Google. Last week, Twitter attached a fact-check label to tweets from President Donald Trump that falsely claimed that mail-in ballots are fraudulent. Facebook chief executive Mark Zuckerberg, meanwhile, defended his company's decision to take no action on a Trump post regarding protests in Minneapolis last week that said "when the looting starts, shooting starts."

In its original note to Berenson, Amazon cited its content policy. Those guidelines, listed on Amazon's website, are broad. The company says it provides "our customers with access to a variety of viewpoints, including books that some customers may find objectionable." But the company also notes that it reserves the right "to determine whether content provides a poor customer experience and remove that content from sale."

There's little doubt that some find Berenson's work objectionable. Epidemiologists and other health-care professionals have challenged some of Berenson's analysis made via his website, Twitter and on Fox News programs, particularly his criticism of coronavirus modeling and his claims that the U.S. health-care system is not under strain. Scientists also criticized his 2019 book, "Tell Your Children: The Truth About Marijuana, Mental Illness, and Violence," for exaggerating research that pot increases the risk of schizophrenia and other psychoses.