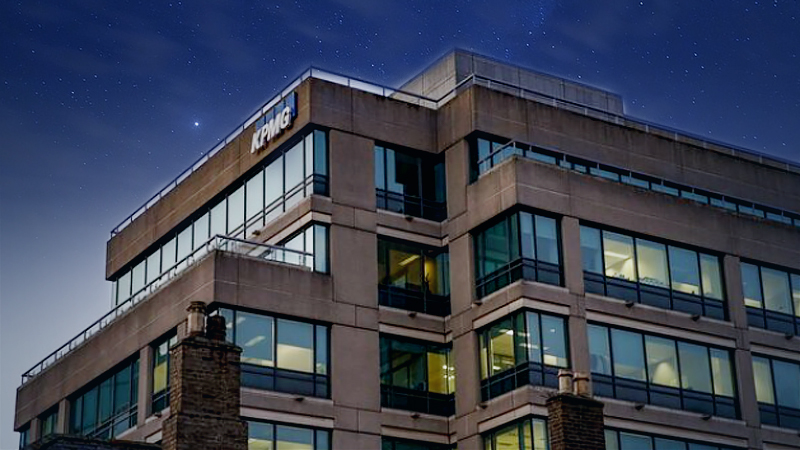 The offices of KPMG Europe at Harbourmaster Place in Dublin, Ireland, on Jan. 6, 2020. MUST CREDIT: Bloomberg photo by Hollie Adams.

Dressed in green vests and with new safety rules to comply with, workers raced to complete developments earmarked for Alphabet Inc.'s Google, just days after a navy coronavirus testing ship nearby left.

Construction resumed even as the virus throws up a new challenge for the wider Irish model: how does an economy almost uniquely dependent on U.S. firms cope with a brake on global investment? Companies like Twitter, Google and Pfizer helped revive the country after the nation's real estate bust, while overseas cash poured in to help build the offices and apartments which host the firms and their workers.

The flow of that money into Ireland is slowing, according to Rick Larkin, director of construction company Twinlite, which has built around 3,000 homes and has another 1,200 in the pipeline.

"The big worry is around financing," said Larkin. "While banks here have been doing some, limited, lending for construction, it's mostly been U.S. financiers and hedge funds. As their funding dries up, funding in Ireland dries up. What happens in New York and elsewhere feeds through to Dublin."

Ireland is one of the most open countries in the world in economic terms, according to the KOF Globalisation Index, having built its economic strategy on a low corporate tax rate and a plentiful supply of well-educated, English-speaking workers.

The U.S. has a deficit in its goods trade with Ireland of about $19.6 billion so far this year, outstripped only by its deficits with China and Mexico, figures released on Thursday showed. Ireland's economy grew 1.2% for the first quarter of 2020, in part boosted by exports, the nation's statistics agency said on Friday.

Acting as a bridge between the U.S. and Europe, Ireland won the most foreign investment projects in Europe on a per capita basis in 2019, advisory firm EY said last week.

Dublin's office vacancy rate has dropped to about 5%, and U.S. firms now employ directly or indirectly about one in five workers in Ireland. Google, Facebook and Twitter have more than 12,000 workers in the city between them.

Now, with most employees working remotely, their offices lie virtually empty. Ireland is facing the worst recession in its history, according to the Economic Social and Research Institute, outstripping even the 2008 crisis, when a real estate crash almost bankrupted the nation.

"People froze and went in war mode" once the lockdown hit, said Kevin Nowlan, chief executive of Hibernia REIT, whose clients including Twitter. "Everything went into pause."

Ultimately, Nowlan says, workers will push to return to offices, and CBRE Group Inc. has forecast a revival in the market in the second half of the year.

"In the long term, full-time home working just isn't an option for most people," said Nowlan. "We like change, we like variety, we want some fun, especially the younger, more dynamic crew."

The IDA, responsible for attracting companies to Ireland, expects new investment in 2020 and 2021 to be hurt, but says the economy has previously proved its resilience in bouncing back.

Marlet Property Group, which is completing a development close to the River Liffey partly earmarked for Google, said its project is proceeding as planned. At least 80% of Irish foreign investment projects are expected to be maintained, according to EY.

Yet, although the virus is the immediate threat, Ireland also faces longer-term challenges. President Donald Trump has vowed to bring drug firms back to the U.S from countries such as Ireland, while changes to international tax law may hurt tech companies based there.

And in a covid-19 era, winning new investment might prove tricky. For now, that's almost impossible: even if a U.S. executive is able to travel, quarantine requirements means a two-day trip to scout a site could take weeks.

Meanwhile, offices continue to go up. About 340,000 square meters (3.7 million square feet) of new offices are expected to completed in Dublin between 2020 and 2021, according to broker CBRE. About 45% has been pre-let, while some of the rest is under negotiation, Marie Hunt, executive director for research at CBRE's Irish arm, said.

Some are taking an imaginative approach, with Twinlite's new development including apartments with home offices attached.

"We are lucky in that we have secured financing on our new projects, but it's going to be more difficult and expensive," said Rick Larkin.

"I wouldn't want to be building offices now. Will demand evaporate for rental properties? No, I don't believe it will," he said. "But maybe we'll will have to charge a little bit less."