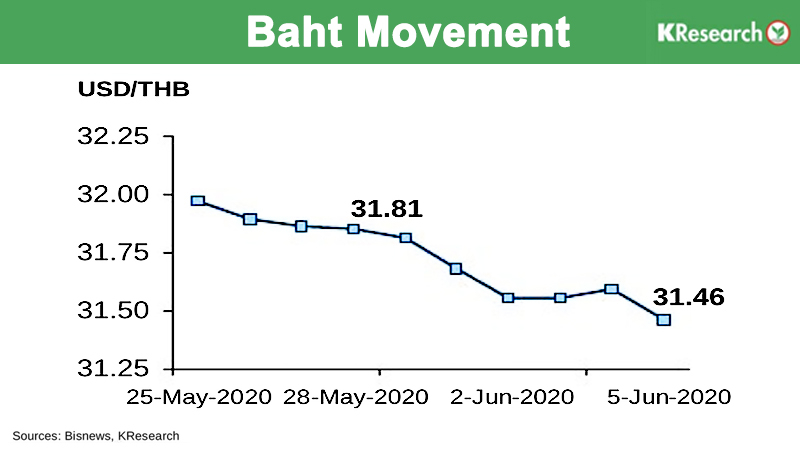 The baht has been highly volatile over the first two quarters of this year, weakening about 10 per cent against the US dollar in the first quarter, moving from about Bt30 to the dollar to about Bt32.7. However, over the past two months, it has risen by about 5 per cent, staying at about Bt31.3 against the dollar.

Sunthorn Thongthip, a senior director at Kasikorn Securities, said the US currency has been the weakest in three months. Economic recovery has led to large investments in risk assets, while the unrest in the US has also contributed to the weakening of the dollar. Populist policies that have led to a budget deficit of $4 trillion – an all-time high – has also weakened the currency.

Now, however, with the Covid-19 pandemic hitting a decline, many countries are reopening their businesses, which is starting to benefit Thai exports. Also, he said, Thailand’s economy is showing signs of improvement, which is strengthening the baht.

A stronger baht will benefit energy, electricity and airline companies, but the losers will be the electronics and food sectors.

Energy and electricity firms have higher dollar debts, hence every time there is a Bt1 rise against the dollar, their profits will be boosted by 2 to 15 per cent. Airlines will also save on fuel costs when the baht rises, so their profits could jump between 80 and 100 per cent.

Electronics and food companies, however, largely earn in dollars, so when there is a Bt1 rise, their profits will be pulled down by 7 to 18 per cent.

However, the Banpu Public Company is different from other energy firms because it holds a large amount of dollar assets, while its debts are in the Thai currency. Hence, every Bt1 rise in the currency will bring its profit down by 62 per cent this year. The company did, however, make exchange rate gains in the first quarter when the baht was weak, he said.

Asia Plus Securities believes the baht will not appreciate as much as it did last year, rising from Bt33 on December 15, 2018, to Bt29.68 on December 31, 2019. Thailand this year will have a smaller account surplus due to a slowdown in exports and drop in tourist arrivals due to the fallout of the coronavirus pandemic. It said the tourism sector may only recover at the end of the year.