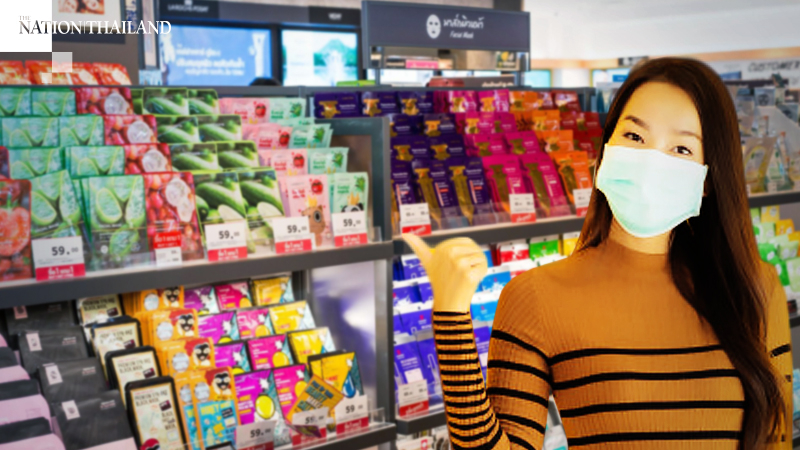 The coronavirus crisis has upended just about every part of daily life. Tens of millions of Americans are out of work, and a deepening recession has forced many people to rethink their spending. Retailers - already saddled with a glut of unsold winter and spring merchandise - are scrambling to get a handle on these new habits and what is projected to be a long-term shift in the types of clothing, shoes and accessories people will be willing to buy.

"The longer we stay in this pandemic, the more our relationship with fashion will evolve," said Dawnn Karen, a fashion psychologist and branding consultant.

Here are five changes in the fashion and beauty industries already taking hold:

- Hello, false lashes. Sales of eye makeup are on the rise as Americans look for ways to express themselves behind face masks while staying six feet apart.

Leading the charge: False eyelashes, which averaged 15% increases in week-over-week sales in May as businesses in many parts of the country began to reopen, according to market research firm NPD Group. Mascara sales, meanwhile, grew 11% in the same period, while demand for eyebrow products jumped 5 percent.

"It makes complete sense," said Larissa Jensen, a beauty analyst for NPD. "When you have to go out and you're wearing a protective face mask, those are the products that emphasize your 'smize' - your smiling eyes."

Sales of lip products, meanwhile, fell 5 percent in May. After all, Jensen said, nobody wants lipstick smudges inside their masks.

Makeup sales picked up last month after about two months of declines, when much of the country was hunkered down at home. During that period, Jensen says, many Americans shifted away from cosmetics to skin care products such as face scrubs and body creams, which are still performing well. Sales of high-end soaps, home scents and hair color also have risen in recent months, she said.

"One of the first things we've seen in the pandemic is a shift to skin care," Jensen said. "During a time when most of the country was on lockdown, everyone's concern was on meeting their basic needs."

Sales of high heels, loafers and other dress shoes have been tumbling for years, and analysts say the pandemic has turbocharged their demise. Sales of men's and women's dress shoes plunged 70 percent in March and April, according to NPD.

"High heels are way down," said Beth Goldstein, a footwear analyst for NPD. "The question now is whether they'll ever rebound. Of course, some women out there are dying to put their heels back on. But I think most of them are saying, 'I'm never going to wear those shoes again.' "

Lately, she says, it's all about comfort: Slipper sales doubled in April, as Americans splurged on higher-priced options such as fur-lined Ugg products. Crocs, known for their homely but comfortable signature foam clog, also have been "super hot," she said.

That trend is likely to continue even as Americans return to work. Shoe manufacturers, she said, are busy creating designs with wider and thicker heels, padded insoles and other athletic touches to add stability and comfort. Sales of stiletto-shaped heels, she said, dropped 11 percent last year.

"Retailers are recognizing that they're going to have to rethink what they know about work and fashion," Goldstein said. "There is going to be a long-term shift."

- A return to basics. Malls are reopening, but don't expect to see racks filled with seasonal trends. With money tighter, retailers and consumers are loading up on evergreen basics and neutrals.

"The biggest upcoming change is going to be the propensity toward value," said Marshal Cohen, a retail analyst for NPD. "As we come off the stimulus check, the consumer is not going to feel so rich anymore, which means a lot fewer impulse purchases."

That has led many retailers to stock up on items such as plain T-shirts, classic-cut jeans, and beige and khaki pieces that won't fall out of favor if they don't sell right away.

"What we're looking for today are core basics," Morris Goldfarb, chief executive of G-III Apparel Group, which owns a number of brands including DKNY and Bass, said on an earnings call this month. "Fashion is not as important this year."

Jeans, joggers and leggings have become among the biggest sellers at American Eagle. Meanwhile, online lingerie brand ThirdLove is focusing on neutrals and basics while pushing off trendier items, such as lace bras or seasonal colors, to next year, according to co-founder Heidi Zak.

"It's virtually impossible to forecast right now," she said.

- Shorter hemlines. According to common lore - and the century-old Hemline Index - skirts and dresses get longer as the economy worsens.

But this time, analysts say, fashion is heading in the opposite direction, away from maxi dresses and floor-sweeping skirts.

"Hemlines were inching shorter anyway," said Cohen of NPD. "Do I expect them to get even shorter? I do."

The shift, he said, is less about fashion trends and more about retailers' desperation. "When business gets bad, you need to make a bold statement to get people to buy something new," he said. And if shoppers already have closets filled with ankle-length styles, that means enticing them with above-the-knee fashion.

- Even more casual wear. Corporate America has been retreating from blazers and ties for years, and analysts expect to see more athletic wear and casual attire at the office even after the pandemic is over.

When Americans do head back to the office, they're likely to trade in business casual for "Silicon Valley chic," said Karen, the fashion psychologist. Think hoodies paired with blazers, and sweatpants with silky tops.

"There will be much more mixing and matching between dressing up and dressing down," she said. "And it'll be okay to wear the same thing over and over again. The pressure is off."