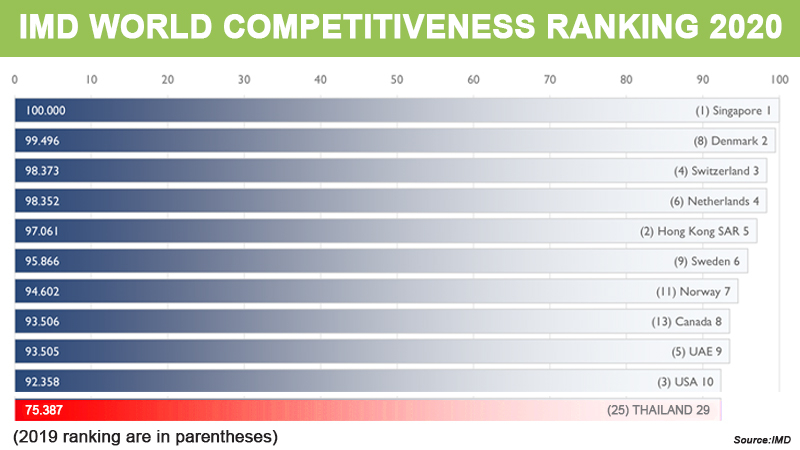 Poor economic performance and an inefficient government has brought Thailand’s global competitiveness ranking down by four places this year. Thailand now stands 29 out of 63 economies, down from last year’s ranking of 25, according to the IMD World Competitiveness Ranking 2020 hosted by Switzerland-based International Institute for Management Development.

The Kingdom’s ranking in competitiveness had been further weighed down by its economic performance, which fell six places and government efficiency, which dropped three slots.

“Thailand’s place in the list has been affected by a sluggish economy, no longer being attractive to foreign investor and concerns about labour shortage in the long run,” said Teeranun Srihong, chairman Thailand Management Association (TMA).

“Another key factor is poor government efficiency, taking into account a weakening rule of law, poorly run key national institutions and a deterioration of financial stability.”

However, the country did better in business efficiency and showed slight improvement in infrastructure development.

“Thailand’s overall of competitiveness scores, however, remain low as it has many challenges to overcome such as education, public health, environment as well as science and technology infrastructure,” Teeranun said.

“Thailand’s ranking was up five places last year, but down four places this year, suggesting that the country’s ability to efficiently respond to fast-changing environments remains the biggest challenge in the long run,” he added.

The top three countries in this year’s competitiveness ranking are Singapore, Denmark and Switzerland in that order.