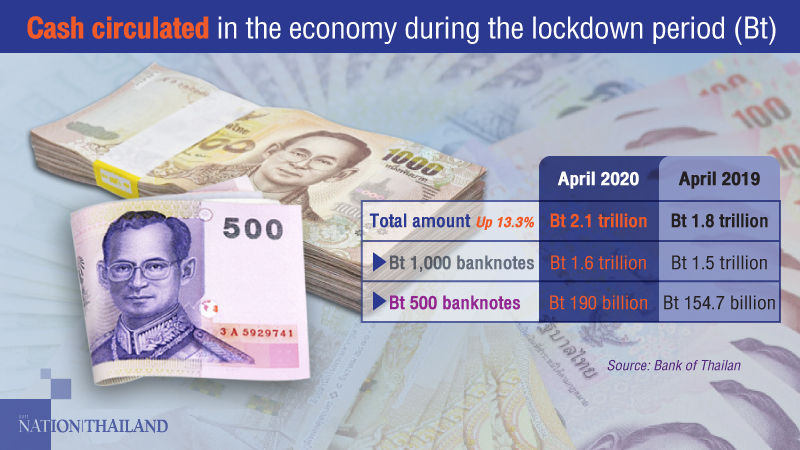 The amount of cash circulated in the economy was far higher than expected during the height of Covid-19 outbreak because many consumers had a lot of cash in hand due to the unpredictable situation wrought by the virus and lockdown restrictions.

Cash circulation in April surged to an all-time high at Bt2.1 trillion or up 13.3 per cent, even though conditions were tough in March and April as the government told businesses to stop operating temporarily and closed the country to foreigners.

Somboon Chitphentom, the Bank of Thailand’s assistant governor, said people withdrew large amounts of money in April as the crisis hit acute levels and the government put the country under state of emergency. Many venues were closed, and Thailand’s borders were sealed off.

These factors created uncertainty, leading consumers to hold more cash, he noted. They began withdrawing large amounts in the last week of March and continued to do so until mid-April, he said.

The government’s financial aid for affected people also contributed an increase in the circulation of cash in the economy, as the first batch of cash was distributed in April, leading to Bt64.5 billion being withdrawn from banks.

Now that the government has lifted most lockdown restrictions, the withdrawal of cash has returned to normal, Somboon said.

He also believes that people will use more digital money in the post-Covid new normal, especially since online transactions have become so easy and more widespread.