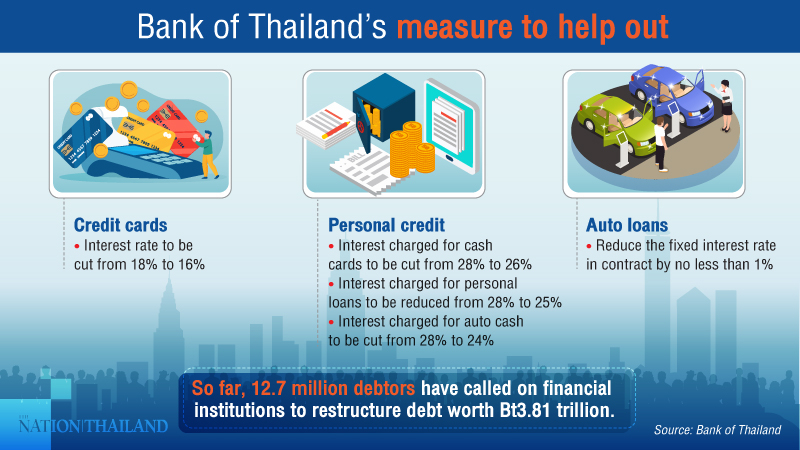 The profits of commercial banks and non-banking entities may be under pressure now that the Bank of Thailand (BOT) has issued measures to help debtors.

The central bank recently ordered them to cut down the interest rates they charge for credit cards, personal credit and hire purchase by 2 to 4 per cent in a bid to help people struggling with debt due to the Covid-19 crisis.

Anekpong Putthapiban, assistant director at Asia Plus Securities, said BOT’s move may have an adverse impact on commercial banks’ net interest margin due to the decline in real interest rate depending on the number of debtors participating in these measures.

"For every 0.10 per cent drop in net interest margin, banks’ profit forecast this year will decrease by about 5 per cent,” he said.

He also said that for every 1 per cent interest rate cut by leasing companies, such as Aeon Thana Sinsap (AEONTS), Srisawad Corporation (SAWAD) and Muangthai Capital (MTC), their net profit forecast this year will drop by 3 to 9 per cent.

He advised investors to avoid investing in leasing companies, because most leasing firms’ stock prices rose to its base value and received a negative factor from BOT's interest rate control measures.

Meanwhile, a stock analyst at Yuanta Securities said BOT's measures will affect the profit earned from credit-card interest the most.

"Therefore, we expect Krungthai Card and AEONTS's profit forecast this year to drop by 4.1 per cent and 2.1 per cent respectively," the analyst said.