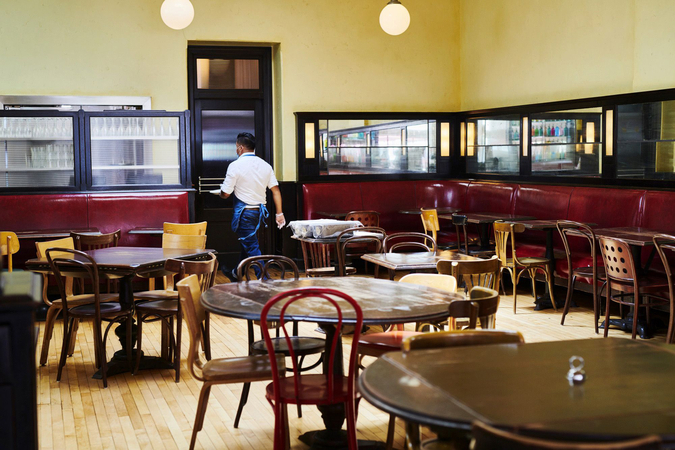 A worker walks past empty tables inside a restaurant in Montclair, N..J., on June 15, 2020. MUST CREDIT: Bloomberg photo by Gabby Jones.

Applications for unemployment benefits in the U.S. fell less than forecast last week, showing only gradual improvement from the worst of the pandemic-related layoffs even as states re-open more of their economies.

Initial jobless claims for regular state programs totaled 1.51 million in the week ended June 13, down slightly from an upwardly revised 1.57 million in the prior period, Labor Department figures showed Thursday. The 58,000 weekly drop was the smallest since claims began to retreat in early April.

Continuing claims -- the total number of Americans claiming ongoing unemployment benefits in state programs -- decreased to 20.5 million in the week ended June 6, compared with a median projection of 19.9 million. Those figures are reported with a one-week lag.

"The employment data are very unconvincing, it's one of the things causing the markets to stall," said Aneta Markowska, chief financial economist at Jefferies. "Without employment starting to cooperate or participate in the recovery, you're not able to sustain the consumer spending which helps drive the market."

A separate report Thursday showed manufacturing in the Philadelphia region unexpectedly expanded in June. The Federal Reserve Bank of Philadelphia's index of general business activity soared to 27.5 from minus 43.1 a month earlier as orders and sales picked up. The 70.6-point swing was the largest in records back to 1968.

By several metrics, the economy has rebounded at a faster pace than many anticipated. Payrolls at companies increased by several million in May and consumer spending on cars, restaurant meals and more soared last month, exceeding expectations as states loosened restrictions. But the jobless claims data remain a glaring blemish that shows churn and volatility in a labor market that entered the year in solid shape.

The number of Americans applying for jobless benefits exceeded the 1.29 million median estimate in a Bloomberg survey of economists for the latest week, which coincides with the survey period for the monthly employment report.

The labor market recovery "is going to be a long recovery, and today was a reminder that it's not going to improve every week in a straight line," said Brett Ryan, senior U.S. economist at Deutsche Bank Securities. He added that the data suggest the June employment report, out early next month, may not be as positive as forecasters would have expected.

Fed Chair Jerome Powell underscored this dichotomy to lawmakers Tuesday when he said, "We would expect to see large numbers of people during this period coming back to work during this second period -- call it the bounce back or the beginning of the recovery," Powell said. "Then we think, and I think most if not all forecasters think, that will leave us well short of where we were in February."

Given the unprecedented surge of claims in recent months, many economists look to the non-seasonally adjusted figures for a more accurate read on claims. Unadjusted continuing claims actually climbed by almost 26,000 to 18.7 million, boosted by an almost quarter-million jump in California from the previous week. Unadjusted initial claims dropped by more than 128,000 last week.

In addition to California, unadjusted continuing claims rose almost 110,000 in Texas and Oregon saw a more than 144,000 jump.

In the week ended June 13, states reported 760,526 initial claims for Pandemic Unemployment Assistance, the federal program that extends unemployment benefits to those not typically eligible like the self-employed. The total number of unadjusted continuing claims in all programs edged lower to 29.2 million in the week ended May 30.