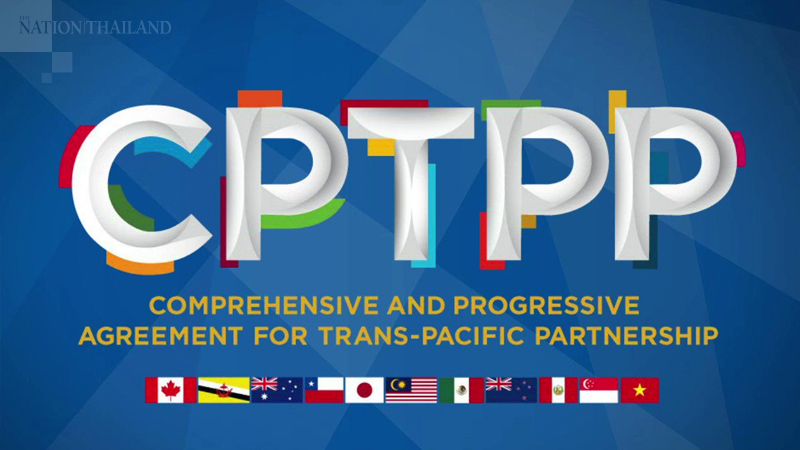 More than half a decade after abandoning the US-led multilateral programme, Trans-Pacific Partnership (TPP), Thailand has finally got back on track to joining the grouping again.

On the initiative of Deputy Prime Minister Somkid Jatusripitak, Thailand began the negotiations in early 2020. The new TPP, however, was remodelled as the Comprehensive and Progressive Agreement on Trans-Pacific Partnership (CPTPP) spearheaded by US  ally, Japan, in March 2018.

The hope is that it might offer Thailand a broader economic and strategic opportunity, and most importantly grant Bangkok an ability to compete with its rising neighbours -- Malaysia and Vietnam -- who joined the talks in 2008 and 2010 respectively.

Unfortunately, the move by the Thai government has faced a chronic backlash from the public since the end of April 2020. Prominent civil-society groups interpret the CPTPP as benefiting only a small circle of Thai elites and their business conglomerates. But it grants almost zero benefits to those from the middle-class and the working class who form the majority of the country. Built on a hashtag campaign in early June, “#NoCPTPP”, on Twitter, the opposition has successfully managed to instill and flood various types of colourful infographic images into the hashtag, which has resulted in a large public disagreement on social media on joining the controversial trade deal for more than a week. This immediately led to Bangkok’s decision to stall the move and pass it to the legislative body in order to avoid popular protests.

The secret sauce to this success was undeniably simple. Thai civil-society groups used a down-to-earth strategy of making every information consumable. They converted all the scattered information about CPTPP into provocative, straightforward and reader-friendly messages, and spread them on social media platforms. When the messages are already over-simplified, it is a plain-sailing task for the groups to broaden their audiences across the board. Thus, the problem lies not with the audiences, but the messages themselves. The groups took advantage of their widespread trend of CPTPP and manipulated the public to rage on the issue, by emphasising only a few life-threatening agendas:  patents on plants and seeds, pharmaceutical patents, and small and medium-sized enterprises.

Though a handful of agendas could not fully represent the entire CPTPP package, it was more than enough for the civil-society groups to whip up  public opinion against the government as it was deemed that Thai society still remains largely dependent on the  agricultural and farming sector. Those agendas were cunningly made to be seen as jeopardising the old and prosperous livelihoods of all Thais. Hence, it was not too hard for the public to automatically believe in the civil-society groups’ provocative narrative. And, that is essentially where the information war began, and the government is likely to lose its ability to shape public opinion. Obviously, the government is not putting enough effort into advocating the trade deal.

The reasons why the government and its decision-making bodies appear to be non-responsive to the CPTPP issue remain unclear. Nevertheless, one thing that is utterly clear is that it did not effectively arrange a proper channel of communication to transparently persuade the public into trusting it. Therefore, it could not make the masses feel secure enough about its ambitious scheme. The Department of Trade Negotiations, and its parent organisation, the Ministry of Commerce, who have direct responsibility in dealing with the CPTPP issue, did not prove to be adequately proactive in communicating with the public.

A coalition of civil-society groups has its glowing infographic, leaflets spread throughout both Twitter and Facebook platforms in which most of them are online-based, by far the simplest approach to reaching its audiences. In contrast, the governmental bodies’ approach relies on limited channels of communication, paper-based leaflets, press conferences, press releases, official website-based reports, and information-overloaded conference papers. Such channels are seen either as too traditional or too informative which is not highly applicable for mass mobilisation and public support on social media.

To be fair, the government has its own social media channels too, but an old-fashioned method of communication with the public remains a major obstacle. The infographic pamphlets provided on their Facebook pages and official websites are often criticised as uninspiring, and unimaginative, since they roughly put all the information into the template at once. And that does not appear to be sufficiently persuasive. On the contrary, it drives the audiences away as the information published within the pamphlets is too incomprehensible and not reader-friendly. The masses definitely prefer messages that are easy to understand. The government has to basically understand that in order to better communicate with the public, it needs to consider the comprehension of its audiences. This is where the Thai civil-society holds its high ground over the government.

As a matter of fact, the government is strategically the sole actor who holds most of the information about the CPTPP. It had previously hired a consulting firm, Bolliger & Company, to conduct an intensive research about both costs and benefits of the CPTPP to the Thai nation.

Apart from a 500-page research report produced by the prestigious consulting powerhouse, the government, during the past years, also had obtained a wide-ranging view from several like-minded agencies. For example, public policy-oriented Thailand Research Development Institute (TDRI), the Thai Ministry of Foreign Affairs, the Thai Ministry of Agriculture and Cooperatives, Singapore-based ISEAS-Yusof Ishak Institute, as well as leading Thai university scholars.

The public policy community, stated above, had often organised straightforward  conferences, and published newspaper commentaries about the nationwide benefits and advantages of the CPTPP, in support of the government’s move. To this extent, it could be said that the government is absolutely holding a greater power of knowledge to shape public opinion, but it is signalling the failure to do so. It need not rely merely on an old-fashioned communication approach, and should make more attempts to educate the public about the issue. The inadequacy in public relations will certainly cost the government more of its future moves should it fail to demonstrate the brighter side of that troublesome trade deal. The government must soon readjust its domestic strategy in order to bridge the gap between itself and the public, or else all the endorsements from the policy community will be worthless