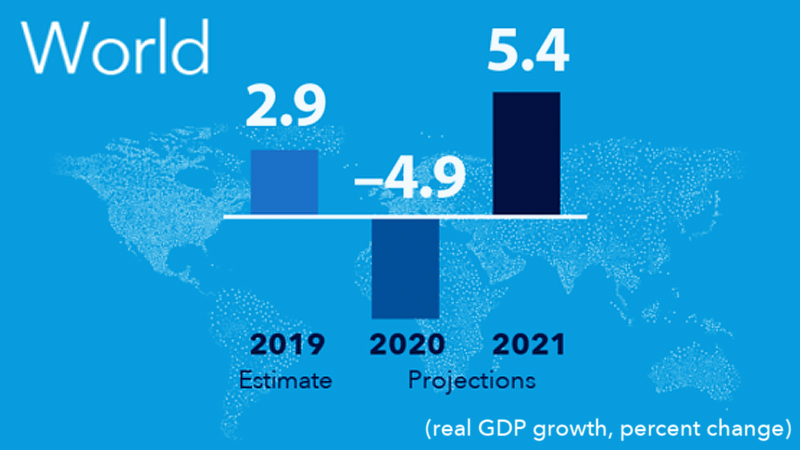 The International Monetary Fund on Wednesday painted a bleak portrait of the global economy, saying the coronavirus pandemic has caused more widespread damage than expected and will be followed by a sluggish recovery.

The global economy will shrink this year by 4.9%, worse than the 3% decline predicted in April, the IMF said. 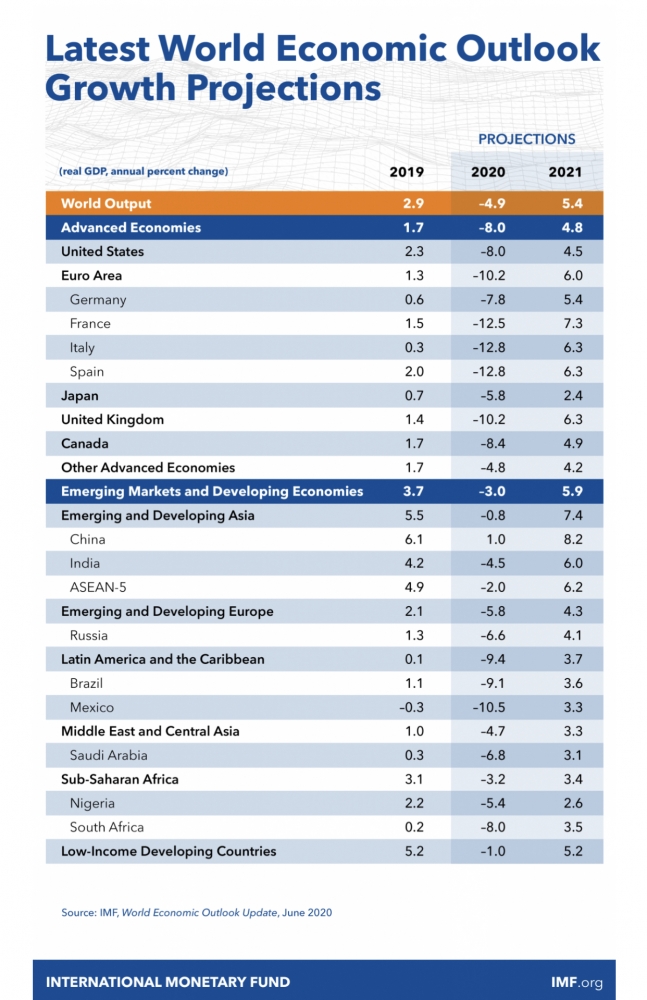 No major economy is escaping the pandemic. The U.S. economy, the world's largest, is expected to shrink this year by 8%. Countries that use the single European currency are headed for a decline of more than 10% while Japanese output will fall by 5.8%, the IMF said.

The Chinese economy, suffering the twin ravages of the pandemic and the trade war with the U.S, is projected to eke out just a 1% gain - its worst performance in several decades.

"Maybe we can say the world has bottomed out, for now, and we're in a recovery phase," said Gita Gopinath, the IMF's chief economist. "But still, the strength of the recovery is highly uncertain because there is no solution yet to the health crisis."

By the end of next year, the pandemic will have cost the global economy $12.5 trillion in lost output, she added.

Current conditions are considerably more dire than the "unprecedented decline in global activity" that the fund projected two months ago. Since mid-April, economic data suggest "even deeper downturns than previously projected," the fund said.

Fund officials blamed the darker forecast on the effects of social distancing; scarring to global production capacity from the lockdown of activity; and the productivity cost of new safety and hygiene rules. Some economies also are still struggling to control the coronavirus, the fund added without naming specific governments.

The forecast assumes countries will not reimpose comprehensive lockdowns even if the pandemic flares up again.

Government crisis-fighting efforts - including $11 trillion in spending and tax cuts - have kept the economic collapse from worsening, the fund said.

"Today's IMF report is a warning to the world about what will happen if policymakers take their foot off the gas," said John Lipsky, a former IMF senior adviser who is now with the Atlantic Council. ". . . The uncertain spread of the virus, risk of rising trade tensions, and debt vulnerabilities in emerging economies all lead to the same conclusion - we have not done enough."

Along with backing continued central bank support for low interest rates, the IMF is calling for wealthy nations to grant substantial debt relief to the world's poorest countries. Earlier this month, the fund approved its 70th request for emergency financial aid, a $148 million loan for Guinea.

The funds are intended to help Guinean officials pay for urgently needed medical programs to deal with a worsening local coronavirus outbreak.

The fund's economic forecast is more downbeat than some major investment firms. Goldman Sachs, for example, earlier this month raised its U.S. forecast to -4.2% from -5.2%.

The fund's forecast also carried a stark warning for investors, who have been buoyed by a stock market recovery from the lows of late March.

"The extent of the recent rebound in financial market sentiment appears disconnected from shifts in underlying economic prospects," the fund said.

If investors subsequently decide they have been overly optimistic, financial conditions could tighten and further hobble the recovery, the fund warned.

That's not the only question clouding the forecast. Uncertainty over the pandemic's future course, including prospects for a vaccine, weigh on assessments of economic growth. A medical breakthrough could render obsolete forecasts of a decline.

Low-income countries also are likely to be especially hard hit, with inequality set to worsen, the fund said. Progress in recent years on reducing the share of the world's population living in extreme poverty - less than $1.90 per day - could reverse amid the global economic hurricane.

Earlier this month, Kristalina Georgieva, the fund's managing director, called the pandemic recession "a crisis like no other" and said that by the end of this year, an unprecedented 170 countries would see average individual incomes fall.