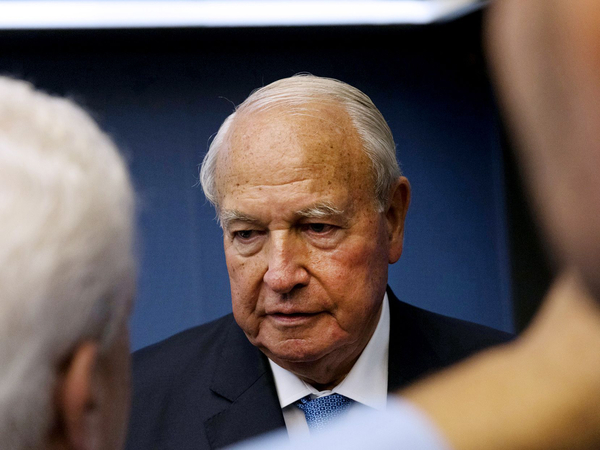 Billionaire Heinz Hermann Thiele, during a television interview at the Frankfurt Stock Exchange in Frankfurt, Germany, on Oct. 12, 2018. MUST CREDIT: Bloomberg photo by Alex Kraus.

Billionaire Heinz Hermann Thiele told Frankfurter Allgemeine Zeitung that he'd support the package at Thursday's special shareholder meeting. He had earlier criticized a steep discount being granted to the German government on a 20% stake, and he had the votes to stop it single-handedly.

"I will vote in favor of the proposed resolution," Thiele told the newspaper in an interview published on its website Wednesday.

With Thiele's support, the measure appears likely to surpass the two-thirds backing required for its approval. Because only 38% of Lufthansa shareholders registered for the special meeting, Thiele's 15.5% stake in the company translates into about 41% of the votes. Lufthansa needs to secure about half the remaining votes registered for the share sale to pass.

Analysts at Societe Generale and Berenberg both said they'd expect the measure to prevail with the support of the 79-year-old Thiele. Mark Manduca, an analyst with Citibank, projects the stock to jump as much as 10% if the deal goes through.

Securing a state holding would be a victory for Finance Minister Olaf Scholz, pleasing his Social Democratic allies and bolstering his ambitions to run for chancellor next year. Economy Minister Peter Altmaier would secure a landmark deal that's meant to serve as a model for the government's plan to take a more activist approach to managing Germany's economy.

Unions, many investors and proxy advisory firms recommend shareholders back the deal. It's not clear what the rationale for blocking the package would be without a major investor proposing an alternative.

"A government-orchestrated bailout is better than insolvency," said Patrick Schuchter of Union Investment, holder of a 0.12% stake. He plans to vote for the rescue, despite the drawbacks for shareholders. "Investors need to choose the lesser evil or sell their shares."

Lufthansa shares have fallen about 45% this year after the coronavirus forced airlines across the globe to ground fleets. The biggest carreir in Europe now has a market cap of about $4.8 billion -- less than one-third of Thiele's fortune. It had warned previously that it was facing a cash crunch and would have trouble paying wages in July.

Labor too has gotten behind the package, despite Chief Executive Officer Carsten Spohr's plan to reduce staffing by more than 20,000 positions. A potential insolvency filing, which the airline warned was possible in the event the bailout was shot down, could cause job losses on an even larger scale.

"We extraordinarily welcome the decision to support the state aid package for Lufthansa at tomorrow's annual general meeting," Christine Behle, a supervisory board member and deputy chairman of labor union Ver.di, said in an emailed statement. "With this the survival of the company would be secured and an insolvency avoided."

The meeting starts at 12 p.m. in Frankfurt. Spohr will address shareholders before opening the floor to questions. The process could take several hours before the vote proceeds and the results are released later in the afternoon.