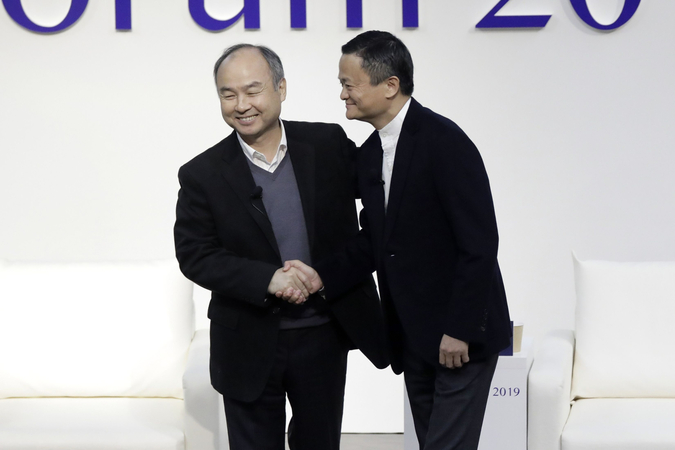 The billionaire said his departure shouldn't be interpreted as signifying any disagreements, even though Alibaba co-founder Jack Ma is quitting SoftBank's board at the same time. Ma and Son have maintained a close friendship since the Japanese entrepreneur was an early investor in Alibaba and helped it along to its current value of roughly $600 billion, calling it the crown jewel of SoftBank's portfolio.

"It's not like we had a fight," Son said during the virtual shareholder meeting. "This was perfectly amicable."

While the mutual departures are unlikely to have an immediate impact on either company, they mark the end of an era. The two men are among the most successful entrepreneurs of their generation and have been able to rely on each other's advice for decades. Son was on Alibaba's board as it went public in 2014 in the largest initial public offering in history. When SoftBank ran into trouble with investment losses this year, Son was able to use his Alibaba stake to raise much-needed capital.

"The joint board membership was a big positive for both companies because it gave them a way to benchmark their respective business models," said Michiaki Tanaka, a business school professor at Rikkyo University in Tokyo. "Not having that board-level contact is a big loss."

Alibaba remains Son's most successful investment by far and SoftBank's most valuable asset. In early 2000, Son invested $20 million into the then-unknown web portal connecting Chinese manufacturers with overseas buyers, a stake that is now worth more than $150 billion. That spectacular return cemented his reputation as an investor and later helped him raise the $100 billion Vision Fund. Son has previously spoken highly of Ma.

"He had no business plan, zero revenue," Son said about Ma on The David Rubenstein Show. "But his eyes were very strong. I could tell from the way he talked, he has charisma, he has leadership."

Son is known for anointing the entrepreneurs he finds particularly promising as "the next Jack Ma," and Alibaba has long served as the standard against which he has judged SoftBank's other startup investments. But that's also made Son vulnerable to charismatic founders like WeWork's Adam Neumann, whose many governance transgressions led to the office-sharing firm canceling its initial public offering last year. WeWork, once thought to be worth $47 billion, has lost more than 90% of its value.

Son's recent track record has been spotty. Starting with the WeWork fiasco, he has suffered a string of setbacks at portfolio companies including Wag Labs, Zume Pizza and Brandless Inc. SoftBank lost almost $18 billion writing down the value of its startup companies in the last fiscal year.

Still, Son struck an optimistic note at the shareholder meeting Thursday. He began the presentation to investors in typical fashion, reaffirming his conviction that a global digital transformation and the advent of artificial intelligence -- both accelerated during the pandemic -- will help his investments in the likes of TikTok-owner ByteDance Ltd. and British chip designer Arm Ltd.

SoftBank is in the process of offloading 4.5 trillion yen (about $42 billion) of assets to bankroll stock buybacks and slash debt to reassure investors. On Thursday, the company announced a third 500-billion-yen buyback, having completed an earlier one this month.

The company this week agreed to sell a stake in T-Mobile US for as much as $20 billion. Together with the $11.5 billion from issuing contracts to sell Alibaba stock and a sale of stock in its domestic telecom unit, Son's company has now completed 80% of its envisioned asset unwinding, he said.

Son said he was "graduating" from Alibaba's board. But the two-decade-long relationship produced few cooperative venture of note, even while the two companies were constructing e-commerce empires in their respective markets. In 2010, the two agreed to link their online platforms to allow users of SoftBank's Yahoo Japan to buy products on Alibaba's Taobao site, but the project failed to gain momentum. In 2015, Alibaba backed SoftBank's failed bipedal robotics business.

"Following Jack Ma leaving the SoftBank board, Son stepping down from Alibaba is merely a symbolic end of an era," said Justin Tang, head of Asian research at United First Partners in Singapore. "It will be business as usual for both companies."

A shareholder asked at the Thursday meeting how many of the 88 companies SoftBank's Vision Fund currently has on its books will be the next Alibaba. Son's answer was that there are one or two "mini-Alibabas."