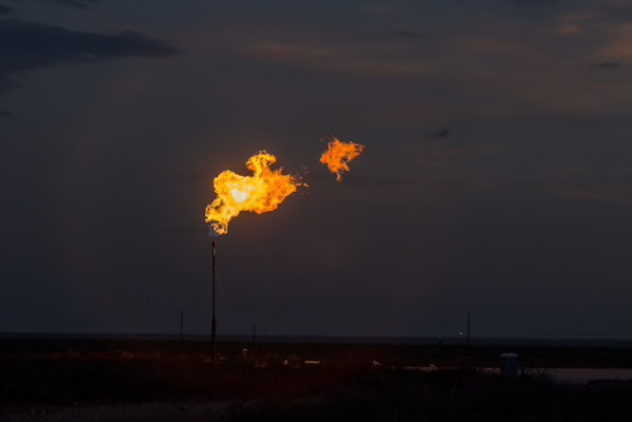 A gas flare is seen in a field at dusk near Mentone, Texas, on Aug. 31, 2019. MUST CREDIT: Bloomberg photo by Bronte Wittpenn

The shale bust has reached a grim milestone by claiming the pioneer of America's drilling renaissance. But Chesapeake Energy Corp., which filed for bankruptcy protection on Sunday, is just the latest in a long list of casualties.

More than 200 North American oil and gas producers, owing over $130 billion in debt, have filed for bankruptcy since the beginning of 2015, according to a May report from law firm Haynes & Boone. This month alone, seven oil and gas companies have gone under, tying December 2015 for the busiest on record after crude prices plunged amid the Covid-19 pandemic, according to data compiled by Bloomberg.

The shale boom spearheaded by the likes of Chesapeake a decade ago was fueled by debt. Profitability and shareholder returns have been consistently disappointing, and investors had already grown wary of throwing more money into shale before this year's oil crash. The rate of default on high-yield energy debt stood at 11%, Fitch Ratings said in a June 11 report, the highest level since April 2017.

Here are a handful other notable shale bankruptcies so far this year:

An oil explorer focused on the Bakken Shale in North Dakota, Whiting Petroleum Corp. was already facing head winds before 2020. Last year, the Denver-based company announced it would fire a third of its workforce and scale back production targets after posting a surprise quarterly loss.

Crude prices had their worst quarter ever in the first three months of 2020, with oil heavyweights Saudi Arabia and Russia failing to agree on supply cuts just as worldwide lockdowns wiped out demand for fuel. That was enough to push Whiting, saddled with $3.6 billion in debt, into bankruptcy on April 1.

But not before the board approved $14.6 million in cash bonuses for top executives to "ensure the stability and continuity of the company's workforce and eliminate any potential misalignment of interests that would likely arise if existing performance metrics were retained," the company said in a filing the same day it filed for Chapter 11 protection.

Another Colorado driller, Extraction Oil & Gas Inc. focused exclusively on the Denver-Julesburg Basin in the Rockies. It filed for Chapter 11 on June 15, offering to ease its debt burden of roughly $1.5 billion by giving noteholders 97% of new common stock to be issued.

Extraction had withdrawn its 2020 guidance in May and warned it may have to file for bankruptcy. Then, in early June, the company announced plans to pay 16 executives and senior managers a total of $6.7 million in return for staying with Extraction ahead of a possible default on its bond payments.

Ultra Petroleum Corp. filed for its second bankruptcy in May, four years after its first. Listing $2.56 billion in debt and $1.45 billion in assets in its Chapter 11 filing, the Englewood, Colorado, driller reached a deal with most of its senior creditors that would slash $2 billion in debt, while looking to restructure within three months.

In its struggles to stay afloat, Ultra went so far as to suspend its drilling program in January to bolster free cash flow and focus on paying down debt. The explorer first filed for bankruptcy in 2016 and emerged the following year, just as the shale patch was beginning to crawl out of what had been the worst oil industry crash in a generation -- until this year.

Soon after his ouster from Chesapeake in 2013, co-founder Aubrey McClendon went to work building a new empire, American Energy Partners. But after McClendon died in a car crash three years later, the company shut down.

Part of that business, American Energy - Permian Basin, merged with Sable Permian Resources LLC last year. That particular business was widely seen as having among the best assets of a half dozen oil-and-gas acquisition vehicles that McClendon set up during his brief tenure at American Energy Partners.

Sable filed for bankruptcy last week in Houston alongside affiliates, listing at least $1 billion of assets and liabilities each.

The Permian explorer Lilis Energy Inc. followed right on the heels of Chesapeake, filing for bankruptcy protection on Monday.

The company said it was a victim of the coronavirus-induced downturn. Lilis was struggling even before the pandemic, warning in January that it might default after lenders slashed its credit line.

"Like many companies in the oil and gas industry, we have been impacted by the severe downturn in commodity prices throughout the Covid-19 pandemic," Joseph C. Daches, Lilis's chief executive officer, said in a statement announcing the filing.