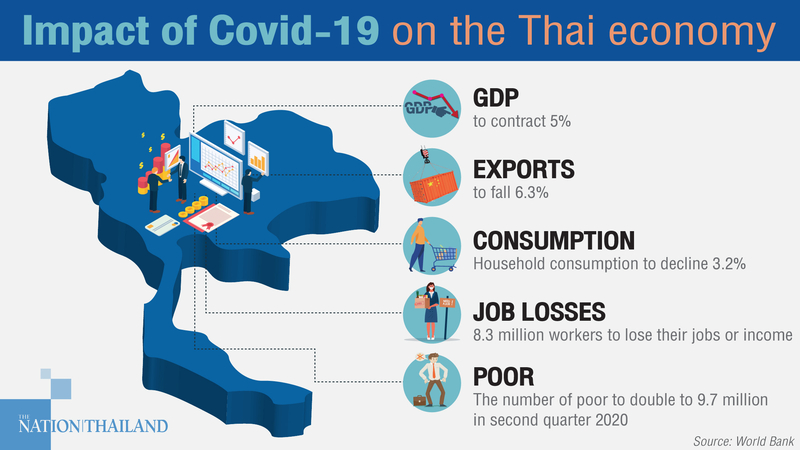 Thailand’s economy is expected to be impacted severely by Covid-19, shrinking by at least 5 per cent in 2020 and taking more than two years to return to pre-virus GDP levels, according to the World Bank’s Thailand Economic Monitor, released today (June 30).

The pandemic has “shocked the economy especially in the second quarter of 2020 and has already led to widespread job losses, affecting middle-class households and the poor alike”, it said.

While Thailand has been successful in stemming the tide of infections over the last three months, the economic impact has been severe. The tourism sector, which makes up close to 15 per cent of GDP, has been hit hard, with a near cessation of international tourist arrivals since March 2020, the monitor said.

Exports are expected to decline by 6.3 per cent in 2020, the sharpest quarterly contraction in five years, as demand for Thai goods abroad remains weak by the global slowdown. Household consumption is projected to decline by 3.2 per cent as restrictions on movement and dwindling incomes limit consumer spending, especially in the second quarter of 2020.

As Thailand starts to ease mobility restrictions, domestic consumption – traditionally the strongest driver of growth – may pick up in the second half of 2020 and in 2021, but economic recovery will be gradual and uncertain, it said. In the baseline, the economy is projected to grow by 4.1 per cent in 2021 and by 3.6 percent in 2022, which represents a slow recovery to pre-Covid GDP levels by mid-2022. The shape of the recovery is subject to considerable downside risks, including weaker global growth, feeble tourism, and continuing trade and supply chain disruptions.

“The strength of the economic recovery will depend in part on an effective policy response, in particular effective support to vulnerable households and firms,” said Birgit Hansl, World Bank country manager for Thailand. “As the recovery phase begins, a key challenge will be how to help people who lost their jobs reconnect with the labour market. Active labour market measures, such as wage-subsidies targeting individuals in the most vulnerable sectors, and on-the-job training to promote re-employment, should be explored.”

An estimated 8.3 million workers will lose their jobs or income because of the Covid-19 crisis.

The report found that the number of “economically insecure”, or those earning below US$5.5 (Bt170) per day, is projected to double from 4.7 million people in the first quarter to 9.7 million people in the second quarter of 2020. In particular, the share of economically insecure middle-class households with workers in the manufacturing and services sector will rise three-fold, from 6 per cent to 20 per cent.

To protect vulnerable households, the World Bank report recommends extending social protection coverage to ensure that no gaps remain for the elderly and migrant workers.

The report also recommends continuing cash transfers for the most vulnerable groups and, where possible, linking such transfers to training, mentoring and other types of support that could create income-generating opportunities. Over the medium term, Thailand could consider establishing programmes with universal benefits to help cushion against epidemic outbreaks as well as other negative shocks, complemented by more targeted programmes for the poor, it said.

“For vulnerable companies, the nature of support will need to shift from emergency relief to more support for productive firms that are still standing,” said the bank’s senior economist for Thailand, Kiatipong Ariyapruchya. “This includes redirecting fiscal support from emergency measures to temporary job creation programmes by easing firm participation in public procurement and public works.”

The Bank of Thailand recently revised its forecast to a 8.1 per cent GDP contraction. World Bank economists said the forecast, which is subject to downside risks, is not different from others in times of big shock.

All analysts agree that the impact from Covid-19 is severe and it would take two to three years before economic recovery can reach pre-virus-crisis levels.