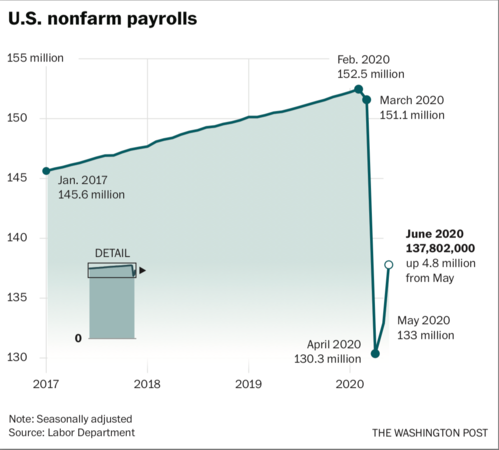 WASHINGTON - The U.S. economy added a record 4.8 million jobs in June, according to federal data released Thursday, but a surge in new infections and a spate of new closings threatens the nascent recovery.

Two key federal measurements showed the precarious place the economy finds itself in three and a half months into the pandemic as the country struggles to hire back the more than 20 million workers who lost their jobs in March and April. 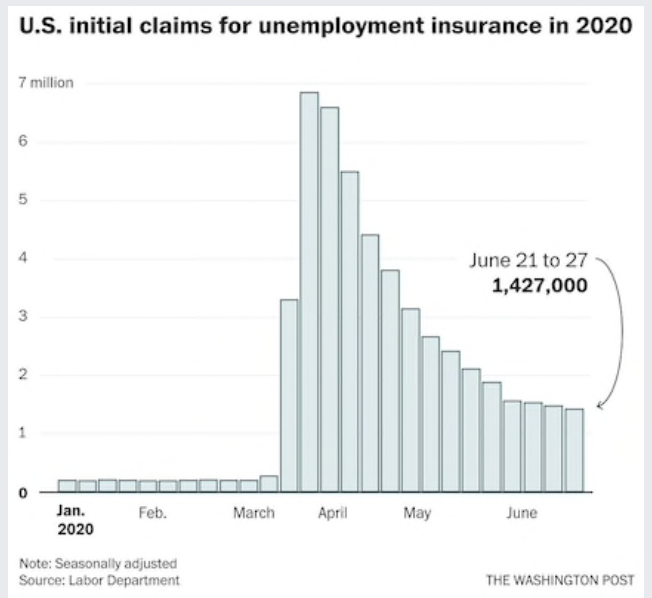 While companies have continued to reopen, a large number of Americans are finding their jobs are no longer available. The unemployment rate in June was 11.1 percent, the Bureau of Labor Statistics said, down from a peak of 14.7 percent in April but still far above the 3.5 percent level notched in February.

And another 1.4 million Americans applied for unemployment insurance for the first time last week and more than 19 million people are still receiving unemployment benefits, stubbornly high levels that show how many people are struggling to find or keep work.

The Congressional Budget Office on Thursday said the coronavirus pandemic gave such a shock to the labor market that it would not fully recover for more than 10 years. 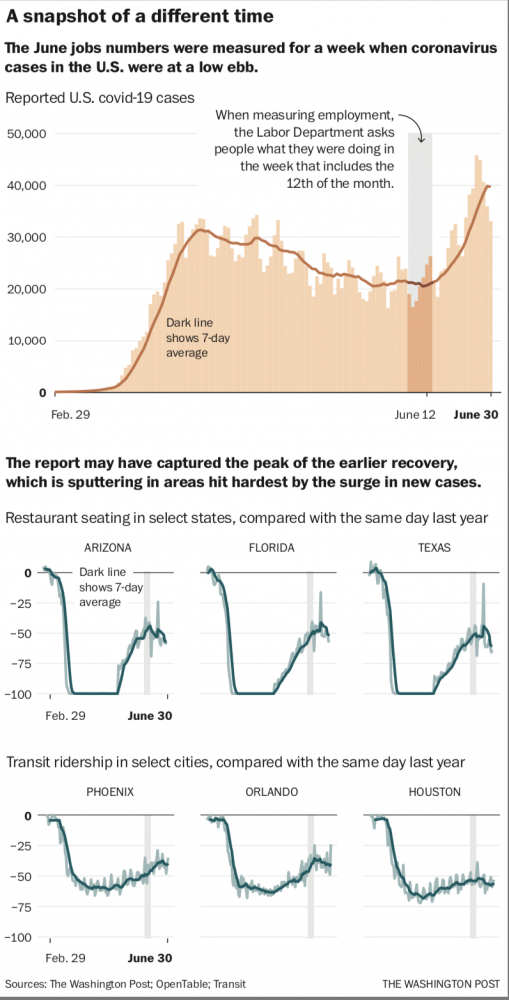 President Trump touted the jobs that were added at a news conference called shortly after they were released, saying they were a sign that "America's economy is now roaring back to life like nobody has ever seen before."

"All of this incredible news is the result of historic actions my administration has taken," Trump said.

But his top aides acknowledged there was still a long way to go.

"There is still a lot of hardship, and a lot of heartbreak, in these numbers," National Economic Council Director Larry Kudlow said. "I think we have a lot more work to do."

The stock market initially rose on the news, with the Dow Jones industrial average rising 400 points, or 1.5 percent, before retreating. It closed up 92 points on the day.

Economists called the 4.8 million jobs added encouraging, saying they were a sign that the massive financial incentives that Congress passed appeared to have succeeded at stanching even greater job loss.

But the good news came with a couple of significant asterisks: It was gathered the week of June 12, when the country was reporting less than 25,000 new cases a day, not the current average of more than 40,000 that has sent new closures and shutdowns cascading across states and counties.

"The pandemic pushed us into a very deep economic hole," said Mark Zandi, chief economist at Moody's Analytics. "We can certainly fall back."

The more than 14.7 million people who are still out of work have left the country with an unemployment rate higher than any point during the Great Recession.

The unemployment insurance data, based on statewide claims that are separate from the survey that informs the jobs report, paints an even less sanguine picture: Last week was the 15th straight where unemployment claims exceeded 1 million, a sign that the economic recovery has not taken hold for many Americans.

The strong month of job gains was driven by robust hiring in the leisure and hospitality sector, with 2.1 million additional jobs added, accounting for about 40 percent of the total gained for the month. Food services and drinking establishments saw their payrolls swell by 1.5 million people, but they still remain 3.1 million lower than before the pandemic.

These are the industries that are getting hit hard in the past two weeks by new closings, as a numbers of states shuttered bars and restricted restaurant service as they try to get the case surge under control.

Retail gained back 740,000 jobs, though employment remains at less than half its pre-pandemic level; education and health services regained 568,000 jobs and health care 358,000 as people returned to the offices of dentists, physicians and other medical practitioners.

The data bring into sharper focus the turmoil facing the U.S. economy after many businesses sent workers home in March during the beginning of the spike in deaths caused by the virus.

Many companies began rehiring in May and June, but there are signs that some workers are getting laid off for the second time in just a few months.

Others technically remain employed but are working drastically reduced schedules - more than 9 million workers reported working part time because of economic reasons, more than double the level in February before the pandemic. Still a participation rate of 61.5 percent in June, slightly up from April and May but nearly a percentage point below February, indicates that others may be leaving the labor force all together - an echo of the deep economic turbulence in the Great Recession.

Economists said there are other reasons to be concerned as incentives for businesses to retain employees and some benefits that have allowed people out of work to stay afloat financially are winding down without more federal action.

Federal and state officials struggled to time their reopening efforts in April and May, in some cases ignoring warnings from public health officials. Now, cases in some of the states that reopened the fastest, or with the loosest restrictions, are seeing the biggest spikes, such as Florida, Arizona, and South Carolina.

In recent days, Texas shut down all bars just weeks after they had reopened. California announced the closure of bars and indoor dining in 19 counties, more than 70 percent of the state. And at least nine other states have slowed or reversed their reopenings. Restaurant bookings have begun to sink in hard-hit states such as Florida, Texas and Arizona. Job postings on the Indeed website, though up from a low of 39 percent, are still down 24 percent from last year.

Many workers are starting to report being laid off or furloughed for a second time in just a few months.

But those effects will not be captured in these reports for the most part.

In the May jobs report, there was a particular focus on a misclassification error the Bureau of Labor Statistics said it made that marred how it calculated the unemployment rate. On Thursday, it said that issue had been mostly been fixed.

The disconnect stems from the way surveyors interview people about their job status, as many Americans are unclear about whether they have actually been laid off or just sent home temporarily.

There are other strains on the economy. Only a third of the 22 million Americans who lost their jobs in March and April have returned to work so far. The number of people who reported permanently losing a job rose by 588,000 in June, bringing the total since February to 2.9 million

"It's becoming clearer that some of what people hoped were temporary layoffs are now turning into permanent layoffs," said Donald Marron, an economist at the Urban Institute.

The new unemployment claims, a different measurement which has stagnated around 1.4-1.5 million a week during the last month, remain at more than double the pre-pandemic record, pointing to the magnitude of the crisis. With the supplemental insurance given to gig and self-employed workers, that number was well over 2 million last week.

"I would take solace with these numbers but I wouldn't pop any champagne," Zandi said. "It's ten times what you would see in a well-functioning economy."

At the start of the pandemic, most workers believed they would quickly be rehired, but as the deadly virus continues to be a danger, more and more businesses are telling workers they will never get their old job back.

The job loss has had a disproportionate affect on people of color as well.

Federal legislators continue to wrangle over proposals that would continue or extend some of the emergency unemployment benefits that will run out by the end of July. Democrats and the White House are at odds over how to authorize the funds even though there are large numbers of people still out of work.

White House officials told outside advisers on Thursday that the jobs report makes it less likely they will approve legislation that would cost as much as $2 trillion or $3 trillion, according to Stephen Moore, a conservative close to the White House. Moore said the jobs report is also likely to shore up White House opposition to extending the significant increase in unemployment benefits approved by Congress in March.

"There will be a phase four, but this makes the case in their eyes for a smaller one and makes even stronger the case for not extending the unemployment benefits," Moore said. "You don't have the sense of crisis you did a few weeks ago."

Trump and Treasury Secretary Steven Mnuchin on Thursday talked about providing more money for businesses and schools, but Mnuchin said they had not decided on what to do for households.

"Our work is not done until every single American who lost a job because of Covid is back to work," Mnuchin said.

There are some positive indications about the country's reopening. Data gathered by the HR software company Kronos on 30,000 private industry businesses and 3.2 million hourly workers found that businesses had by the end of last week recovered more than half - 59 percent - the work shifts they lost between March and April. Even in places where coronavirus cases are still surging, more workers clocked in during the last week of June than at the beginning of the month.

"From February through June, we will have seen an enormous amount of job loss," Jason Furman, a former top economic adviser to President Barack Obama, said on a conference call organized by Rep. James Clyburn, D-S.C., the chairman of the House's coronavirus subcommittee. "Whatever happens month to month, the economy is in a much worse place than it was four months ago."