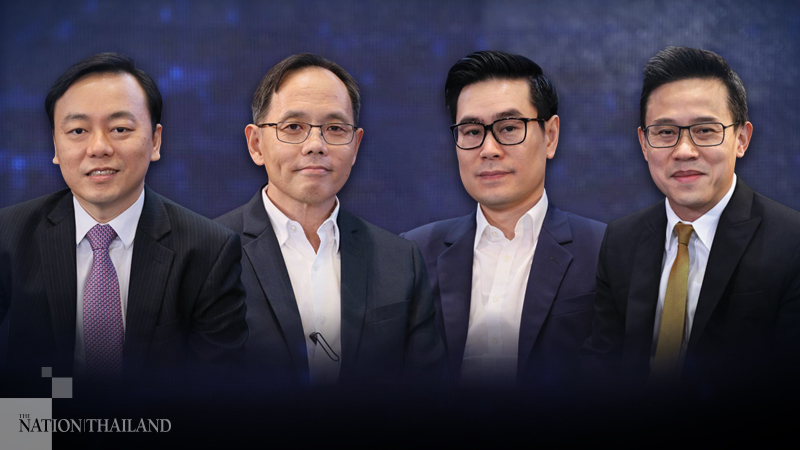 Up to 30 per cent of total bank loans may be restructured under the government’s scheme, while local corporates may need up to Bt1.7 trillion liquidity injection to survive the Covid-19 fallout, economists warned, predicting that it will take a while for the economy to fully recover.

The Thai economy this year is expected to contract even deeper than it did during the 1997 Asian financial crisis, said Charl Kengchon, executive chairman at Kasikorn Research Centre. 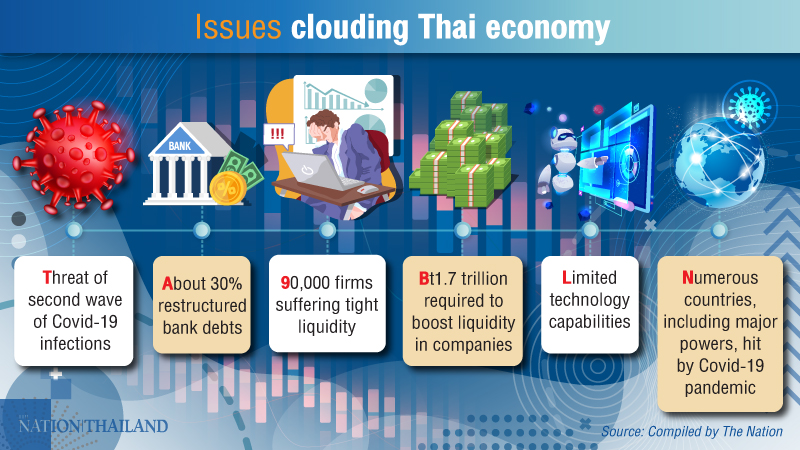 The Bank of Thailand recently projected that the GDP will contract 8.1 per cent, though there is a risk that it will drop even further due to the threat of a second wave of Covid-19 infections, he said at an exclusive roundtable hosted by the Nation Group and Nation TV on July 2.

This crisis is different from the one in 1997-1998, because banks now are far stronger, he said.

“The most important thing to focus on now is the asset quality, as restructured debts were estimated to be 21 per cent of Bt15 trillion of total bank loans in the first quarter, and it might spike to 29.9 per cent in the second quarter,” he said.

Though the government has implemented financial aid to support corporates, these measures wrap up in October. If by then the economy rebounds and businesses survive, then banks will not have much trouble with the quality of assets, but if it doesn’t, then banks will have huge problems with a large number of debts needing restructuring. This is when we will see if the government implements extra support measures, he said.

“Everyone is like a Covid-19 patient, surviving with the help of ventilators, but what happens after that is still not clear. Nobody knows if businesses will be able to come back,” he said.

Another key issue is the rate of unemployment, Charl said, adding that businesses need large sums of money to keep their employees, so the government may need to provide more support via the national budget.

It is also the government’s job to boost confidence in the economy, so banks are willing to lend and affluent consumers are willing to spend. Thus, changes to the tax policy may be necessary, he added.

Somprawin Manprasert, head of Krungsri Research and chief economist at Krungsri Bank, said the government has been successful in controlling the spread of the virus, but it was at the cost of an economic downturn.

“How long can we continue to live like this?” he asked. “According to stress-test trials, we found that corporates need an injection of Bt1.7 trillion to survive the crisis. As many as 90,000 companies are suffering from liquidity squeeze,” he said, adding that the government’s repeated stimulus packages may not answer the problem – an injection of cash would be better.

“If government policies fail to address economic woes, the recovery will be L-shaped, and it may take more than three years for the economy to recover,” he warned.

The Krungsri Research team has predicted that the economy will contract 10.3 per cent this year, only growing 2.9 per cent next year, before expanding 4 per cent in 2022. The economy is only expected to return to pre-crisis levels in 2023.

Despite Thailand having large international reserves, economic policies have not yet been effective in using available resources, he added.

Burin Adulwattana, chief economist at Bangkok Bank, said the impact the virus has had on the economy is possibly the worst in 120 years.

“A stronger baht is also making exports worse, while other economies are also weakening, and the Thai tourism and auto industries are contracting sharply,” Burin said.

The expected number of foreign arrivals is only expected to hit 9 million, compared to more than 30 million yearly normally, he said.

The economy has also been constrained by the dwindling labour force, while the country becomes an ageing society, he said.

Planned investment in the Eastern Economic Corridor (EEC) may not be enough to upgrade the economy into a 4.0 economy that is driven by information technology.

While 30 per cent of the labour force is in the agriculture sector, which accounts for just 8 per cent of GDP, the challenge is to boost their productivity or help them migrate to the industrial sector.

The high tax environment does not encourage highly-skilled foreign workers to move to Thailand either, he said, adding that they prefer to work in Hong Kong or Singapore where the tax rate is much lower.

Yunyong Thaicharoen, first executive vice president of Economic Intelligence Centre (EIC) at Siam Commercial Bank, said the ongoing crisis is worse because it affects both demand and supply sides. Though the government has started relaxing lockdown restrictions, debts and fragility of small and medium-sized enterprises (SMEs) remain issues of concern.

“Recovery will be U-shaped because Thailand depends too much on the global market, while every country is affected now. We have revised our projection of the GDP to contract 7.3 per cent from the previous projection of a 5.6 per cent shrinking,” he said.

Though the government has responded quickly in supporting the economy, its next step should be to support targeted groups that need immediate help, he said. While further lowering interest rates may not help much, the most important thing is to help banks gain more confidence and give liquidity support to SMEs, he said.

“Covid-19 has exposed the Thai economy’s weak point, which is our limited technology capacity. China, for instance, successfully upgraded its technology and so it was able to restore consumer confidence quickly. Now Thailand’s biggest challenge is to have a clear roadmap and strong cooperation between public and private sectors,” he added.