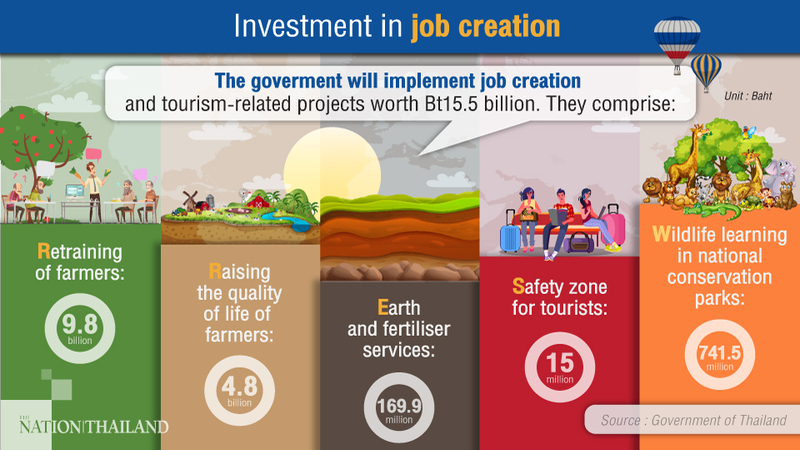 The Cabinet has approved the first batch of economic stimulus projects worth Bt92.4 billion and also allocated Bt15.5 billion to support job creation and tourism-related projects.

Traisulee Traisoranakul, the government’s deputy spokeswoman, said the Cabinet on Wednesday (July 8) agreed in principle to okay the first batch of economic stimulus projects under the Bt400-billon emergency package to shore up the economy impacted by the Covid-19 pandemic.

The combined cost of the first 186 projects approved in principle is Bt92.4 billion. The final approval will follow shortly, Traisulee said.

The Cabinet has agreed to allocate Bt15.5 billion to finance five projects which are designed to create employment and promote tourism. Other projects will be approved in subsequent Cabinet meetings.

First, the Agriculture and Cooperatives Ministry will launch retraining projects for farmers with a budget of Bt9.8 billion. The projects are expected to create 8,018 jobs and generate income for 44,099 farmers nationwide.

Second, the Interior Ministry will implement projects costing Bt4.8 billion to raise the quality of life of farmers. These projects will create 6,492 jobs for farmers and generate income for 25,179 farmer households and increase tree plantation to 25,759 rai.

Third, the Agriculture and Cooperatives Ministry will implement community businesses regarding earth and fertiliser services with a budget of Bt169.9 million. The ministry aims to create 2,364 jobs and boost value-added business worth Bt253 million as well as reduce chemical fertiliser usage by 20 per cent, or by 18,000 tonnes.

Fifth, the Natural Resources and Environment Ministry will organise wildlife learning in national conservation parks for tourists with a budget of Bt741.5 million. These projects will create jobs for 1,250 people in wildlife conservation areas, including 125 local tourist guides and entrepreneurs.

She said the Cabinet had also approved Thailand’s hosting of MotoGP motorcycle racing from 2021-25 with a budget of Bt900 million.