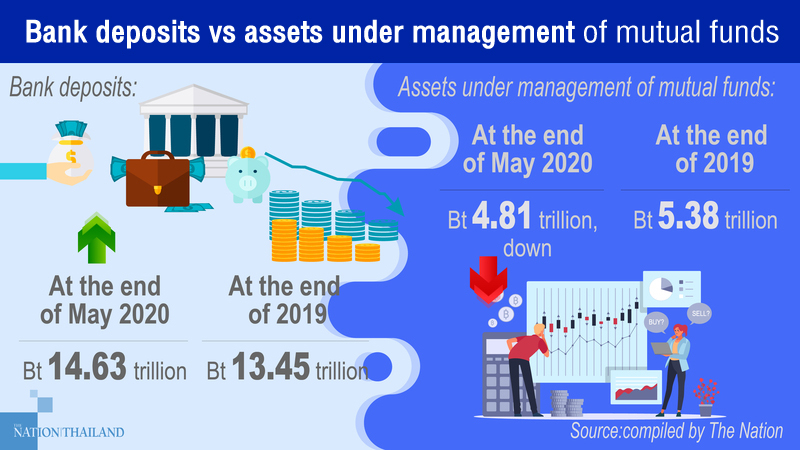 Despite lower interest rates this year, bank deposits have risen sharply as investors have stayed away from investment in risk assets.

Liquidity has flooded the banking system as investors delay investment in risk assets and put their money into bank accounts instead, Adisorn Sermchaiwong, president and chief executive officer at CIMB Thai, said.

“Despite lower interest rates, banks have excess liquidity, as people do not know where to invest. Money is expected to continue flowing into banks but in smaller amounts,” he said.

Some may start to invest in corporate bonds, as the spread of Covid-19 has been contained in Thailand, he added.

Thaweelap Rittapirom, executive vice president at Bangkok Bank (BBL), said investors were cautious about making new investments so they had parked their money in banks. Banks' deposits are expected to remain high until the end of this year, he said.

He said that rising deposits did not increase the cost for banks, as bankers could find ways to manage the increasing liquidity.

Kangana Chockpisansin, head - research at Kasikorn Research Centre, said banks had cut their interest rates in response to the cut in the key policy rate by the Bank of Thailand, which has lowered its policy rate to 0.50 per cent.

She pointed out that deposits in March rose by Bt750 billion, by Bt238 billion in April and by Bt55 billion in May.

Deposits rose 12 per cent year on year in the first half of the year and are projected to rise 9-12 per cent for the whole year, up by Bt1.4 trillion to total Bt14.6 trillion, the largest deposit pool in nine years.

In March, AUM of mutual funds decreased by 15.3 per cent as investors were wary of risk assets.

“The flow into bank deposits partly came from investment funds, driving bank deposits up to Bt14.6 trillion in the first five months of the year, up 13.59 per cent year on year, or 8.76 per cent up from the end of last year,” he said.

Among the five largest banks, Krungthai Bank’s deposits rose by 10.75 per cent, Kasikornbank’s by 10.16 per cent, BBL’s by 8.95 per cent, Krungsri’s by 6.27 per cent and Siam Commercial Bank’s by 3.82 per cent year on year in the first five months of this year. Bank deposits have risen two times faster than lending, he added.