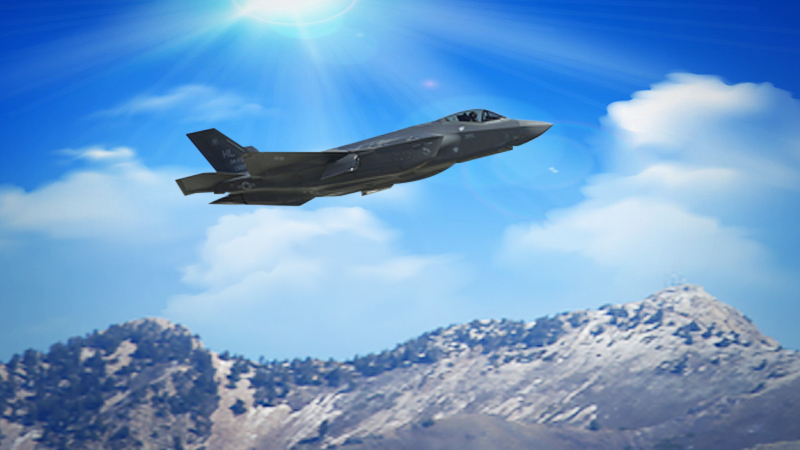 A Lockheed Martin F-35A jet flies during a training mission at Hill Air Force Base in Utah in 2016. MUST CREDIT: Bloomberg photo by George Frey

Lockheed Martin is in talks with the Pentagon over whether it will reimburse the Defense Department for parts it provided for the F-35 jet that were not ready to install.

The nation's No. 1 defense contractor and Pentagon contracting officers "are now negotiating appropriate consideration for parts delivered incomplete," the department's F-35 program office said in a statement on Monday.

Air Force Lieutenant General Eric Fick, the F-35 program manager, said in a statement that the scope of the parts issue "has been agreed upon and "this is an important first step" but "there is more work to be done" to assess the "corresponding financial consideration."

The parts were considered inadequate for installation not because of safety or manufacturing flaws but because they were delivered without the required inclusion of electronic data, such as a part's history and its remaining useful life, needed by maintenance crews. Parts are not supposed to be installed without the data.

Lockheed spokesman Brett Ashworth, in a statement Monday night, said that although "there is no agreement at this time regarding consideration and what form it would take, Lockheed Martin is committed to discussions in good faith with the U.S. government."

Air crews who maintain the next-generation stealth fighter had complained that they've been working extra hours to keep the Pentagon's costliest aircraft flying because so many parts were not ready to be installed.

In a June 2019 report, the Pentagon's inspector general disclosed the problem and recommended that the Pentagon consider seeking refunds or services free of charge for the parts. This year's defense policy law directed the Pentagon to "seek relief" for delivery of "non-compliant ready-for-issue spare parts pursuant to a contract under the F-35 aircraft program."

Each F-35 has about 1,000 parts out of roughly 50,000 that require the electronic logs, according to the program office. The parts problems on the $398 billion program, the Pentagon's largest, are occurring even after 500 of the stealthy aircraft have been delivered through March, 147 of them to other countries.

The parts issue and status of refund efforts will be a focus of a House Oversight and Reform Committee hearing Wednesday. The program office said Lockheed's 2021-2023 support contract requires that it deliver the required information for 99% of the special parts in order to receive its contract fees.

Theresa Hull, the assistant inspector general who managed the parts report, said Monday in an email that her office hasn't been provided any further specifics regarding the negotiations with the company but that her office believes the Pentagon "pursuing compensation on behalf of the America taxpayer is a positive first step toward safe-guarding taxpayer dollars."