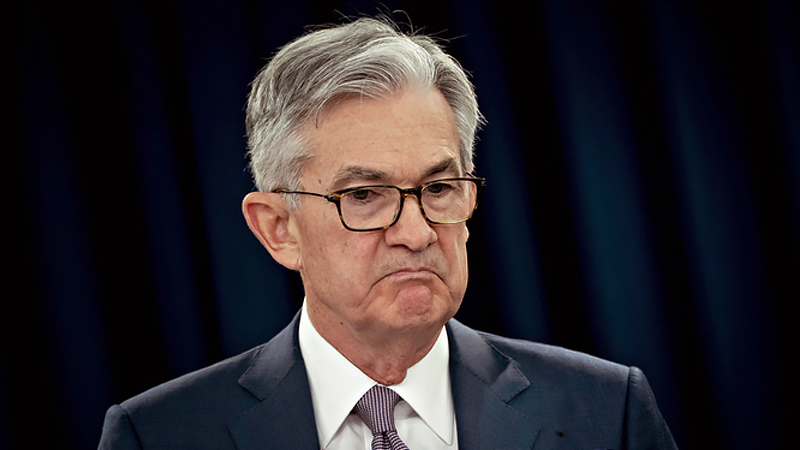 WASHINGTON - The head of the Federal Reserve said Wednesday that rising numbers of coronavirus cases since mid-June are beginning to weigh on the economy, reinforcing that the fate of the recovery depends on containing the pandemic.

"On balance, it looks like the data are pointing to a slowing in the pace of the recovery," Federal Reserve Chair Jerome Powell said during a news conference on Wednesday. "I want to stress it's too early to say both how large that is and how sustained it will be."

Job gains from May and June came "sooner and stronger" than expected, Powell said. But those encouraging signs were closely followed by a surge in coronavirus cases nationwide. Powell said that at the same time people's lives depend on containing the public health crisis, it is also important to "deal with the economic ramifications."

Powell said some measures of consumer spending, based on debit card and credit card use, have moved down since late June. Powell also mentioned recent labor market indicators that are pointing to slower job growth, especially for smaller businesses. Hotel occupancy rates have flattened out, Powell said, while Americans are not going to restaurants, gas stations and beauty salons as much as they had been earlier in the summer.

Powell said the upcoming jobs reports and other surveys will help flesh out the Fed's economic outlook, cautioning that he did not "want to get ahead of where the data are on this." But as he has for months, Powell again emphasized that the economy's recovery depends on the country's ability to stop the virus from spreading.

"The path of the economy is going to depend, to a very high extent, on the course of the virus and on the measures we take to keep it in check," Powell said. "The two things are not in conflict. Social distancing measures and a fast reopening of the economy actually go together. They're not in competition with each other."

As expected, the Fed's policymaking board decided to keep interest rates, which are already near zero, unchanged as it concluded two days of policy meetings this week. Markets responded optimistically to the news, with the Dow Jones industrial average ending up 160 points at Wednesday's close.

The Federal Reserve signaled in its statement on Wednesday that the Fed would continue to use "its full range of tools" to steer the economy out of recession, even as the virus significantly shapes the future of the economy.

"The ongoing public health crisis will weigh heavily on economic activity, employment, and inflation in the near term, and poses considerable risks to the economic outlook over the medium term," the Fed's top panel of policymakers said in a statement at the conclusion of two days of meetings.

After sharp declines, economic activity and employment "have picked up somewhat in recent months," the Fed said. Economists have been closely watching July indicators, which could help explain whether the recovery from earlier this summer is beginning to fizzle as some states and cities reimpose restrictions on businesses to combat rising coronavirus cases.

"Overall financial conditions have improved in recent months, in part reflecting policy measures to support the economy and the flow of credit to U.S. households and businesses," the Fed statement read.

To support the flow of credit to households and businesses, the Fed said it would increase its holdings of Treasury securities and agency residential and commercial mortgage-backed securities at least at the current pace over the coming months. The Fed has said its support of the markets should remain in place to help safeguard the broader financial system during the pandemic.

At his news conference, Powell said the Fed was committed to keeping its lending facilities and other emergency measures in place not only during the shutdown and reopening, but also through the "long tail where a large number of people are struggling to get back to work."

"We're in this until we're well through it," Powell said.

Powell's news conference comes as Congress clashes over another stimulus bill and an extension for enhanced unemployment benefits. On Tuesday, President Donald Trump brushed off the new $1 trillion Senate GOP coronavirus legislation as "sort of semi-irrelevant."

Powell has repeatedly said that the Fed cannot heal the economy alone and that more help will be needed from Congress to ease the pain for millions of Americans. On Wednesday, Powell said funding from the Cares Act has been key to keeping people in their homes and jobs. He praised the Paycheck Protection Program, for example, for getting money directly to businesses that couldn't necessarily have been saved through a Fed lending program.

"Lending is a particular tool, and we're using it very aggressively, but fiscal policy is essential here," Powell said. "As I've said, more will be needed from all of us, and I see Congress is negotiating now over a new package, and I think that's a good thing."

Powell has stopped short of telling lawmakers exactly what they should do, or how urgently they should act, saying it isn't his role to tell other parts of government how to do their jobs. But on Wednesday, Powell pushed the success of Congress's earlier programs as reason for lawmakers to act again, said Skanda Amarnath, research director of Employ America, a policy group that advocates for full employment and higher wages.

Amarnath said Powell's framing could give some cover to Republican lawmakers who are less convinced more help is needed, or who dispute the connection between the virus and the recovery.

"[Powell] is trying to reiterate that you can't think of this as 'either or,' " Amarnath said, adding that when it comes to tackling the pandemic and the economy, "you're going to have to tackle one to tackle the other."

For months, Powell has insisted that the virus will dictate an economic turnaround, which he says can't happen until Americans feel safe going about their daily routines. Since the Fed's last meeting in June, rising case counts have forced states to reimpose restrictions on business activity. Minutes from the Fed's June meeting showed officials were worried the United States could enter a much worse recession later this year if the pandemic is not contained.

At this week's Fed meeting, Fed leaders were expected to discuss other policy tools, such as forward guidance and asset purchases, without necessarily coming away with any firm conclusions. Economists are also awaiting the release of the Fed's long-term monetary policy review, which could change the way the Fed approaches its inflation target.