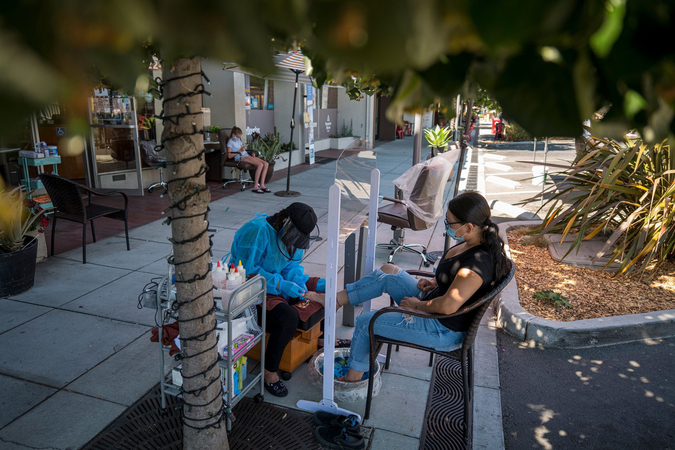 A worker gives a pedicure to a customer outside of a nail salon in Palo Alto, Calif., on July 28, 2020. MUST CREDIT: Bloomberg photo by David Paul Morris.

The number of Americans filing for unemployment benefits increased for a second straight week, a sign the economic rebound is increasingly at risk with Congress poised to potentially let supplemental $600 payments expire.

U.S. stock futures remained lower after the report, while 10-year Treasury yields extended declines. Economists in a Bloomberg survey had forecast 1.445 million initial claims, with projections as high as 1.6 million.

Almost five months into the pandemic, economic pain remains widespread, with the persistent jump in coronavirus infections and lack of a vaccine preventing a return to normal for the foreseeable future. Further challenges for Americans are in store should lawmakers allow the $600 in extra federal weekly jobless benefits to expire this week; Democrats and Republicans have remained far apart in negotiations over extending the aid that has propped up consumers and businesses.

A separate report Thursday showed the U.S. economy shrank at a record 32.9% annualized rate in the second quarter, pointing to the effects business closures and lost jobs are having on the broader economy.

"Even if the reopening goes well -- and many, many people go back to work -- it is still going to take a fairly long time for parts of the economy that involve lots of people getting together in close proximity" to recover, Federal Reserve Chairman Jerome Powell said Wednesday, after the central bank kept interest rates near zero. "Those people are going to need support."

The Labor Department said its seasonal factors had assumed an unadjusted decline of about 181,000 initial claims; the count fell by about 171,000. That resulted in an increase of 12,000 after the department applied its seasonal adjustment.

The jump in continuing claims was concentrated in California and Texas, which reported a combined increase of about 576,000 on an unadjusted basis. Florida showed a decline of about 122,000.

States reported 829,697 people filed for Pandemic Unemployment Assistance, a federal program for those not eligible for regular state programs including independent contractors and self-employed Americans. That figure was down from the prior week.

And the total number of unadjusted continuing claims fell to 30.2 million three weeks ago from 31.8 million. This figure, though, has reflected overcounting of PUA applications as states clear backlogs.