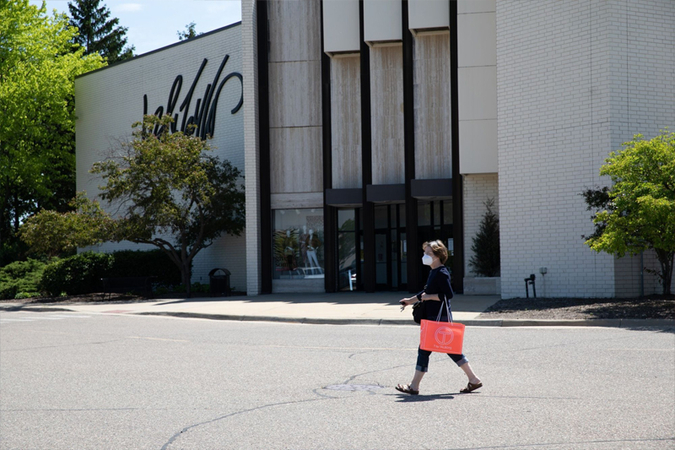 A shopper wears mask while passing in front of a Lord & Taylor Store in Novi, Mich., on June5. (Emily Elconin/Blomberg News)

Lord & Taylor, the country's oldest department store chain, filed for bankruptcy on Sunday, joining about a dozen iconic retailers that have sought Chapter 11 protection during the pandemic.

The once-storied institution, founded in New York in 1826, had in recent years fallen out of touch with high-end customers and younger shoppers. Le Tote, the clothing-rental start-up that bought Lord & Taylor last year for about $100 million, also filed for Chapter 11 bankruptcy on Sunday.

The filings come weeks after two other department store chains - Neiman Marcus and J.C. Penney - also filed for bankruptcy protection. The pandemic has wreaked havoc on already struggling retailers that have temporarily shuttered thousands of stores and furloughed more than 1 million employees since mid-March.

Le Tote had hoped to revive the flagging brand by adding makeup subscriptions, try-on boutiques and other services aimed at busy millennial shoppers.

Lord & Taylor has about 40 stores across the country, many of them in shopping malls.

In its filing, the company said it had $100 million to $500 million in both assets and debts. Its largest creditors include well-known brands such as Polo Ralph Lauren (owed $3.5 million), Michael Kors (owed $2.2 million) and L'Oreal Lancome (owed $1.2 million).