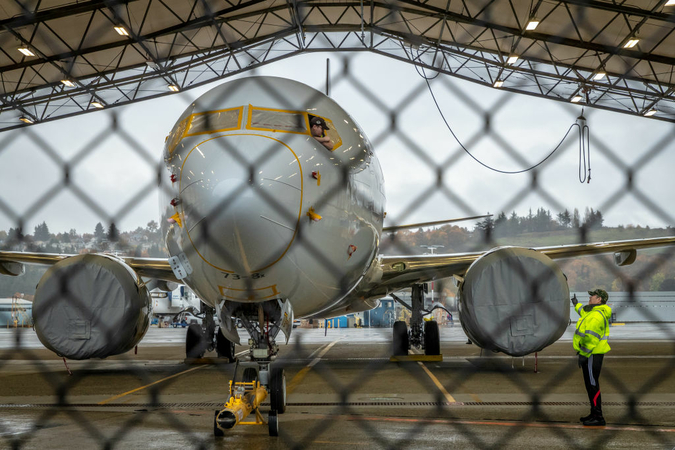 WASHINGTON - The Federal Aviation Administration said Monday that it has given preliminary approval to design changes for Boeing's 737 Max that should prevent a repeat of two crashes that killed more than 300 people in five months.

In a new report and a proposed directive to airlines, the agency said it would require the installation of a software patch that introduces several new safeguards and require that key sensors on the planes be checked before they are flown.

The public will have 45 days to comment on the proposed directive. The FAA must then analyze the feedback and respond to it, so it's unlikely the Max will be ungrounded before October. But the steps taken by the agency Monday are the clearest sign yet that the jets will soon be ready return to the skies.

"Through a thorough, transparent, and inclusive process, the FAA has preliminarily determined that Boeing's proposed changes to the 737 MAX design, flightcrew procedures and maintenance procedures effectively mitigate the airplane-related safety issues," the agency said in a report on its work so far.

In a statement, Boeing said it was continuing to work with the FAA on getting the Max safely back in the air.

"While we still have a lot of work in front of us, this is an important milestone in the certification process," the company said.

Investigators say an automated feature on the Max known as the Maneuvering Characteristics Augmentation System, or MCAS, contributed to both crashes. The system repeatedly engaged based on faulty data from a single sensor that investigators say had probably been poorly repaired. The noses of both planes were pushed down repeatedly as the pilots struggled to regain control.

After the second crash, aviation safety authorities around the world declared the jet unsafe and ordered it grounded. The FAA said Monday that since then a team of 40 agency employees have been working full-time to ensure the Max is safe to fly again.

When the Max does return to the air, a jet that was seen as crucial to Boeing's financial success and airlines' operations will come back to an aviation industry ravaged by the coronavirus pandemic.

In the United States, demand for air travel collapsed almost completely by early April and airline leaders say they're uncertain when it will return to pre-pandemic levels. That has led airlines to rethink plans for how they will use the Max in their fleets.

Boeing says it lost 373 orders for the Max in the first half of the year. And that doesn't include plans to cancel an order for almost 100 of the jet by a Norwegian carrier that was an important early customer for the aircraft.

While the directive is a significant step in the eventual ungrounding of the Max, the FAA said that several other tasks remain. A group of international pilots must assess the training requirements for the jet and a document issued as part of that process will also be submitted for formal public comment.

Once the grounding order is lifted, airlines must ensure they are complying with all the new rules for operating the plane. In addition, the FAA has said it will sign off on all newly manufactured planes before they are allowed to fly, a job that was previously delegated to Boeing.

Southwest Airlines, which has 34 Max jets, the most of any U.S. carrier, said once the FAA recertifies the plane, it would take several months to return the jets to service. In addition to meeting requirements laid out by the FAA, including updates to MCAS, the airline will have to train thousands of pilots. Airline executives said they continue to work closely with the FAA and Boeing on efforts to return the aircraft to service.

Southwest said the plane has been removed from its schedule through mid-December.

The FAA agency emphasized the thoroughness of the review, noting that the work took more than 18 months and included more than 40 engineers, inspectors, pilots, and technical support staff. In all, the effort, "represents more than 60,000 FAA hours of review, certification testing, and evaluation of pertinent documents."

The evaluation also included input from flight crews from Boeing and from pilots working at U.S. and international airlines that fly the 737 Max. The crews selected were designed to represent a cross-section of pilots expected to operate the plane once it returns to service.

The redesign work has focused on the MCAS. The system was designed to counter changes in how the jet handled because of its larger engines, which are positioned differently on its wings than older 737s.

The proposed directive calls for four fixes to the Max.

It says the software patch would require MCAS to rely on two sensors that determine the angle at which the plane is flying, rather than just one. And if the sensors disagree by a certain amount, the system would be disabled for the rest of the flight. MCAS will also be gentler in how it pushes the plane's nose down and allowed to engage only once, to avoid overwhelming pilots.

Wiring in the jets that was found not to comply with FAA rules during the safety review will also have to be changed.

The FAA estimates the changes will affect 73 planes registered in the United States and that complying with the directive will cost operators a total of $1 million. Other planes still in production will be updated before their first flights.

Michael Stumo, whose daughter Samya died on the Ethiopian flight, said he remained unconvinced that the Max was safe, calling it an old design that had been questionably updated.

"Obviously there is economic pressure to get the plane up in the air," he said. "Safety isn't first."

While the design fixes focus on MCAS, investigations since the crashes have revealed how Boeing sought to downplay the significance of the feature in an effort to ensure regulators wouldn't require existing 737 pilots undergo more intensive and expensive training to qualify to fly the plane. A reference to MCAS was stripped from a manual approved by the FAA and even an FAA warning after the first crash it was not identified by name.

Boeing and the FAA have repeatedly faced questions about the closeness of their relationship since the crashes. U.S. regulators were the last to decide to ground the jet in March 2019.

Last November, Boeing issued a statement predicting that the Max would be ready to fly again by early this year. In return regulators quickly took steps to show that they were in charge of the timeline and would hold the company accountable.

Within weeks, Boeing ousted its chief executive and said it would halt production of the Max.

Boeing's effort to minimize the importance of MCAS and the FAA's subsequent failure to properly scrutinize the system has led lawmakers to propose revamping the safety certification process for planes. Much of the work is handled by Boeing employees acting on behalf of the government, which critics say leaves them exposed to pressure to meet the corporation's financial goals rather than serving the public.