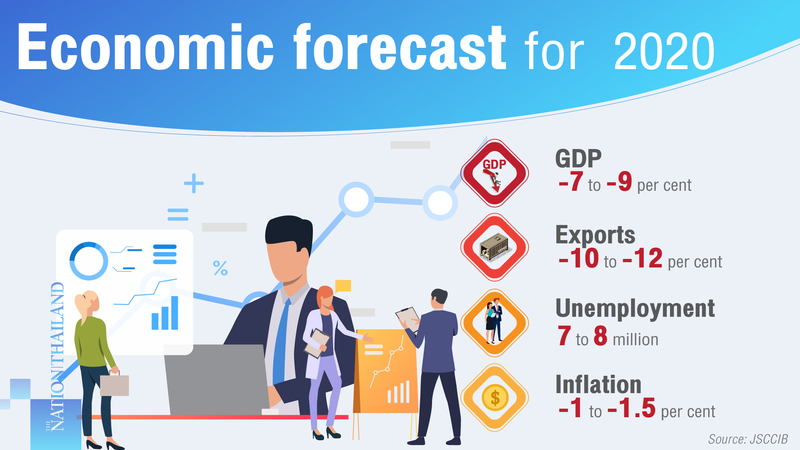 Thai businesses project a sharp drop in exports of 12 per cent this year and have revised downward their GDP forecast to a 9 per cent contraction.

Kalin Sarasin, chairman of the Thai Chamber of Commerce, announced on Wednesday that the private sector remains worried about dire economic conditions amid the Covid-19 outbreak.

All sectors – manufacturing, exports, tourism and domestic consumption – are struggling to recover from a dramatic downturn, he told press after a meeting with the Joint Standing Committee on Commerce, Industry and Banking (JSCCIB).

Exports in dollar values are expected to drop by 10 to 12 per cent, worse than the previous estimate of a 7-10 per cent fall, he said.

Due to grim economic conditions, the committee had revised down its gross domestic projection to contraction of 7 to 9 per cent from the previous 5-8 per cent shrinkage, he said.

The outlook for the rest of the year remains gloomy, he said.

Many countries have experienced a second wave of virus infections, resulting in delayed recovery of Thai exports and tourism.

“Adding to the pain, recent baht appreciation has not been positive for exports, “ Kalin lamented.

The baht passed the 31 per dollar level on Wednesday. On the same day the Bank of Thailand’s Monetary Policy Committee blamed the baht’s two-week rise on the weakening of the US currency.

The business community is also worried about rising unemployment and expects more layoffs to come, although some Thai firms had recently hired back workers, he said.

The committee projects that about 7 to 8 million workers will lose their jobs this year. A few sectors are showing signs of recovery, though, notably agri-business, food and retail.

He said government should allow foreign businesspeople to enter the country as about 10,000 were waiting to visit Thailand. The committee will coordinate with the government to arrange alternative state quarantine for them, he said.

However, with Thailand unable to reopen to foreign tourists right now, tourism revenue worth about Bt2 trillion last year is expected to take a huge hit.

Supant Mongkolsuthree, president of the Federation of Thai Industry, urged the government to accelerate the establishment of a centre to manage the post-Covid-19 economic recovery. The centre will offer a mechanism for government and the private sector to work together in order to rescue the economy, he said.

“Predee Daochai, former Thai Bankers’ Association president is expected to be appointed new Finance Minister, and we will coordinate with him very well,” he said.

Business also wants the government to speedily set up a Bt50-billion fund to aid small and medium-sized enterprises, and also cut taxes for SMEs, he added.