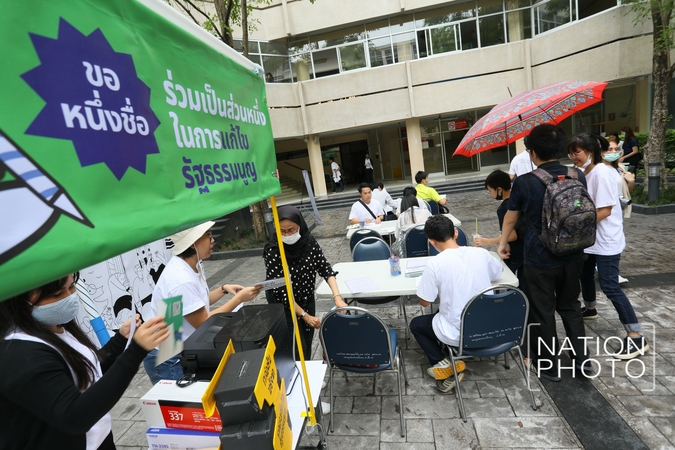 Pro-democracy activists launch a petition for 50,000 signatures needed for a motion to rewrite the Constitution at Thammasat University on Friday (August 7). Meanwhile consumers are worried about emerging political instability and the persisting impact of Covid-19.

Consumer confidence rose for a third consecutive month in July, but the index remains at a record low.

The Consumer Confidence Index moved to 50.1 in July, up from 49.2 in June, the University of the Thai Chamber of Commerce (UTCC) said.

“This is the third monthly increase in a row, but the index remains at a historic low since being launched 21 years and 10 months ago, Thanawat Polvichai, rector of UTCC and chief adviser to UTCC’s Centre for Economic and Business Forecasting, said on Friday (August 7).

Consumers lack confidence because they are worried about the threat of a second wave of virus infections, which will continue to drag down the economy and wipe away job opportunities.

On the positive side, the economy had bottomed out in the second quarter, Thanawat said.

However, consumers were delaying spending on durable goods such as cars and large household items over worry about their future income.

More political gatherings are expected after universities open next week, he said.

The Consumer Confidence Index was released on the same day that police issued a batch of arrest warrants for protest leaders. Pro-democracy groups have vowed to intensify their political activities in response to what they say is legal suppression of free speech by authorities.

Thanawat said newly appointed Finance Minister Predee Daochai and Energy Minister Supattanapong Punmeechaow are thought to have a strong understanding of the current economic situation. The government may need another stimulus injection of Bt200 billion to Bt300 billion and spend another Bt300 billion to rescue small and medium-sized enterprises (SMEs) with soft loans, he said.

Should the economy not continue improving this year, 1-2 million workers may lose their jobs, he warned.

The government could boost the jobs situation by allowing private companies to hire workers on an hourly basis, he suggested.

A survey showed consumers are expected to spend Bt9.98 billion on Mother’s Day (August 12) – down by 28 per cent on last year’s holiday.