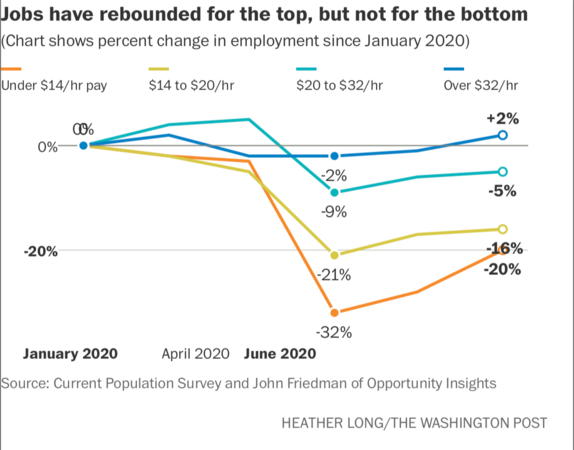 Jobs have rebounded for the top, but not for the bottom Photo by: Heather Long — The Washington Post

U.S. stocks are hovering near a record high, a stunning comeback since March that underscores the new phase the economy has entered: The wealthy have mostly recovered. The bottom half remain far from it.

This dichotomy is evident in many facets of the economy, especially in employment. Jobs are fully back for the highest wage earners, but fewer than half the jobs lost this spring have returned for those making less than $20 an hour, according to a new labor data analysis by John Friedman, an economics professor at Brown University and co-director of Opportunity Insights.

Though recessions almost always hit lower-wage workers the hardest, the pandemic is causing especially large gaps between rich and poor, and between white and minority households. It is also widening the gap between big and small businesses. Some of the largest companies, such as Nike and Best Buy, are enjoying their highest stock prices ever while many smaller businesses fight for survival.

Some economists have started to call this a "K-shaped" recovery because of the diverging prospects for the rich and poor, and they say policy failures in Washington are exacerbating the problems.

Congress has not passed another relief bill, and the bulk of the federal stimulus originally passed in March to sustain small businesses and more than 28 million people on unemployment benefits has largely expired.

As talks between Republicans and Democrats in Washington have disintegrated, the burden of supporting the economy has fallen on the Federal Reserve, which has pumped trillions of dollars into the financial system to prop up businesses and markets, fueling a 50 percent gain in the stock market since March and a surge in home and car buying. But the Fed's main tools in this situation are reducing the benchmark interest rate and buying bonds. The Fed cannot give people checks, which is why its actions have done little to help renters facing eviction or small businesses on the verge of dying.

"The stock market isn't the economy. The economy is production and jobs, and there are shortfalls in virtually every sector of the economy," Yellen said in an interview with The Washington Post.

"This pandemic is causing suffering and losses," Yellen said. "Individuals and businesses are not going to make it through this unless they get grants, and only the federal government can do that."

As much of the economy has moved to work-from-home mode, the shift has mainly benefited college-educated employees who do most of their work on computers. A Fed survey found that 63 percent of workers with college degrees could perform their jobs entirely from home, while only 20 percent of workers with high school diplomas or less could work from home.

Wealthier Americans also have seen their wealth recover - or even surge - as home values have jumped to their highest level ever (even in inflation-adjusted terms), according to the National Association of Realtors.

New analysis by Opportunity Insights of Labor Department data found employment is still 20 percent below pre-pandemic levels for workers earning under $14 an hour, and 16 percent down for those making $14 to $20 and hour. Opportunity Insights also analyzed data from the payroll processors Paychex, Intuit and Earnin and came to a similar conclusion.

"The recession is nearly over for high-wage workers, but low wage workers are no more than half-recovered," said Friedman, who led the research, which is sponsored by Harvard and Brown universities and the Bill & Melinda Gates Foundation.

The pandemic and economic crisis have hit Black and Hispanic neighborhoods the hardest. Many of these households had little savings before the pandemic, and their jobs have been slower to return as the coronavirus risk remains highest in crowded indoor spaces such as shopping malls.

The slow job rebound is leaving many minority families fearful of eviction. Nearly half of Hispanic renters and 42 percent of Black renters said they had "no confidence" or only "slight confidence" they could pay their August rent, according to a to a Census Bureau survey conducted July 16-21. On the social media site Reddit, unemployed Americans are posting harrowing accounts of their electricity being shut off, not being able to afford medication and being days from eviction.

In many parts of the country, a sense of helplessness and fatigue has set in as the virus continues to threaten people's health and the economy, and families see little action by Congress. Small-business owners are accustomed to being nimble, but this level of uncertainty makes week-to-week planning nearly impossible.

"There's always been huge disconnect between politicians and the working class. I wish they would pay attention and listen to what we actually need: more clear guidance and some more financial support," said Derek Caskey, co-owner of Sawstone Brewing Co. in Morehead, Ky.

Sawstone Brewing is one of more than 5 million businesses that received Paycheck Protection Program grants this spring. The grant the brewery received enabled Caskey to keep paying his eight workers and shift his business model to takeout orders. But the PPP money has run out and business has not fully recovered.

"What's saving us right now is outdoor seating. But when that isn't feasible, what are we going to do?" Caskey said.

The stock market is telling a different story. Thanks to a wave of optimism about a possible vaccine and an economic recovery, as well as continued support from the Fed, many investors are doing quite well. The Standard & Poor's 500-stock index is within a few points of hitting a record high. If it happens, it would be the fastest turnaround ever from a bear market, said Howard Silverblatt, a senior analyst at S&P Dow Jones Indices. The tech-heavy Nasdaq Composite Index has been in record-high territory for more than a month.

President Donald Trump has hailed the "tremendous" stock market gains as a sign of a "super" economic rebound.

"We're in the middle of a pandemic and yet we're going to be hitting records," Trump said Thursday on Fox Business channel.

It's a similar tale in housing. Families with jobs and savings are taking advantage of the lowest mortgages rates in U.S. history - below 3 percent - to buy bigger homes at bargain rates. Home purchases are up more than 20 percent, and refinancing is up nearly 50 percent from a year ago, according to the Mortgage Bankers Association.

White House economic adviser Larry Kudlow suggested Wednesday that the recovery is going so well that the economy may not need much more aid from the federal government.

"We are entering what I think is a self-sustaining economic recovery," Kudlow said on Fox Business. "A rising tide does lift all boats."

Trump's Council of Economic Advisers issued a report Thursday highlighting that poverty probably declined in the spring because of the $1,200 stimulus checks and extra unemployment funding Congress and the White House approved.

But former Trump economic adviser Gary Cohn was one of several business leaders this week stressing that the U.S. economy is far from healthy and that the consequences of Congress's inaction could sting for years. He said the stock market gains are a red flag signaling that small businesses are being crushed.

"The stock market continues to reflect big businesses increasing their market share during #COVID19. If a small business closes, a larger business fills the void. We need to contemplate what this means for Main Street USA going forward. Is this really the future we want?" Cohn tweeted.

Janice Tabangcura is one of millions of Americans furloughed and waiting to be called back to work. Tabangcura has been a line cook at Roy's Waikiki Restaurant in Hawaii for six years. The normally vibrant Honolulu neighborhood is empty, and no one knows when that will change.

"It's creepy. Waikiki is usually so busy. We call it Hawaii's little New York. But now you see five people on the street," Tabangcura said. "They keep extending the quarantine here. It's dampening our spirits. We thought tourism would pick up this month, but it hasn't."

Tabangcura, 30, has waited weeks for an unemployment check, which still hasn't come. To make some money and stay hopeful, she's started a baking business, delivering "Bento boxes" of cookies and pastries.

For many of the unemployed, the downturn is turning out to be far longer than they had anticipated. Nearly 80 percent of furloughed or laid-off workers thought they would be rehired, a Washington Post-Ipsos poll conducted April 27-May 4 found. Yet so far, only 42 percent of jobs have returned, Labor Department data shows.

"This has been a very clear K-shaped recovery," says Peter Atwater, an adjunct lecturer in economics at the College of William & Mary. "The biggest and wealthiest have been on a clear path toward recovery. Meanwhile, for most small business and those worst off, things have only become worse. The contrast is piercing: One group feels better than ever while the other borders on hopelessness."

One of the key debates between Republicans and Democrats is about how long the U.S. economic recovery will take. Republicans point to the fact that the economy added more jobs than expected in May, June and July as a sign that a comeback is taking hold. They also highlight the swift bounce-back in home, car and truck sales. Some auto dealerships have had their best July ever, and gasoline sales have mostly rebounded.

Democrats point out that the unemployment rate is 10.2 percent - higher than at any point during the Great Recession, and that millions are unable to pay rent. Census data shows that more than half of Americans said they felt depressed or hopeless in July, and 20 percent of Hispanic households with children and nearly a quarter of Black households with children say they don't have enough to eat.

One of the most telling indicators about the economy is consumer spending. It's still down about 8 percent from pre-pandemic levels overall, but it was down only 2 percent among low-income households in July. This is largely because of the stimulus checks that went to working- and middle-class families this spring and the extra $600 a week in unemployment aid Congress sent out in April, May, June and July.

Now that those funds for struggling families have stopped, many economists predict a rapid rise in evictions, bankruptcies and vehicle repossessions - as well as a hit to the overall economy as spending slows.

Trump attempted to take action over the weekend to provide more aid to struggling Americans, but it was limited. Even if Trump's executive moves survive legal challenges, they would, at best, pump less than $100 billion into the economy, JPMorgan notes. That's far less than the $1 trillion or more that many on Wall Street and Main Street are counting on.

"The consensus is that a deal is necessary if the U.S. is to avoid economic calamity," JPMorgan wrote in a morning note.