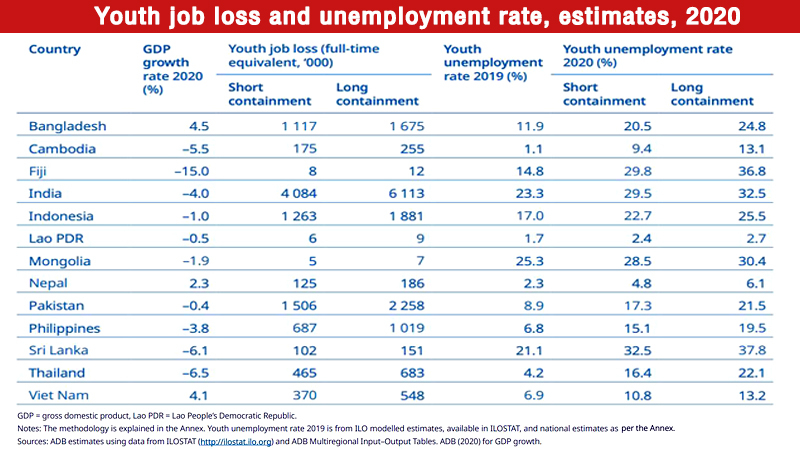 The number of unemployed youth in Thailand will double this year, while 220 million young workers in Asia will be vulnerable to labour market disruption caused by Covid-19, the Asian Development Bank said.

The Covid-19 pandemic has triggered a massive disruption of labour markets, having a disproportionate impact on the employment of young people, said ADB report titled “Tackling the Covid-19 youth employment crisis in Asia and the Pacific”.

With lockdowns and travel restrictions in place, demand has slumped and many businesses have been forced to close or cut back on operations, having a serious impact on workers. Nearly 220 million people aged 15 to 24 in the region are particularly vulnerable given that they hold insecure, informal, part-time jobs in sectors that have especially been hit hard.

Given their relative lack of experience, young people face higher rates of unemployment than people above the age of 25 regardless of the business cycle. Young people are also more likely than adults to work in less secure, lower-wage jobs usually with limited legal rights, social protection and representation.

The Covid-19 crisis brings the vulnerabilities of youth labour markets to the fore but with the further complication of disrupted education and training pathways. Young people will be hit harder than adults in the immediate crisis and also bear higher longer-term economic and social costs. Pre-existing vulnerabilities of youth in the labour market will be exacerbated, with negative consequences for intergenerational poverty and inequality.

The crisis negatively impacts the prospects for youth through three channels: job disruptions from reduced working hours and layoffs; disruption in education and training as they try to complete studies; and difficulties transitioning from school to work and moving between jobs.

The crisis will affect young people differently depending on their situation in the labour market. The scale of the impact will depend on the length of the crisis, the choices governments make for socioeconomic recovery and the capacity of institutions to implement effective measures.

Youth in the Asia-Pacific region faced a challenging labour market situation before the crisis. The regional youth unemployment rate was 13.8 per cent in 2019 compared with 3 per cent for adults and the global youth unemployment rate was 13.6 per cent. More than 160 million youth (24 per cent of the population) were not in employment, education or training in 2019, and the region’s rates have been rising primarily as a result of the exclusion of young women who face an excessive burden of unpaid household and care work.

Four in five young workers in the region were engaged in informal employment – a higher share than among adults – and one in four young workers was living in conditions of extreme or moderate poverty.

At the onset of the crisis, nearly half of young workers in the region were employed in the four sectors destined to be hardest hit by the recession. These sectors – wholesale and retail trade and repair, manufacturing, rental and business services, and accommodation and food services – employed nearly half of all young people (more than 100 million) working in Asia-Pacific at the onset of the crisis. Young women are overrepresented in three of the four highly impacted sectors, particularly accommodation and food services.

The vulnerability of youth in labour markets was already visible in the first half of this year as the Covid-19 crisis unfolded. Youth unemployment rates jumped in the first quarter of 2020 from the last quarter of 2019 in all economies for which data is available.

Compared with the first quarter of 2019, youth unemployment rate increased in six of nine economies that have quarterly data available: Australia, Indonesia, Japan, Malaysia, and Vietnam, as well as in Hong Kong which showed the largest increase of 3 percentage points.

All economies that experienced increases showed sharper jumps in youth rates than in adult rates.

The reduction in working hours is unprecedented. Working hours across the region dropped 7.1 per cent in the first quarter of 2020 from the fourth quarter 2019. The loss of working hours rose to 13.5 per cent in the second quarter of 2020. While the regional figure is not disaggregated by age, evidence from two countries – South Korea and Thailand – showed young workers experienced a significantly larger loss of hours than adults.

Job loss among youth will continue throughout 2020 and could result in youth unemployment rates doubling. Between 10 and 15 million youth jobs (full-time equivalent) may be lost across 13 Asia-Pacific countries 2020. These estimates are based on the expected fall in output and consequent decrease in labour demand for the year relative to a non-Covid-19 scenario. The estimates include large countries, such as India and Indonesia, as well as small ones such as Fiji and Nepal.

Policy measures are urgently required to tackle the youth employment crisis in Asia-Pacific and recover lost ground on inclusive growth and sustainable development. Experience from past crises suggests that young people who try to enter the working world during a slowdown face long-term impacts on employment pathways, wages and productivity.

To minimise future “scarring” of the current generation, governments are called upon to urgently adopt and implement large-scale and targeted measures to stimulate the economy and youth employment, balancing the inclusion of youth in wider labour market and economic recovery measures with youth-targeted interventions to maximise efficiency in the allocation of resources.

Support measures, many of which should be directed at enterprises in the hardest-hit sectors where youth job losses are concentrated, to be prioritised include:

• Increasing funds for upskilling and reskilling, especially in growth sectors;

• Investing in digital inclusion for equitable access to education, training and entrepreneurship; and