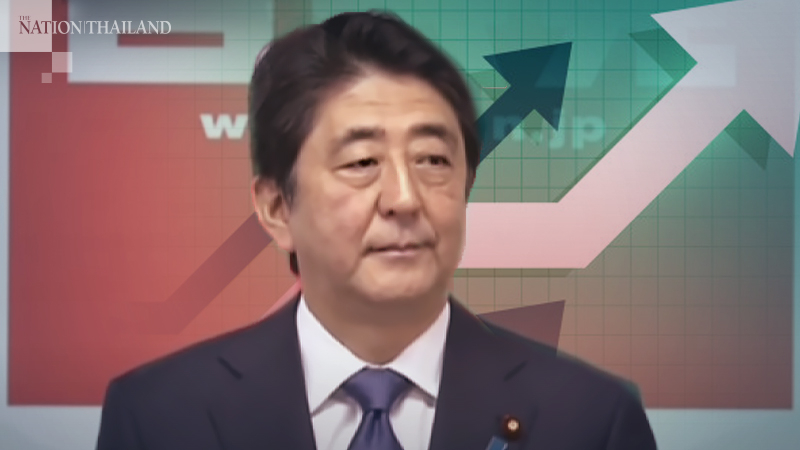 TOKYO - The economic policies of Prime Minister Shinzo Abe, dubbed Abenomics, turned around weakening stock prices and reversed a strong yen to revitalize an economy stuck in a slump.

Abe also focused on navigating a way out of a deflationary period with ongoing drops in prices. Yet many challenges remain given that the spread of the novel coronavirus has resulted in an economy sharply deteriorated.

"We challenged 20 years of deflation with the three arrows of [Abenomics,] which created more than 4 million jobs," Abe said at a press conference Friday when he announced his resignation. "We have taken a big step toward work style reformation and a society enabling the dynamic participation of all citizens."

Under the Abenomics policies, he envisioned a scenario of transitioning to economic growth led by the private sector while propping up the economy with government fiscal stimulus.

At the World Economic Forum annual meeting in Davos in January 2014, he stressed his commitment to deregulation, saying, "No vested interests will remain immune from my drill."

Realizing that sustainable growth would be difficult to achieve should individuals and businesses refrain from spending capital, the prime minister became very conscious of "distribution."

As the government took the initiative of encouraging management to increase pay in government-led spring labor negotiations, an increasing number of companies also implemented base salary increases.

The government's work style reform and other measures have attracted older people and women to the labor market, and the unemployment rate - which had been at more than 4% at the start of the Abe administration - has fallen to the 2% level.

The economic expansion that started in December 2012 lasted for 71 months until October 2018.

The Nikkei Stock Average of 225 selected issues, which saw positive results stemming from Abenomics policies, more than doubled from ¥10,230 when the second Abe administration began.

Real gross domestic product, which was about ¥498 trillion on an annualized basis in the October-December 2012 period, expanded to about ¥539 trillion by the July to September 2019 period.

Nevertheless, a widespread belief held among government officials is that Japanese companies did not gain very much in strength and the government's growth strategies have not reached satisfactory results.

Japanese companies are launching new products and services at a slower pace than their Western counterparts, and they remain cautious about investing in R&D and equipment.

Fiscal restructuring has also stalled due to huge costs. As a result of the economic measures to deal with the novel coronavirus, the general account spend for fiscal 2020 exceeded ¥160 trillion for the second supplementary budget, and the outstanding balance of government bonds is expected to grow to about ¥1,097 trillion.

The government's target of achieving a surplus in the primary balance of central and local governments in fiscal 2025 is expected to be easier said than done.

The government is urged to rethink its fundamental strategy for fiscal consolidation, observers said.