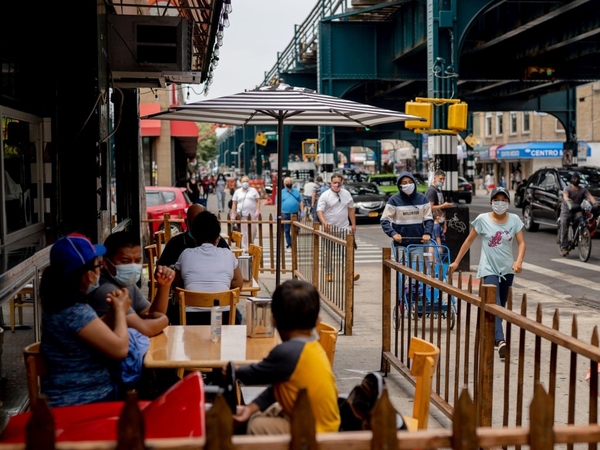 Pedestrians pass in front of customers sitting outside at a restaurant in in the Queens borough of New York on June 27, 2020. MUST CREDIT: Bloomberg photo by Amir Hamja. Photo by: Amir Hamja — Bloomberg Location: New York, United States

The number of Americans applying for jobless benefits resumed its decline, signaling a gradual improvement in the battered labor market.

Jobless claims in regular state programs decreased by 33,000 to 860,000 in the week ended Sept. 12, which coincides with the reference period for the government's monthly jobs report, according to Labor Department figures released Thursday. Continuing claims, the total number of Americans on state benefit rolls, fell by almost 1 million, to 12.6 million, in the week ended Sept. 5.

Economists expected initial claims of 850,000 and continuing claims of 13 million, according to median estimates in a Bloomberg survey.

The decline in the number of Americans seeking financial help after losing work is a welcome sign that the economic rebound is still grinding forward despite a struggle to contain the coronavirus. At the same time, overall claims remain historically high, and the continuing stalemate over a new round of federal stimulus is squeezing millions of people after supplemental benefits expired in July and another temporary program started to run out of funds.

Federal Reserve Chairman Jerome Powell said Wednesday that while the central bank welcomes the drop in unemployment over the last four months, the jobless rate remains elevated at 8.4% and "we will not lose sight of the millions of Americans who remain out of work." He spoke after the central bank signaled it would keep interest rates near zero for at least three more years.

Another positive sign in Thursday's report: reported filings in a federal program called Pandemic Unemployment Assistance decreased for the first time in five weeks, to about 659,000 from 868,000, according to unadjusted figures. This program is available for those not usually covered in regular state programs, including the self-employed and gig workers.