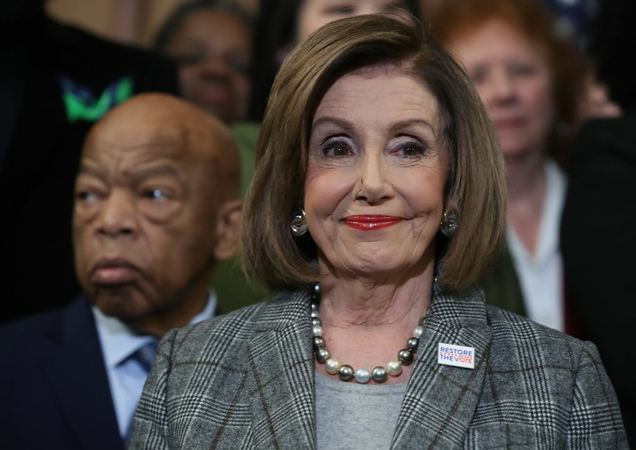 WASHINGTON - House Democrats were starting to squirm earlier this week, fretting that House Speaker Nancy Pelosi's risky gamble in economic relief talks would backfire and they would go into the November elections without any new stimulus package.

But President Donald Trump scrambled that calculus Wednesday when he cast aside the Republican negotiation position and told his party to embrace a much larger spending bill, including stimulus checks, to give Americans more money. In short, he moved closer to Pelosi's position after a month-long showdown.

Now the California Democrat faces a crucial decision: Does she try to negotiate an agreement with a White House that suddenly seems ready to deal, or continue to hold her ground and make Trump, facing his own election woes, swallow the sweeping $2.2 trillion bill she has long demanded.

Holding her ground with Trump may be the easy part. It also means facing down an insurrection from the very members she's long tried hardest to protect, the swing-seat Democrats whose victories in GOP-leaning districts returned Democrats to the House majority last year.

These centrist Democrats, fearful of constituent blowback, are pushing Pelosi to return to the negotiating table and strike a deal with Trump on an expansive relief package - even if she can't get the $2.2 trillion she wants. Congress has already approved roughly $3 trillion in emergency spending in response to the coronavirus pandemic, and Pelosi has called for much more. The latest Republican offer, the one Trump dismissed, was closer to $300 billion.

There's a palpable fear among Democrats that voters will blame them on Election Day should they appear to be putting their own reelections ahead of what's good for Americans.

"We should have that same level of urgency that we had when we were dealing with this in March and April," said Rep. Andy Kim, who flipped a GOP district in New Jersey last election. "And I don't really get that sense that that type of just timeliness and that urgency is underlying what everybody here is feeling right now."

The infighting has created an odd situation whereby Pelosi's centrist members have applauded the position of a president they voted to impeach just months ago. Some of these moderates offered kudos for Trump on Wednesday after he praised a $1.5 billion bipartisan coronavirus deal put forward by the Problem Solvers Caucus, a group of 50 pragmatic-minded Republicans and Democrats in the House -- and tweeted that his own party should consider "much higher numbers," signaling his openness to a deal.

"The tweet that Trump just sent out saying that he was open to more resources for the American people is a good thing because they need more resources," said Blue Dog Coalition leader Stephanie Murphy, D-Fla. "We can argue about what the specifics of a plan should look like, but the important thing is that we get back to the negotiating table and hammer out a deal that can be passed into law."

Pelosi, meanwhile, had dismissed the Problem Solvers pitch, having her top policy chairmen put out a statement saying the proposal "falls short" and "leaves too many needs unmet."

The diss by senior House Democrats infuriated many frontlines eager to work with the GOP. Rep. Max Rose, D-N.Y., a vulnerable New York Democrat from a district Trump carried in 2016, called their statement "laughable," "idiotic" and "representative of why everyone hates this place."

"That does not speak to what they should be doing as party leaders," Rose said. "Sit down. Work something out. We have a bipartisan road map right here. Then you put the ball in [Senate Majority Leader] Mitch McConnell's' court."

Republicans have sought to exploit the Democrats' divisions.

"I think knowing her well, she cares more about politics than she does about the people," House Minority Leader Kevin McCarthy, R-Calif,) said Thursday. "And that's unfortunate. That's why she should not be fit for that job."

But underscoring the complex calculations at play for everyone involved, McCarthy is simultaneously quelling a rebellion of his own, one that could undercut his criticism of Pelosi.

A group of conservative House Republicans have begun discussing trying to use an obscure House procedure to try to force a vote to boot Pelosi from the speakership, known as "a motion to vacate the chair," first reported by Politico. The action, they believe, would require moderate Democrats to decide whether they want Pelosi as speaker, putting them on the spot at a moment of internal tension.

McCarthy has made clear his concerns that it would only backfire by giving vulnerable Democrats a chance to separate themselves from Pelosi just ahead of an election where she's unpopular in some of the GOP-leaning districts they represent.

"I'm in favor of defeating Nancy Pelosi," McCarthy said in an interview Wednesday night with conservative host Laura Ingraham. "The real challenge would be we're four weeks away from election. These Democrats could vote against Nancy Pelosi, use it in their campaigns to say they're not with her even though they vote with her 95 percent of the time."

At the same time such a move by conservative Republicans would almost certainly make Pelosi stronger, unifying Democrats behind her and pushing their own internal skirmish to the back burner. Despite her current predicament with moderates, Pelosi, many Democrats believe, is stronger than ever as speaker. Notably, many moderates upset with Pelosi have refused to call her out by name - and make it a point criticize both GOP and Democratic leaders for the coronavirus talk standoff.

Pelosi has served as speaker during two different stints, first from 2007 until 2011 and then retaking the gavel in 2019. She is expected to continue in her role next year if Democrats retain control the House.

Privately, some House Democrats eager to return home in early October with something concrete in hand have echoed GOP speculation that Pelosi and Schumer don't want to negotiate because a deal could help McConnell, R-Ky., keep the Senate, giving cover to his vulnerable GOP members in tough reelections.

Pelosi, for her part, flatly denies that politics has anything to do with her negotiating tactics. The GOP's proposals thus far, she has argued for months, would do little to stem the hardship faced by Americans struggling amid the pandemic.

Last week, the Senate GOP tried to advance a relief package that was a mere fraction of what House Democrats have demanded, ringing in at just around $300 billion in new spending. Senate Democrats blocked the bill, which excluded any new stimulus checks and did not include money for rental or nutrition assistance that Pelosi has demanded.

Still, the game of chicken between Pelosi and moderate Democrats is striking. While liberal in her own beliefs, the speaker has routinely put the needs of her so-called Majority Makers over the desires of the left. For two years she has eschewed demands for a Medicare for All vote that centrist worried would repel swing voters in their GOP-leaning districts. She has kept the left's beloved Green New Deal at arm's length too, as moderates fret about blowback.

For the first nine months of 2019, Pelosi also stood firm against liberals' calls to impeach the president, even after a majority of her caucus demanded his ouster - all in the name of her frontliners. And even after the Ukraine scandal forced her hand, she took the advice of her moderate members over some of her own investigative chairmen, including calls to keep articles narrow and focused on Trump's bid to pressure the nation to investigate his political rival.

Yet on coronavirus, the gap between the frontlines and Pelosi has only widened in recent days, as her moderate members call to reopen talk and pass legislation closer-aligned to what Republicans would accept.

The matter will come to a head in a matter of days. Congress is set to leave town the first week of October and not return until after the election. Pelosi, in a nod to the pressure from moderates, has vowed that the House won't adjourn until they pass something addressing he virus. But the promise was vague and perhaps a bit misleading: The House can technically stay in session even if members return home to their districts, on standby to come back to Washington to vote if needed - and Pelosi hasn't committed to making members physically stay in town.

Some moderates hope Pelosi will come around and make a deal -- particular now that the Problem Solvers Caucus has laid out a bipartisan blueprint.

"It seems like all sides are willing to go back to the table to get something done," said Rep. Josh Gottheimer, D-N.J., the leader of the Problem Solvers Caucus who helped negotiate their recent proposal. "It's unconscionable to go home before the election without helping families and small businesses, and I think there's a deep recognition that now, at this point, that it's simply impossible to go home without getting something done."

Some senior Democrats agree House Democrats' current position is untenable. Pelosi's No. 2, House Majority Leader Steny Hoyer, D-Md., has already made clear that he is sympathetic to the frontliners' concerns. Those close to him believe he would be fine with having a vote on another package before they leave town, even if it's smaller than the plan Pelosi wants.

But the speaker has been known for her iron grip on her caucus -- and despite the standoff with her frontliners, that has not diminished.

In a news conference on Thursday, Pelosi once again touted House Democrats' $3.4 trillion coronavirus relief package that passed the House in May, chiding the president for not doing enough to save the hundreds of thousands of American lives that have been lost amid the pandemic.

"It didn't have to be that way," she said solemnly - a sign blaring the name of the House's coronavirus relief package -- "Heroes Act" -- in bright blue and white lettering before the podium.

When asked about moderates wanting her to put a new, perhaps smaller proposal on the floor, Pelosi bristled, arguing that "they didn't say it to me."

"I'm very proud of the dynamism in our caucus," she said of the lively debate.

Some Democrats are happy with Pelosi's positioning. Trump's insistence that he is willing to increase the price of the package, they argue, is proof that her tactics are having results.

"It sounds like it's working pretty well," said Rep. Mary Gay Scanlon, D-Pa., praising the speaker for her tough line.

But telling that to some Democrats facing difficult reelections is another matter entirely.

"We're back home and every place I go people are like, 'what's the status of the new covid deal? Like where is it?'" said Rep. Elissa Slotkin, D-Mich., who faces a tough reelection in a Trump-carried district. "And that's business owners wanting another [small business aid] law and that's our food banks. That's our teachers. I mean, it's everybody."