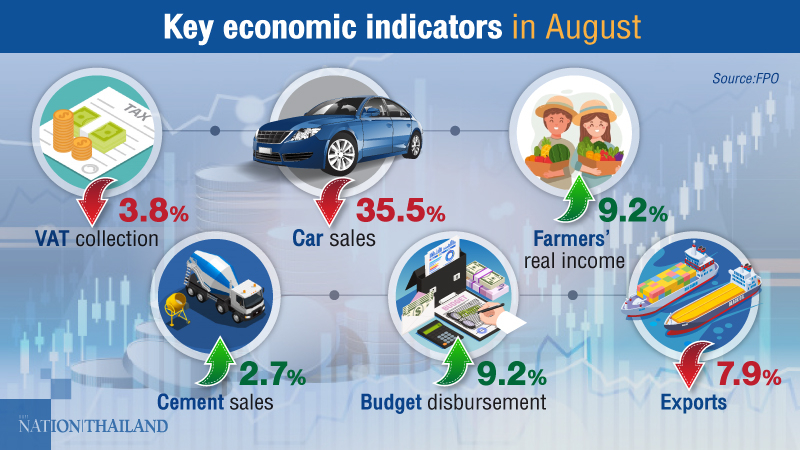 Economic indicators for August show significant improvement from July but suggest the economy is still contracting, according to the Finance Ministry.

Releasing its monthly economic report on Monday, the ministry’s Fiscal Policy Office predicted the economic situation would get better in the third quarter after a sharp contraction of 12.2 per cent in the second quarter.

Reopening the country to tourists would also boost the recovery, said fiscal policy adviser Wuttipong Jittungsakul, referring to a plan to allow foreign travellers back into Thailand next month. Before the Covid-19 travel ban, Thailand welcomed 6.7 million foreign tourists this year.

Farmers’ income increased for the second month in a row, by 9.2 per cent, up from 3.8 per cent in July. The consumer confidence index rose for the fourth consecutive month, to 51. Effective control of Covid-19, relaxation of restrictions, and implementation of aid packages had helped boost consumer spending. The fiscal Policy Office predicted the economic situation in the third quarter (July-September) would be better than the second quarter, he said.

Private investment also improved slightly, with imports of capital goods and commercial cars increasing 1.5 per cent and 13.1 per cent respectively from July. They dropped year-on-year, but at a decelerating rate of 11.5 and 0.5 per cent.

Exports in dollar terms contracted 7.9 per cent in August, better than the 11.4 per cent contraction in July.

Budget disbursement rose 9.2 per cent year on year in August with a monthly increase of 3.3 per cent.