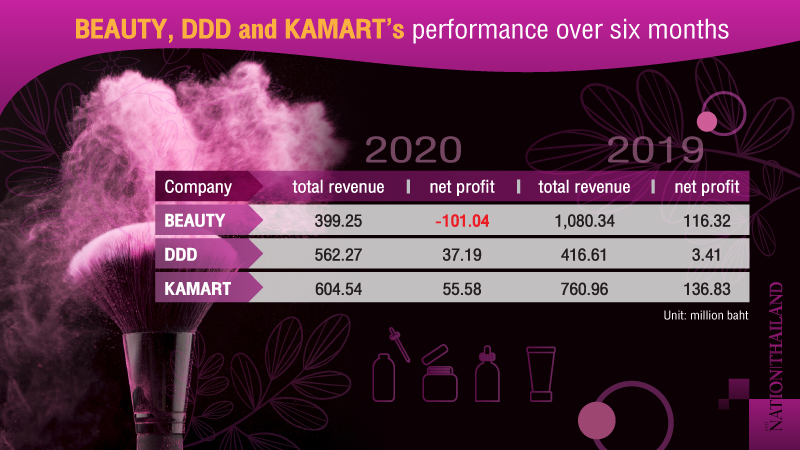 Shares in the cosmetics sector rose after dropping by 30 per cent year on year, but experts believe the boost is short-term from the news of the country reopening.

BEAUTY's net profit in the first six months of the year fell to Bt101.04 million from Bt116.32 billion in the same period of the previous year.

KAMART's net profit over six months was Bt55.58 million, down 59.4 per cent year on year, while DDD's net profit was Bt37.19 billion after facing losses for four consecutive quarters.

Tareetip Wongsaengpaiboon, senior president at Kasikorn Securities, said the share price of the three companies rose in response to the news of the government's move to allow tourists to enter the country.

She explained that DDD and BEAUTY get more revenue from tourists than KAMART, but these companies still lack positive sentiment to boost their performance although they have adjusted their business strategy. So, it is necessary to see the number of tourists coming in after reopening the country.

"These companies need stronger positive sentiment, so we cannot advise investors during this time," she said.

Recently, the Centre for Covid-19 Situation Administration agreed to allow six more groups of tourists to enter Thailand. Separately, an AirAsia flight carrying a group of 150 tourists from China’s city of Guangzhou will land in Phuket on October 8, while a Thai Smile Airways flight carrying another group of 126 flies to Bangkok on October 25.

On November 1, 120 tourists from Scandinavia and other European countries will arrive in Bangkok on a Thai Airways flight. These tourists will spend their first 14 days at alternative state quarantine sites in Chonburi, Buri Ram and Phuket.

Napon Jaisan, an asset analyst at Bualuang Securities, said if Bt23 million dividends from financial assets and Bt86 million net profit from fair value measurement are excluded, DDD would show a Bt44-million loss in the second quarter of this year compared to a Bt23-million profit in the same period of the previous year.

"Although DDD's sales in the second quarter of this year were affected by the Covid-19 outbreak, Kuron sales were not affected by the said crisis, so it is considered a good decision that DDD acquired Kuron because it helped diversify the company's risks," he said.

"We expect DDD's second-quarter performance to be its worst this year, but we advise investors to wait and watch because it is necessary to see a recovery in cosmetics demand and the tourism sector after reopening the country."

An analyst at Tisco Securities expected BEAUTY to report Bt68 million in losses this year before rebounding with a Bt122-million net profit next year, adding that more than 28 per cent of the company's revenue came from foreign countries, especially China.