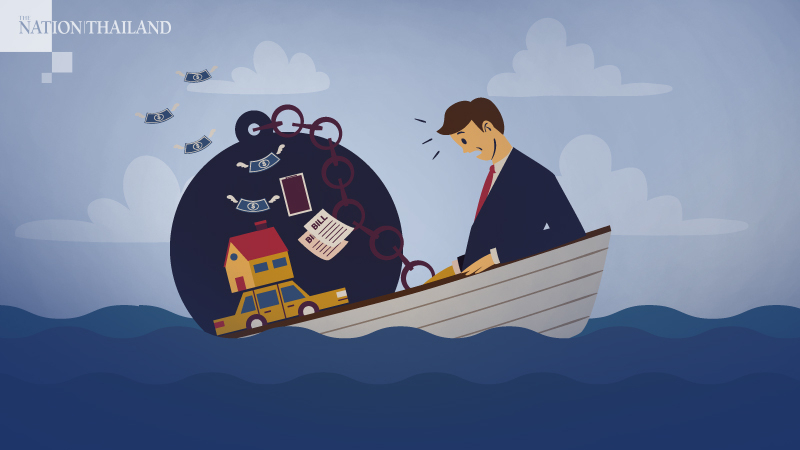 Thai household debt rose to 80.1 per cent of gross domestic product in the first quarter of this year, up from 50.4 per cent in 2009, according to a study.

The high debt has adversely impacted economic growth while the Covid-19 outbreak has made it more challenging to solve the household debt problem and they have the potential to delay economic recovery, said the study by researchers at Bank of Thailand (BOT)’s Puey Ungphakorn Institute for Economic Research.

Over the past 10 years, more people are bearing a debt burden and the size of the debt has increased from Bt70,000 to Bt128,000 each (median value), according to the study released at BOT Symposium 2020 on Monday.

The share of bad debt/non-performing loans has decreased from 22 per cent to 16 per cent, which is considered still high. The median value of bad debt was Bt 65,000, up from Bt35,000 previously.

The study also found it astonishing that debtors who had started borrowing money at a young age continued to bear the burden even after retirement.

Researchers believe the first-car scheme launched in 2011 was a major factor in the rising debt of urban residents. Farm subsidies, such as debt moratorium to support farmers also resulted in rising debt among people upcountry.

This suggested that a moratorium could not solve the debt issue.

The Covid-19 outbreak has worsened the situation and many are unable to service their debt.

Of the large number of people who had applied for financial aid under the central bank’s scheme between April and June, 71 per cent asked for temporary suspension of debt payment, 26 per cent demanded reduction of debt instalments and 3 per cent applied for debt restructuring as they were no longer able to repay the debt.

Those who applied for debt relief were concentrated in the lower-northeastern region covering Nakhon Ratchasima, Buri Ram, Surin, Si Sa Ket and Ubon Ratchathani provinces. About 40 to 60 per cent of applicants were personal loan borrowers followed by mortgages, while most of those in Bangkok and vicinity provinces, the South and upper North applied for restructuring of their bad debts or non-performing loans (NPLs).

Non-bank lenders represent a large share of debtors asking for debt relief. Most of the debts are hire-purchase loans. Should the coronavirus linger on, non-bank lenders would have high risk stemming from debt default, the researchers said. Each has debt of about Bt500,000.

In July when some financial aid expired, the study found that 2.1 million debtors exited the scheme, and they represented about 36.7 per cent of total debtors who received debt relief.

The study called for urgent actions to solve the rising household debt.

One proposal is to amend the bankruptcy law that will allow debtors to file for court protection and then they can start their lives anew after three years of the debt payment process, in the same manner as corporates currently applying for bankruptcy protection.

Reopening the country to foreign tourists would also boost economic activities, which could help many debtors as rising income would increase their debt payment capacity, the study said. But it will come with the risk of a new wave of virus infections, so the reopening for tourism must be managed carefully, the study said.

Concerned parties may need to apply different solutions for debtors in different regions, the study suggested.

The study is based on information collected from the National Credit Bureau Co, whose data base covers 23.1 million retail borrowers with combined debt of Bt 11.9 trillion, representing 88.3 per cent of the total household debt, and data from Bank for Agriculture and Agricultural Cooperatives.