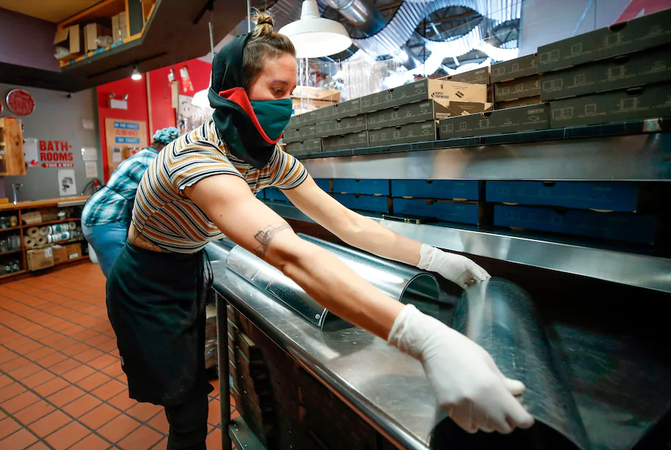 WASHINGTON - A cascade of new layoffs announced this week is putting pressure on an already strained labor market as numerous large companies have said they plan to shed thousands of workers in the final months of 2020.

The Labor Department on Thursday painted a grim picture of the jobs market even before these new layoffs were reported: 837,000 initial claims for unemployment insurance were processed last week. That's down from a peak in late March and April, but it is still higher than any other period before the coronavirus pandemic.

Another 650,000 people had new claims processed last week for Pandemic Unemployment Assistance (PUA), the program for self-employed and gig workers, up slightly from 630,000 the week before.

The total number of people claiming unemployment insurance ticked up slightly, to 26.5 million for the week ending Sept. 12.

The unemployment rate was 3.5% in February and jumped to nearly 15% in April as U.S. employers laid off more than 20 million people due to the coronavirus pandemic. Employers have added back about half the lost jobs since, but many Americans remain unemployed. President Donald Trump has said the economy is roaring back to life, but new layoff announcements show how some companies are struggling to adjust to the uneven economic recovery, particularly as some industries remain weak.

Several companies in recent days have announced sizable corporate layoffs, including 28,000 people at Disney from its theme park division, 3,800 people at the insurance company Allstate, and tens of thousands of additional furloughs at American Airlines and United Airlines. Numerous industries are under severe strain. Continental, the German tire company, announced plans to cut as many as 30,000 jobs worldwide, and Marathon Petroleum has begun a new round of layoffs.

"There is clearly a stalling out in the improvement in the domestic labor force," said Joseph Brusuelas, the chief economist at RSM. "In particular, the rise in the number of persons on unemployment insurance and the increase in the number of people on PUA need to be monitored, because that signals we're likely to have a sustained issue over the next couple of years inside the labor market, particularly pertaining to transportation, leisure, hospitality in general, aviation and hotels in particular."

There are several reasons for the new rounds of layoffs.

Americans have not resumed traveling at the pace they did before the pandemic, putting a lot of pressure on airlines and companies that rely on tourism and visitors. Also, emergency government aid programs for businesses and households have mostly expired, leaving Americans with less money for spending.

U.S. employers announced another 118,000 job cuts in August, according to the employment firm Challenger, Gray & Christmas, bringing the yearly total to more than 2 million - the highest ever recorded by the firm.

Economists have started talking less about returning to a pre-pandemic normal and more about what the new economy will look like.

"Clearly the covid shocks have led to an economy in transition," Chester Spatt, an economist at Carnegie Mellon University, said, referring to covid-19, the illness caused by the novel coronavirus. "Even once we get back to full employment, the jobs aren't going to be the same as the old jobs. People talk a lot about when we return to normal, but I don't think normal is defined as the way we did things before."

The White House and congressional Democrats are trying to negotiate another economic relief package, with talks continuing Thursday. Both sides say they want more small-business aid, joblessness benefits and stimulus checks, but they remain far apart on other issues. A deal does not appear imminent.