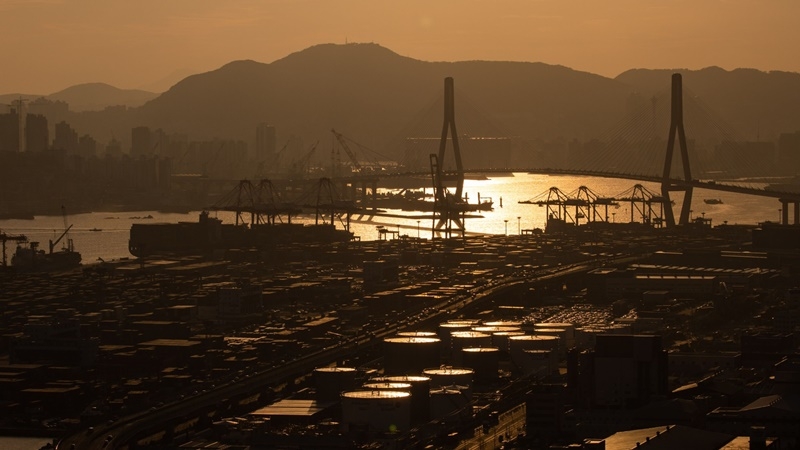 Vehicles drive through the road as shipping containers sit at the Busan Port Terminal, left, and oil tankers stand in Busan, South Korea, on Oct. 13, 2020. MUST CREDIT: Bloomberg photo by SeongJoon Cho.

Oil rose for a second day amid a weaker dollar and signs of improving demand in China and India.

Crude futures gained as much as 2.3% in New York as the Bloomberg Dollar Spot Index slipped as much as 0.3%, raising the appeal for commodities priced in the currency. Meanwhile, refinery activity in Asia is signaling a bright spot for demand recovery. One Chinese mega-refiner is snapping up barrels of Middle Eastern crude, while India's refiners have cranked up processing to meet higher consumption during a festive period.

"A weaker U.S. dollar tends to boost all dollar-denominated commodities and vice versa," said Carsten Fritsch, an analyst at Commerzbank. "This applies in particular to gold, but also to other commodities like crude oil."

Signs of a demand boost in Asia is helping lift the overall outlook for oil consumption, which continues to struggle to return to normal due to the coronavirus pandemic. At the same time, the structure of the market is signaling strength ahead. The spread between Brent's nearest contracts is at its narrowest in six weeks, while the contract's six-month spread is at the strongest since late July.

Rongsheng Petrochemical Co.'s Singapore unit has purchased at least 7 million barrels in the spot market so far this month for delivery in December and January, according to traders who asked not to be identified because the information is private. The company is buying up crude to feed a trial run operation of its expanded refinery in Zhejiang province this quarter.

The oil purchase from Rongsheng's Singapore unit is "giving a ray of hope for the market," said John Kilduff, a partner at Again Capital. "We're seeing demand pick up in the face of constrained supply, helping to push up prices a bit."

Traders' attention has also turned to plans by OPEC+ to raise supply in 2021 in line with its agreement earlier this year. While some producers inside the group are said to have doubts, the United Arab Emirates and now Russia have said that, for the time being, the group intends to proceed as scheduled. Saudi Crown Prince Mohammed Bin Salman and Russian President Vladimir Putin on Tuesday urged the alliance to comply with agreed cuts as virus infections rise again.

Meanwhile, U.S. crude inventories are expected to have declined by 2.1 million barrels last week, according to the median estimate in a survey of Bloomberg analysts ahead of government data released on Thursday. The industry-funded American Petroleum Institute will report its supply tally later Wednesday.

The outlook for demand from refineries remains precarious, with refining margins severely depressed for this time of year. The so-called crack for combined gasoline and diesel against West Texas Intermediate futures falling toward $9 a barrel. Refineries typically need the spread to be more than $10 a barrel to make a profit processing crude oil.

"They're minimizing jet fuel, maximizing diesel," said Stewart Glickman, energy equity analyst at CFRA Research. "There's only so much you can do with those kinds of levers. The only other lever they have is to start shutting in runs and producing even less."