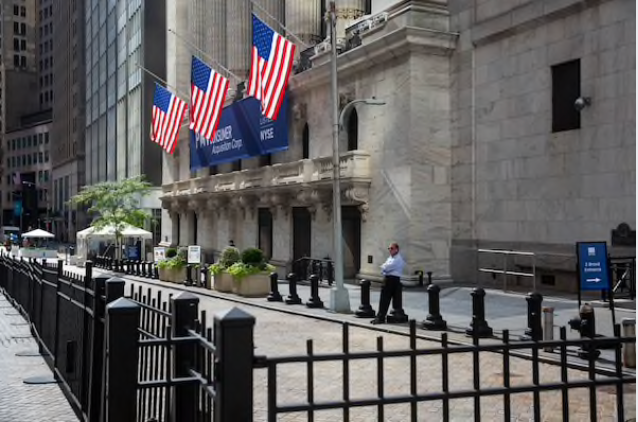 A person rests on a post in front of the New York Stock Exchange in New York on Oct. 2, 2020. MUST CREDIT: Bloomberg photo by Michael Nagle.

Stocks tumbled in the U.S. and Europe as rising coronavirus infections and tougher lockdowns added to worries about the economic hit from the pandemic.

The S&P 500 Index fell 3.5%, the biggest drop since June, amid a surge in covid-19 hospitalizations, especially in the Midwest. Energy shares sank with oil prices, and technology stocks were also among the worst performers, with Microsoft Corp. down after a disappointing forecast. The VIX Index, a measure of expected U.S. equity volatility, climbed to the highest level since June.

The U.S. and European stock benchmarks are both down more than 5% this week as virus cases surge and after American lawmakers failed to agree on an economic aid package before the Nov. 3 election. Analysts are also warning about increased volatility ahead of the presidential vote and in its aftermath, with some saying that a contested outcome is still a worrisome possibility.

"We've obviously got the election hanging over our heads. Then obviously covid accelerating to the degree that it has both here in the U.S. as well as in Europe," said Lori Heinel, deputy global chief investment officer at State Street Global Advisors. "And then you've got the lack of stimulus, which in our estimation is still necessary to get us through this period until we get an ultimate medical solution. It's the triple whammy right now."

The Stoxx Europe 600 Index fell to a five-month low, losing 3% as German Chancellor Angela Merkel reached a deal for a one-month partial lockdown to curb the spread of the virus. After the market closed, France imposed a new nationwide lockdown.