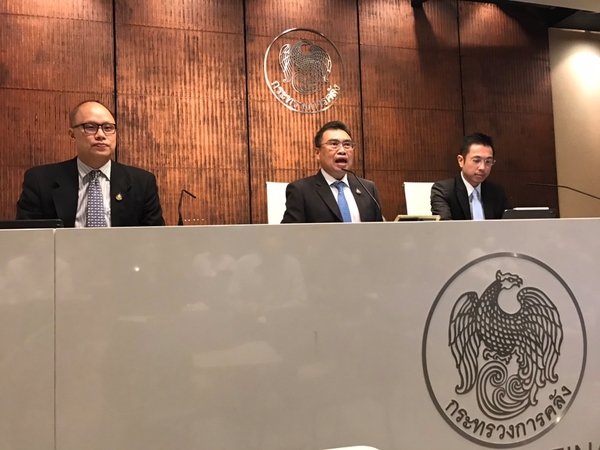 Adviser to the Fiscal Policy Office Pornchai Threeravej, centre, says the recovering Thai economy will grow by 4.5 per cent next year.

Seeing signs of recovery, the Finance Ministry has revised its economic forecast for this year, predicting a contraction of 7.7 per cent rather than the previous 8.5 per cent.

The move came after economic indicators for September released by the Fiscal Policy Office on Thursday showed improvement from the month before.

The economy is recovering in the second half of the year as Thailand’s major trading partners start to rebound from the Covid-19 crisis, while government spending shores up the local economy, said Pornchai Theeravej, adviser to the Fiscal Policy Office.

Optimism at the Finance Ministry is matched by the Bank of Thailand, which recently revised its forecast for the economy this year from -8.1 per cent to -7.8 per cent, he said.

Pornchai added he expects to see economic growth of 4.5 per cent next year.

The current account surplus is projected at $14.1 billion, equivalent to 2.8 per cent of GDP, which would contribute to economic stability, he said.

September saw VAT revenue – an indicator of consumption – increase 0.1 per cent year on year and 3.3 per cent month on month after seasonal adjustment.

Also rising from August were car sales (32.6 per cent) and newly registered motorcycles (0.7 per cent), though they fell 12.2 per cent and 0.2 per cent from the same period last year. Consumer confidence, however, fell slightly to 50.2 from August due to political protests in September.

Looking ahead, downside risks are surging from a leap in Covid-19 infection rates in many countries, the US presidential election on November 3 and the Brexit deal.

However, Fitch said it was closely monitoring Thailand’s rising household debt and political unrest for signs it may adversely impact effective policy implementation and economy growth in the mid-term.