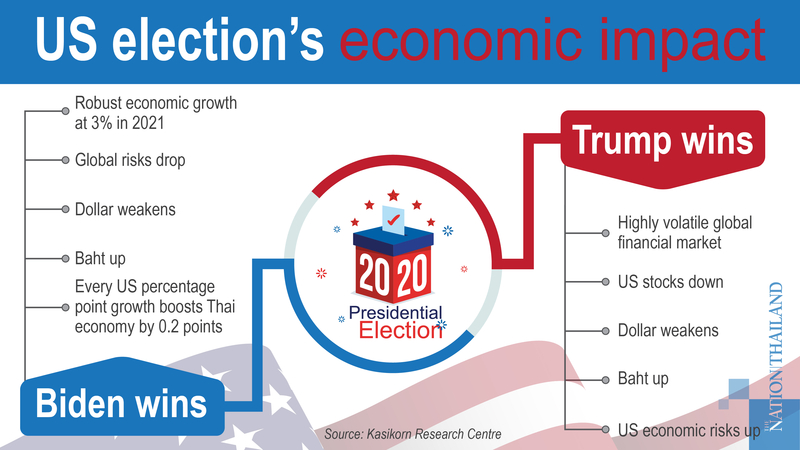 If Democratic candidate Joe Biden wins the US presidential election as polls predict, it will be a boon for US, global and Thai economies, said Kasikorn Research Centre.

Americans are voting in the high-stakes election on Tuesday, though about 100 million have voted in advance.
The research house forecast that a Biden victory would lead to robust US economic growth of 3 per cent-plus in 2021. Democrats are expected to win majorities in both houses, which would enable a Biden administration to pass the budget bill and economic policies smoothly, boosting the US economy, according to Kasikorn Research.
Global economic risks would also drop under Biden, while the baht would strengthen from its current rate of Bt31.15/dollar.
“Every 1 percentage point of US growth will translate into Thai economic growth of 0.2 points,” said the research house.
A Biden win would also see a 10-20 per cent surge in Thai exports to the US, it forecast.
However, if Donald Trump wins a second term, global markets would be hit by high volatility with US stocks falling, said the research centre.
The US economy would face more downside risks, while economic growth would be lower than 2 per cent next year. The dollar would weaken and the baht rise – but less than if Biden won. Thai exports to the US market would grow at less than 5 per cent.
However, a more cautious view of the next US presidency’s impact on Thailand was offered by Amonthep Chawla, head of research at CIMB Thai Bank.
He said that if Trump wins, the US-China trade war may not escalate as the US had little room to raise duties further on Chinese imports. But trade disputes would shift to tension over technology. Trump’s policies would encourage more Chinese tech factories relocate to Thailand. And as Thailand is part of China’s production chains, Thailand needs to take advantage by joining the Regional Comprehensive Economic Partnership (RCEP), he said.
If Biden wins, Thailand should instead join the Comprehensive and Progressive Agreement for Trans-Pacific Partnership (CPTPP), he added.
Trade tensions between the US and China are unlikely to ease under Biden, but Chinese factories would be less likely to shift to Thailand.
Amonthep said both Biden and Trump favoured nationalistic policies over free trade, promoting US-made goods and job-creation.
He predicted their stance would result in de-globalisation and the US losing its status as the world’s largest economy to China in the next 10 years.
A Biden win would see the baht rise to Bt29-30 against the dollar, as he would borrow more money to boost the US economy, Amonthep predicted. A Trump win would push the baht up to Bt30/dollar from its current level just above Bt31.
Thailand needs to have a strong trade relationship with both China and the US, he added.