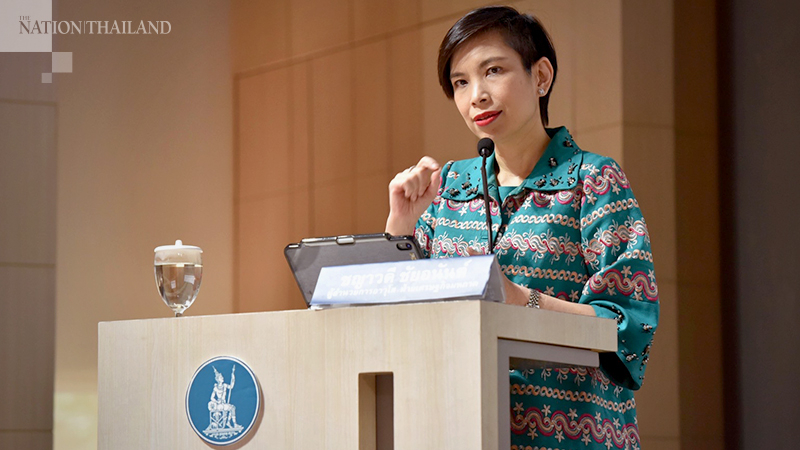 Chayawadee Chai-Anant, senior director at the Bank of Thailand (BOT)

In October this year, Thailand’s economy contracted at a higher rate compared to the previous month due mainly to the fading of temporary factors and last year’s high base effect, Chayawadee Chai-Anant, senior director at the Bank of Thailand (BOT), said on Monday.

Private consumption indicators contracted after experiencing a marginal expansion in September, as the temporary factor of special long holidays came to an end. The value of merchandise exports excluding gold continued to rise from the previous month, but contracted at a higher rate compared to the same period last year partly due to 2019’s high base effect.

Base effect is the distortion in a monthly inflation figure that results from abnormally high or low levels of inflation in the same month the previous year. A base effect can make it difficult to accurately assess inflation levels over time.

She added that private consumption indicators contracted after experiencing a marginal expansion the previous month, due to a decline in almost all spending categories. After the temporary factor of special long holidays came to an end coupled with last year’s high base effect during which the government implemented economic stimulus measures, spending on non-durable goods and services softened. Non-durables index contracted 3.5 per cent in October compared with 2.3 per cent growth the month before and services index contracted 24.2 per cent compared with 22 per cent contraction in September. However, the durables index contracted 4.5 per cent, slightly better than 4.8 per cent contraction in September.

The central bank said the overall private consumption continued on a recovery path, consistent with a gradual improvement of factors supporting consumer purchasing power including employment, farming and non-farming income as well as consumer confidence, together with new economic stimulus packages launched by the government.

Public spending, excluding transfers, contracted 6.2 per cent year on year after continuously expanding in preceding periods, as a result of the delayed disbursement of current expenditures. Nevertheless, capital expenditures of the government and state enterprises continued to expand and support economic recovery.

The value of merchandise imports dropped by 12.1 per cent from the same period last year. Excluding gold, the value of merchandise imports contracted by 9.9 per cent. In comparison to the previous month, a higher contraction was observed in almost all categories including fuel, consumer products and capital goods, consistent with the contraction of domestic spending.

The number of tourist arrivals contracted 100 per cent year on year as travel restrictions remained in place. Although the government began to allow foreigners holding the Special Tourists Visa (STV) to visit Thailand, the number of foreign arrivals was still small.

On the overall economic stability, headline inflation was less negative mainly due to an increase in energy prices. Core inflation decreased partly due to the sales promotion offered by entrepreneurs. Labour market continued to improve, in terms of both employment and income, but remained vulnerable. This was partially reflected by high unemployment and the elevated number of jobless claims in the social security system. The current account surplus decreased to $1 billion from $1.3 billion in September due to a higher deficit of net services, income and transfers while a surplus of trade balance stayed nearly the same.