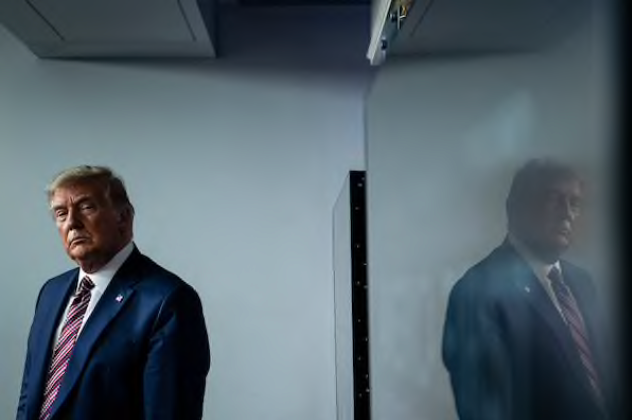 President Donald Trump isn't letting his election loss stop him from beating up on China.

On Wednesday alone, his administration restricted travel visas for members of the Chinese Communist Party and banned cotton imports from a military-linked firm it accused of "slave labor." He's also expected to soon sign a bill passed by the U.S. House of Representatives that could ultimately lead to Chinese companies getting kicked off American exchanges.

The question now is just how bad things could get in the next seven weeks before President-elect Joe Biden takes over. Trump's administration faces a mid-December deadline to name banks who do business with officials accused of undermining Hong Kong's autonomy, and could sanction others -- including possibly more senior party members.

"Trump's measures will box Biden in," said Shi Yinhong, director of the Center on American Studies at Renmin University of China and an adviser to the Chinese government. "It's a constant escalation. The starting point for negotiations keeps rising. It's unlikely for the U.S. side to return to a time before decoupling."

For Biden, the moves could either be seen as adding leverage against the Chinese or potentially tying his hands. The long-time senator and former vice president told the New York Times this week he would conduct a full review in consultation with U.S. allies before making big moves on China, including whether to rework the "phase-one" trade deal reached between the world's biggest economies in January.

Trump's moves this week are likely to further strain a relationship already roiled by a trade war, intensified geopolitical competition, and mutual recriminations about the origins of the covid-19 pandemic. Secretary of State Mike Pompeo said in November that the U.S. was "not finished yet" when it came to getting tough on China, describing the Communist Party as a "Marxist-Leninist monster" whose rule is "authoritarian, brutish and antithetical to human freedom."

On Wednesday, the House approved legislation with bipartisan support that would allow U.S. inspectors to review the financial audits of Chinese companies and require them to disclose whether they were under government control. The U.S. Department of Homeland Security also said that customs officers would impound "shipments containing cotton and cotton products originating from" the Xinjiang Production and Construction Corps, a military-affiliated entity that's one of China's largest producers.

Under the new visa rules, Communist Party members and their immediate families would be restricted to single-entry visas, which will be limited to one month. Previously, party members could obtain multiple-entry visitor visas as long as 10 years in duration.

"The CCP and its members actively work in the U.S. to influence Americans through propaganda, economic coercion, and other nefarious activities," a U.S. Embassy spokesperson said in an emailed statement. "For decades we allowed the CCP free and unfettered access to U.S. institutions and businesses while these same privileges were never extended freely to U.S. citizens in China."

While Foreign Ministry spokeswoman Hua Chunying said she wasn't aware of the visa actions, she urged the U.S. to reverse course. "China lodges representations with the U.S. side and we hope people in the U.S. will adopt a common rational view toward China and give up their hatred and abnormal mindset toward the CCP," Hua told a regular news briefing Thursday in Beijing.

The new visa rules fit with the Trump administration's efforts to create tension between the ruling party and the broader Chinese population. Chinese President Xi Jinping has sought to make the party more central in every day life, echoing Mao Zedong's edict that the party leads everything -- "east, west, south, north and center." In September, Xi vowed to "never allow any individual or any force to separate the CCP and Chinese people, and to pitch them against each other."

The Communist Party has around 92 million members, including national and local government leaders. Its ranks also include millions of business people, such as China's third-richest man, Jack Ma, co-founder of Alibaba Group Holding, and members of the media and academia. It could also impact the children of party members, many of whom study in the U.S.

"We don't know if Biden would agree with these moves," said Shi, the adviser to China's government. "Even if he doesn't, he is more limited in what he can do after the policies are in place."