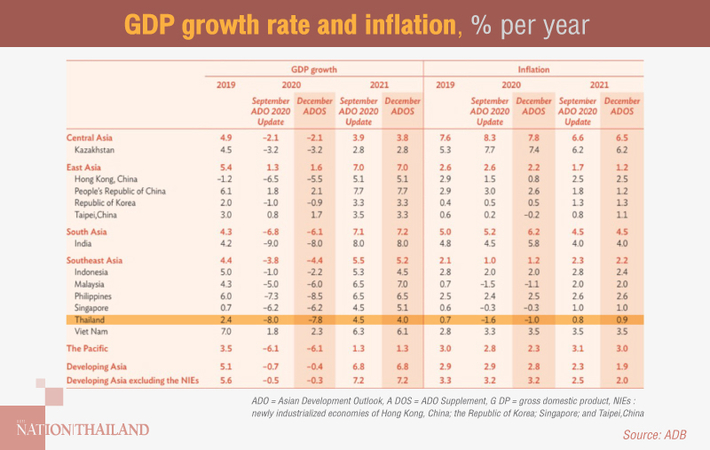 The Thai economy will grow 4 per cent next year – more than 1 percentage point lower than Southeast Asia’s average, according to the latest forecast by the Asian Development Bank (ADB).

On Thursday, the bank downgraded the Asean region’s outlook for 2021, with Southeast Asia now expected to grow 5.2 per cent next year compared to 5.5 per cent forecast in September.

The ADB also downgraded its 2020 GDP forecast for Southeast Asia to -4.4 per cent from -3.8 per cent in September. It projects the Thai economy this year will contract 7.8 per cent, down sharply from 2.4 per cent growth last year.

The ADB’s 2020 GDP forecast for developing Asia is raised to -0.4 per cent, with 6.8 per cent growth expected in 2021 as the region continues to recover from the Covid-19 crisis.

The new 2020 GDP forecast, published in a supplement to the Asian Development Outlook (ADO) 2020 Update, is an improvement from the -0.7 per cent forecast in September, while the outlook for 2021 remains unchanged.

However, prospects are diverging within the region, with East Asia set to grow this year while subregions including Southeast Asia contract.

East Asia is the exception, with an upgraded growth forecast of 1.6 per cent for 2020 on the back of faster than expected recoveries in China and Taiwan. East Asia’s growth outlook for 2021 is maintained at 7 per cent.

“The outlook for developing Asia is showing improvement. Growth projections have been upgraded for [China] and India, the region’s two largest economies,” said ADB chief economist Yasuyuki Sawada. “A prolonged pandemic remains the primary risk, but recent developments on the vaccine front are tempering this. Safe, effective, and timely vaccine delivery in developing economies will be critical to support the reopening of economies and the recovery of growth in the region.”

Exports are rebounding quickly from substantial declines in the second quarter, said the bank. Mobility is also returning to pre-pandemic levels in East Asia and the Pacific, though recovery in tourism is likely to be delayed, it added.