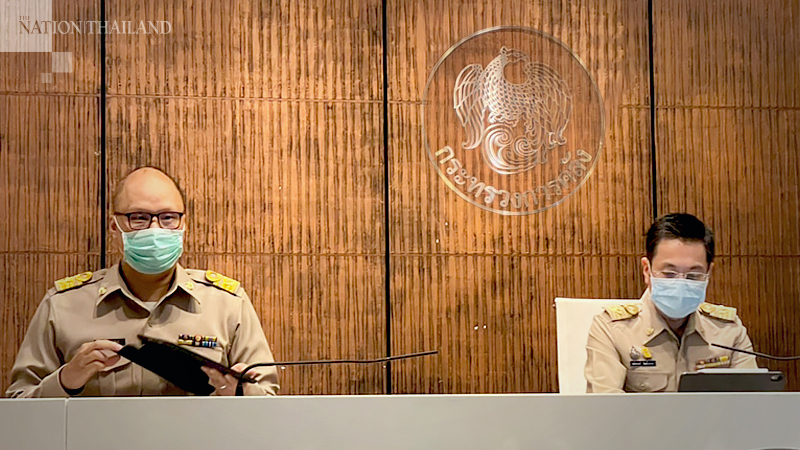 Pisit Puapan, left, executive director of the macroeconomic policy bureau at the Fiscal Policy Office (FPO), and Wuttiong Jittungsakul, fiscal policy adviser, report on the state of the economy in November on Monday.

Collection of VAT, an indicator of private consumption, rose 2.5 per cent from the previous month while contracting 6.5 per cent year on year (YoY) – a big improvement on the 9.4 per cent contraction in October.

Auto sales in November increased 8.7 per cent from October and contracted 7.2 per cent year on year, significantly improving from the 25.9 per cent YoY contraction in October, he said.

As for private spending, commercial vehicle sales rose 8.2 per cent year on year, for a third consecutive month in growth. However, the growth rate decelerated from 10.4 per cent and 13.5 per cent in October and September respectively.

Imports of capital goods expanded 6.2 per cent month on month, but contracted 3.2 per cent YoY, compared with 17 per cent yearly contraction in October.

Cement sales grew 10.8 per cent from the month before but contracted 1.5 per cent YoY – better than the 9.1 per cent contraction in October.

Government spending, which is a key driver of the economy, increased 100.6 per cent year on year to Bt363.8 billion.

Consumer confidence also grew in November, with the spending sentiment index up 52.4 to reach its highest level in nine months after the second consecutive monthly increase.

Meanwhile, Pisit Puapan, executive director of the macroeconomic policy bureau, said most on Thailand’s regional economies also expanded in November on the month before.

The economic situation in the Northeast, Central Region, Greater Bangkok, East and South improved from October. However, economic conditions in the West and North stayed flat in November compared with October.