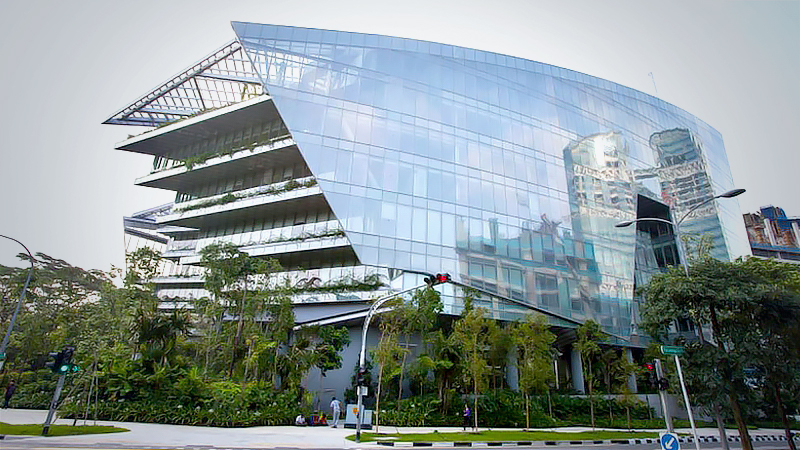 Lucasfilm's facility in Singapore is modeled after the Sandcrawler, a fictional vehicle in the "Star Wars" films. MUST CREDIT: Bloomberg photo by Nicky Loh

Blackstone Group Inc. is looking to purchase Lucasfilm's building in Singapore for about $132 million (S$175 million), according to people familiar with the matter.

The company has started the process of buying the building known as The Sandcrawler, pending regulatory approval, the people said, requesting not to be named because the matter is private.

The move signals Singapore's property assets continue to be attractive to foreign investors, who see the city's political, financial and legal stability as an advantage. Other American companies including Amazon.com Inc. and Facebook Inc. are also expanding their presence, while China's tech behemoths like Tencent Holdings Ltd. and ByteDance Ltd. are looking to make Singapore a beachhead for Southeast Asia.

The facility, located in central Singapore, has eight floors of office space. It also includes a retail shopping area, a 100-seat theater and lush gardens which accent its modern exterior. The building opened to much fanfare in September 2013, with Lucasfilm founder George Lucas and the city-state's Prime Minister Lee Hsien Loong attending the launch.

Modeled after the Sandcrawler, a fictional vehicle featured in the "Star Wars" films, the building was used as the regional headquarters for the digital animation studio and also served as the base for The Walt Disney Company (Southeast Asia).

Singapore's home prices are also seeing a recovery, rising to the highest in more than two years last quarter. The country forecasts a recovery from its worst recession since independence as covid vaccinations are rolled out and restrictions eased.