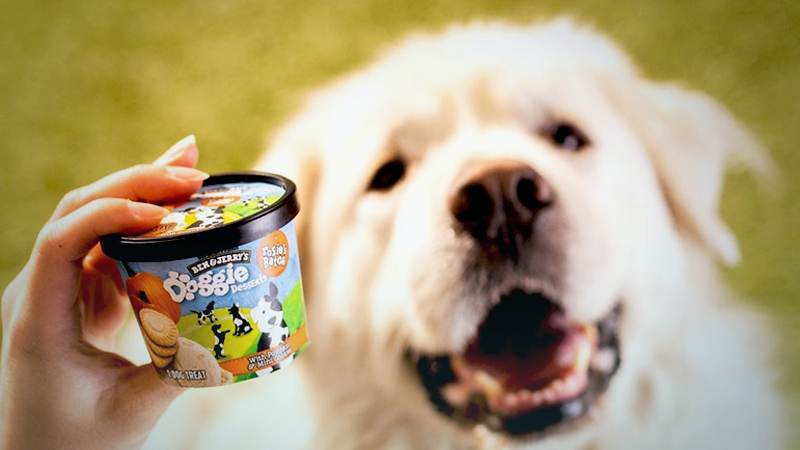 How do we know we've planted our flag at the pinnacle of pet obsession? One of the best-known premium ice cream companies has gone to the dogs.

Ben & Jerry's this week announced the debut of Doggie Desserts: four-ounce cups of mostly nondairy frozen treats, one featuring pumpkin with cookies and another with peanut butter and pretzels. It's nondairy because some dogs, like some people, don't tolerate lactose well; the base is sunflower seed butter, the same as Ben & Jerry's nondairy frozen confections for humans.

And therein is the essence. During the pandemic, ice cream sales have surged. Over the 52 weeks ending Sept. 6, in-home ice cream expenditures were up 13.4 percent and unit sales increased by 8.4%, according to data from Chicago-based market research firm IRI.

Creamy, frozen treats have provided succor during these difficult times. And we want man's best friend to be right there with us on the couch, eating our feelings.

The urge to anthropomorphize and accessorize the animals we live with has gained steam. Between 2013 and 2019, pet stuff has been one of the fastest-growing spending categories, according to U.S. Bureau of Labor Statistics' Consumer Expenditure Surveys.

Spending on dog treats alone has jumped 44% from 2015 to 2020, with pet owners spending $5.5 billion on them last year, according to data firm Euromonitor.

This is not news to Ben & Jerry's, and its parent company, Unilever, a titan in the ice cream business. (Its brands dominate the freezer aisle: Magnum, Breyers, Klondike, Talenti, Good Humor and Popsicle.) There have been ice creams for dogs in the past - Frosty Paws, Pooch Creamery, Dairy Queen offers a Pup Cup and Starbucks whips up Puppuccinos so you can watch them scoot the cup around the floor - but this represents the first nonhuman foray into the "super-premium" category.

Lindsay Bumps, global marketing specialist for Ben & Jerry's and a certified veterinary nurse, says the idea for the product surfaced last February, right before the pandemicreached the United States.

"Treats are such a big category. I might go to the vet with my dog and he did so great I want to take him for a Pup Cup," she said (companion: a French bulldog named Spock). "It normally takes about 12 months to launch a product, but we had to adjust our ways of working, because we all started working from home."

Nonetheless, the project entailed a flavor guru (her companion: a Great Pyrenees named Boone who prefers the pumpkin flavor), the innovation team, a nutrition consultant, a regulatory consultant and lengthy negotiations over flavors and size.

Then there was the focus-grouping: According to Bumps, in ordinary times, the Ben & Jerry's Vermont headquarters has an average of 40 "Canine to Fivers" on premise any given day. Still, these work-from-home dogs weighed in.

Cat owners are restive now. What about us? According to Bumps, dogs have receptors for sweet like humans, while cats do not. Sweet feline folderol would be lost on them.

Bumps suggests trying the product out slowly on pooches, scooping a little into a bowl to see how it is digested. There are no verboten ingredients, such as chocolate or coffee, but it's still a good idea to take it slow. She says more flavors will probably be added down the pike.

The treats - offered in mini-cups or multipacks priced between $2.99 and $4.99 - will debut next week but won't be located in the B & J section next to Cherry Garcia or Chunky Monkey. They will be in the frozen "novelties" section next to bars and ice cream sandwiches. Might a human eat them by mistake?

"They are very clearly for dogs, with dog tags for the flavor names," Bumps says, and the stories of the flavors' namesakes, Ben & Jerry's staff dogs Pontch and Rosie, on the back.

But what if you accidentally grabbed a cup for yourself?

"You can absolutely eat them. I've tried," Bumps says. "They are delicious."