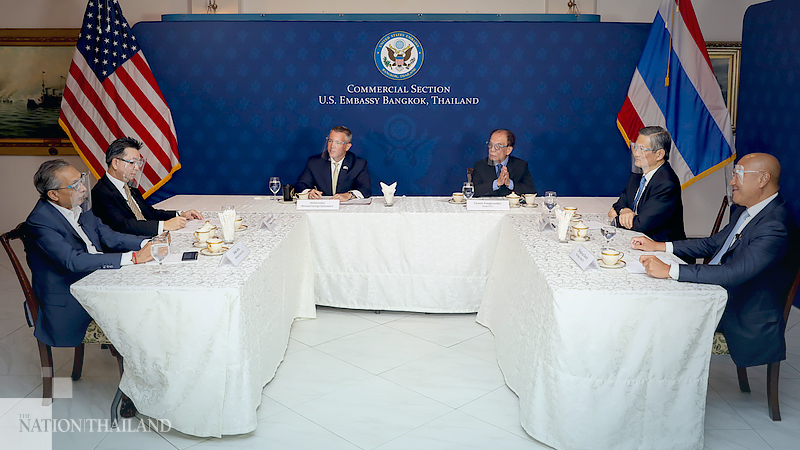 Thai investors revealed how they had made successful investments in the US and why they were not worried about political turmoil during the transition from President Donald Trump to President-elect Joe Biden.

US Ambassador to Thailand Michael George DeSombre hosted a virtual seminar on Thursday on ‘SelectUSA: Helping Thai Companies Go Global,’ to give Thai companies information they needed before expanding their business to the US and abroad.

Thai investors who have business presence in the US  are optimistic about the US economy going forward, despite the political divide that led to rioters besieging the Capitol ealier this month.

Thai investors ranging from manufacturing to the financial services sectors aired their views during the virtual seminar and press conference in Bangkok.

The seminar in Bangkok took place after Trump’s supporters stormed the Capitol building on January 7 while members of Congress were convening to certify the presidential election outcome. The four years of the Trump administration has been seen by critics as promoting nationalism and undermining multilateral organisations such as the World Trade Organisation, in order to gain support from voters who were discontent with globalisation.

DeSombre assured that the US transition period would not raise any challenge for Thai and other businesses investing in the US.

“I think obviously any change in administration may certainly involve change in policies, but the US is always the largest destination for foreign direct investment in the world and I don’t see that changing,” he said.

Chartsiri believes that globalisation will continue and regionalism and localisation will move in parallel, creating business opportunities. He said that there may be some changes in supply chains but overall development is positive for Thailand, Asean and other countries. Bangkok Bank has a branch in New York.

Boonchai said CP group is a strategic investor and takes a long-term view. CP's investment must benefit the host country, community and the company's shareholders, he emphasised.

He said he was optimistic that his company saw potential to expand its shrimp market in the US. CP Group has been making other investments in the United States. In 2016, the firm bought Bellisio Foods Inc, maker of Chili’s At Home and Boston Market frozen foods, for about $1.1 billion. CP also has recently started investing in a shrimp farm in Florida.

Boonchai said CP foresaw the potential of the shrimp market in the US due to American consumers' appetite for shrimp.

Aloke, acclaimed for mergers and acquisitions, said that the world’s leading chemical company has been using Thailand as base for expanding investment into the global market. Diversification is the key as we don’t want to rely too much on one country or a region and investment abroad means also move production base close to customers.

Chanin recounted that Banpu first started a small scale energy business in the US before scaling it up. Energy conglomerate Banpu has invested in shale gas production in Pennsylvania and Texas in the United States. Fossil fuel businesses remain promising as it will take a long time before renewable energy could prevail, he said. The problem with renewable energy such as solar and wind power is their supply is not stable. While Biden may issue policies to support green energy, the US has to look at the experience of other countries, such as Germany, due to unstable renewable energy supply, he pointed out.

Thirapong said he went to the US when he was 31 years old and his food company was small when he made his first investment in the US. He attributed his successful investment in the US to cost advantage in food manufacturing and acquiring of strong local brand names. He, however, said that the company had shifted focus to Asia recently.

“After 24 years investing in US and 10 years in Europe, we have now shifted our focus to the Asia Pacific region due to the region’s higher economic growth rate,” he said.

Thai investors shared views that US is the world’s largest market with superior technology. But they warned that the US market is very competitive so Thai investors looking to invest, must have their own competitive advantage.

Investors have to make sure they comply with laws and regulations as different states have different sets of rules. And it is the most challenging to deal with US customers, because companies could face lawasuits, Thirapong warned.

Post the Covid-19 pandemic, DeSombre predicted more mergers and acquisitions in the US and other countries as the pandemic had led to many deals being stuck.

Regarding attracting foreign investors to invest in Thailand, DeSombre said that he is very encouraged by Thai authorities recognising the urgent need to relax visa rules in order to make it much easier for talent workers and their family members to work and stay in Thailand.